Ohtani walked Lowrie on four pitches leading off the seventh and then walked Mitch Moreland. Chapman followed with a soft single to left that Upton struggled to pick up, allowing Lowrie to score easily. Seth Brown added an RBI single.

Elvis Andrus had two hits to help the A’s to their third straight win. 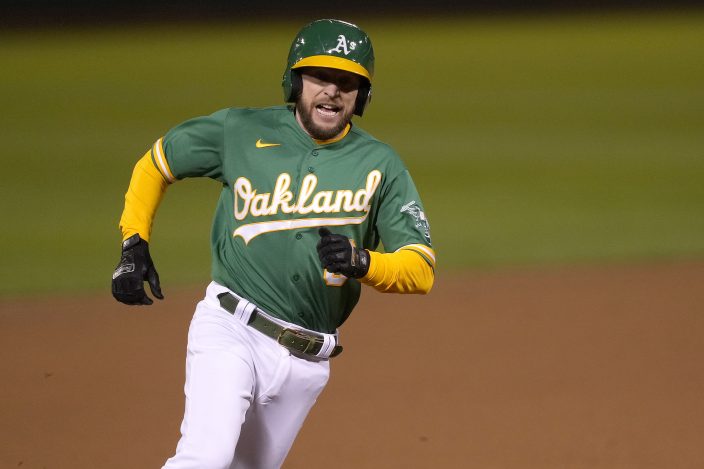 Oakland Athletics' Jed Lowrie rounds third base to score on a single by Matt Chapman during the seventh inning against the Los Angeles Angels in a baseball game Friday, May 28, 2021, in Oakland, Calif. (AP PhotoTony Avelar)

Ohtani (1-1) was scratched from his scheduled start Thursday after getting stuck in a traffic jam coming from San Francisco that delayed his arrival to the Oakland Coliseum.

Although Ohtani didn’t seem bothered by getting pushed back a day — “I think he slept here last night,” Angels manager Joe Maddon joked before the game — the A’s eventually wore him down.

Ohtani allowed three earned runs and three hits but had control problems late. He walked four and hit Mark Canha with a pitch in the back three innings after a similar fastball that just missed Canha had players from both teams streaming onto the field.

Oakland Athletics first baseman Matt Olson (28) steps to the bag to complete the double play against Los Angeles Angels' Jared Walsh (20) during the fifth inning of a baseball game Friday, May 28, 2021, in Oakland, Calif. Justin Upton was out at second base. (AP PhotoTony Avelar)

David Fletcher had an RBI single in the seventh, ending the Angels' 18-inning scoreless funk.

The win was Melvin’s 708th as A’s manager, tying him with current White Sox skipper Tony La Russa for most in Oakland history. Connie Mack owns the franchise record with 3,582 victories.

Yusmeiro Petit (7-0) retired four batters to win. Lou Trivino pitched the ninth for his seventh save.

Angels: SS José Iglesias was placed on the injured list but took batting practice before the game. Iglesias left Tuesday’s game against Texas with a left hamstring strain. 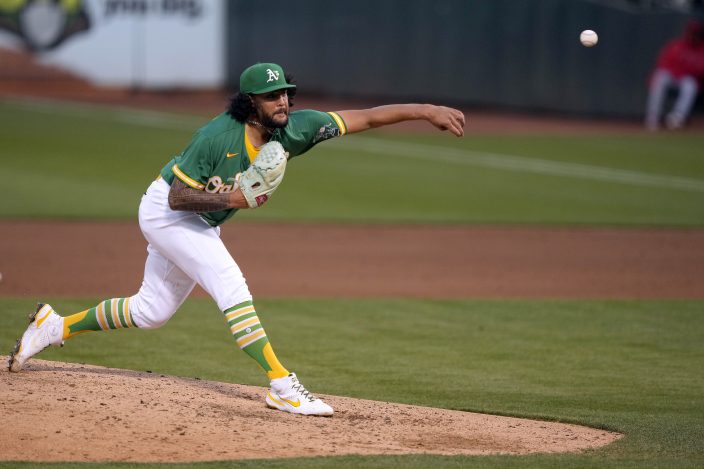 Athletics: CF Ramon Laureano was held out because of right groin tightness. ... A.J. Puk was reinstated from the injured list and optioned to Triple-A Las Vegas. The lefty will initially work out of the bullpen on his way back from a strained left biceps injury. … LHP Reymin Guduan was placed on the 10-day IL because of a strained right groin. Jordan Weems was recalled from Las Vegas.