David Fletcher doubled twice and had two RBIs. Taylor Ward added two hits to help the Angels win their second straight for a split of the four-game series with their division-leading rivals.

Matt Olson and Sean Murphy drove in runs for the A’s. Oakland ended its streak of two games without an extra-base hit but failed to capitalize on Angels starter José Quintana’s early command issues. 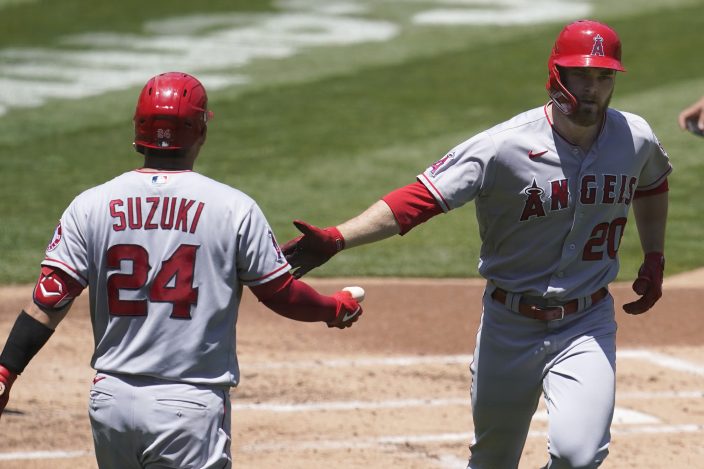 Los Angeles Angels' Jared Walsh, right, is congratulated by Kurt Suzuki after hitting a solo home run during the second inning of a baseball game against the Oakland Athletics in Oakland, Calif., Sunday, May 30, 2021. (AP PhotoJeff Chiu)

Walsh homered off Cole Irvin (3-7). Kurt Suzuki and Ward followed with consecutive singles and after Kean Wong’s sacrifice, both scored on Fletcher’s double down the left-field line. Phil Gosselin singled to make it 4-0.

Irvin allowed four runs and six hits in six innings with three strikeouts. The lefty is winless since May 4. Oakland Athletics shortstop Elvis Andrus, right, throws to first base after forcing Los Angeles Angels' Kean Wong out at second base during the fourth inning of a baseball game in Oakland, Calif., Sunday, May 30, 2021. (AP PhotoJeff Chiu)

The A’s scored twice in the third when Quintana walked three straight after Fletcher’s throwing error from shortstop on Mark Canha’s leadoff grounder. Murphy had a sacrifice fly.

Quintana, whose last victory came Sept. 5, 2019, while with the Cubs, had five strikeouts and four walks in three innings. He allowed two hits and a pair of unearned runs. Angels cleanup hitter Juan Lagares hit a foul ball in the fifth inning that shattered a window at the Shibe Park Tavern in the second deck of the Coliseum. Pieces of glass fell onto several rows of seats and fans were relocated. Glass continued to fall down before workers knocked the remaining pieces out. An A’s spokesman said no fans were injured.

The Coliseum is the third-oldest ballpark in the American League. The A’s were recently given permission by MLB to look at alternative cities for possible relocation. Los Angeles Angels' Jose Quintana pitches against the Oakland Athletics during the first inning of a baseball game in Oakland, Calif., Sunday, May 30, 2021. (AP PhotoJeff Chiu)

Angels: OF Justin Upton was given the day off.

Athletics: LHP Jesús Luzardo was activated from the injured list and will initially work out of the bullpen. He pitched a hitless inning. Luzardo went on the IL with a fractured left pinkie on May 2, an injury sustained while playing a video game. “He’s up for anything and we’ll see how it plays out,” manager Bob Melvin said. … OF Ramón Laureano missed a third consecutive game with a right groin strain but the A’s are hoping to avoid placing the center fielder on the IL. … RHP J.B. Wendelken (strained left oblique) has progressed to playing catch from 120 feet. … RHP Jordan Weems was optioned to Triple-A Las Vegas. 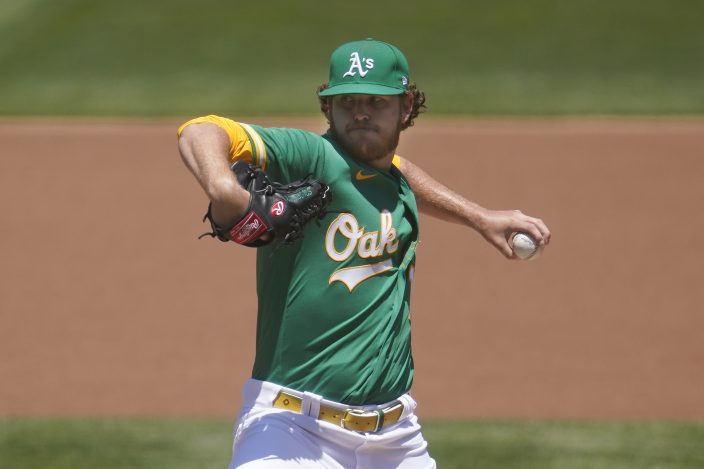 Oakland Athletics' Cole Irvin pitches against the Los Angeles Angels during the first inning of a baseball game in Oakland, Calif., Sunday, May 30, 2021. (AP PhotoJeff Chiu)

Angels: RHP Dylan Bundy (0-5, 6.50 ERA) faces San Francisco on Monday and is attempting to end his career-high nine-start losing streak. Bundy last pitched at Oracle Park in 2016 while with the Baltimore Orioles.

Athletics: RHP James Kaprielian (2-0, 1.53) pitches the opener of a three-game series in Seattle on Monday. Kaprielian has allowed two runs or fewer in each of his previous three starts.