A senior Hamas official said Monday that Israel must halt its “aggression” in both Gaza and Jerusalem if it wants calm following an 11-day war earlier this month.

Khalil al-Haya spoke after meeting with Egypt's intelligence chief Abbas Kamel, who visited Gaza after meeting with Israeli Prime Minister Benjamin Netanyahu on a trip aimed at shoring up an informal cease-fire brokered by Cairo.

Kamel, who has not given public statements, is the highest-ranking Arab official to visit Gaza since 2018. He met with Yehiyeh Sinwar, the top Hamas leader in Gaza. 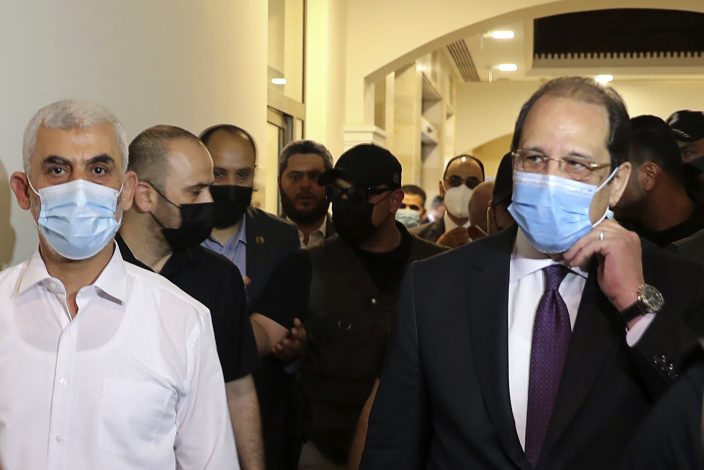 Yehiyeh Sinwar, left, the top Hamas leader in Gaza, and the head of the Egyptian General Intelligence Abbas Kamel, right, walk as they meet in Gaza Monday, May 31, 2021. (Mohammed SalemPool Photo via AP)

The war, which was halted by a cease-fire on May 21, was triggered by weeks of protests and clashes in Jerusalem over Israel's policing of a flashpoint holy site and efforts by settler groups to evict Palestinian families in the nearby Sheikh Jarrah neighborhood. More than 250 people were killed, the vast majority of them Palestinians living in Hamas-ruled Gaza.

“We discussed several files, most importantly the necessity to oblige the occupation to stop its aggression on Gaza, Jerusalem, Sheikh Jarrah and all over Palestine," al-Haya told reporters. He said Israel must also fully lift the blockade it imposed on Gaza when Hamas seized power from rival Palestinian forces in 2007.

“If this happens, then calm and stability could return,” he said. 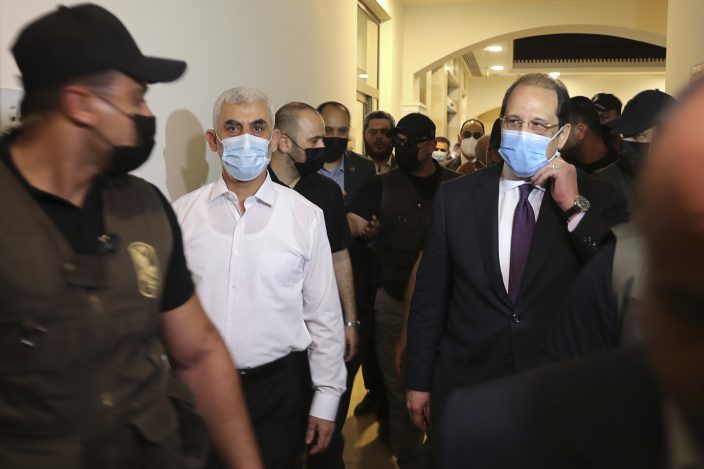 Yehiyeh Sinwar, second left, the top Hamas leader in Gaza, and the head of the Egyptian General Intelligence Abbas Kamel, right, walk as they meet in Gaza Monday, May 31, 2021. (Mohammed SalemPool Photo via AP)

Al-Haya ruled out linking Gaza's reconstruction to Hamas' release of two Israeli civilians and the remains of two Israeli soldiers killed in an earlier war. Instead, the militant group is likely to demand the release of a large number of Palestinian prisoners held by Israel.

The Egyptian-brokered truce has held but did not address any of the underlying issues of the Israeli-Palestinian conflict. Israel and Hamas have fought four wars since 2008.

On Sunday, Israeli troops shot a Palestinian man who sneaked into the country from the Gaza Strip with a knife. The military confirmed the incident on Monday but did not provide details on his condition. 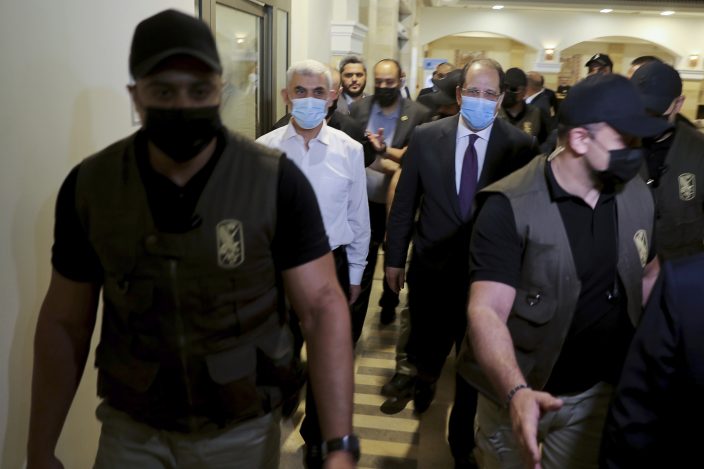 Yehiyeh Sinwar, center left, the top Hamas leader in Gaza, and the head of the Egyptian General Intelligence Abbas Kamel, center right, walk as they meet in Gaza Monday, May 31, 2021. (Mohammed SalemPool Photo via AP)

The military said the suspect carried a knife and infiltrated the fenced border near Moshav Sde Avraham, a few kilometers (miles) from the coastal territory. A security guard told Israeli media on Monday that the suspect stabbed him.

The army said the suspect had been moved to a nearby hospital but his condition was not immediately known. Israeli authorities were trying to figure out how the suspect snuck across the fenced border.

Palestinians say Israel has eased some restrictions on Gaza