After the Philadelphia 76ers lost NBA MVP finalist Joel Embiid to a sore right knee late in the first quarter Monday night, they lost their Game 4 lead — and their chance at the franchise's first playoff sweep in 36 years.

Game 5 of the best-of-seven Eastern Conference first-round series is Wednesday at Philadelphia. 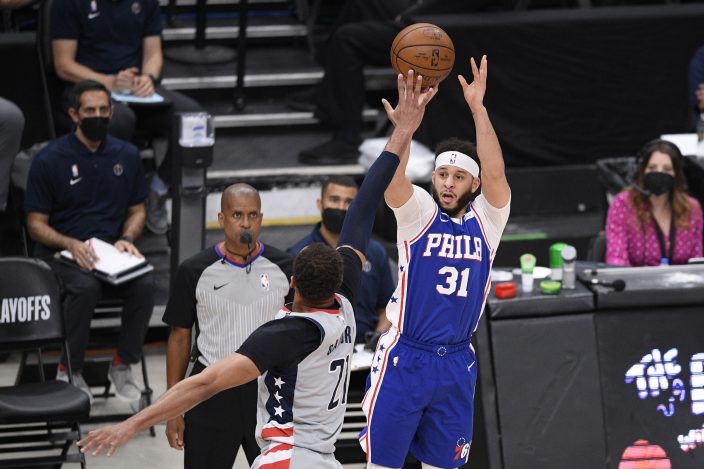 Won't be easy for that one to be as eventful as this one was, including the third-quarter sight of a fan running out of the stands and onto the court before being slammed to the ground by a security guard.

Nothing had as much of an effect on the outcome and, potentially, the rest of this postseason for Philadelphia, the East's No. 1 seed, as what happened to Embiid, who came into the night averaging better than a point per minute in the series.

In Game 3's 29-point win for the 76ers, for example, he produced a playoff career-high 36 points in 28 minutes against the Wizards, who needed to go through the play-in round just to get the No. 8 seed. 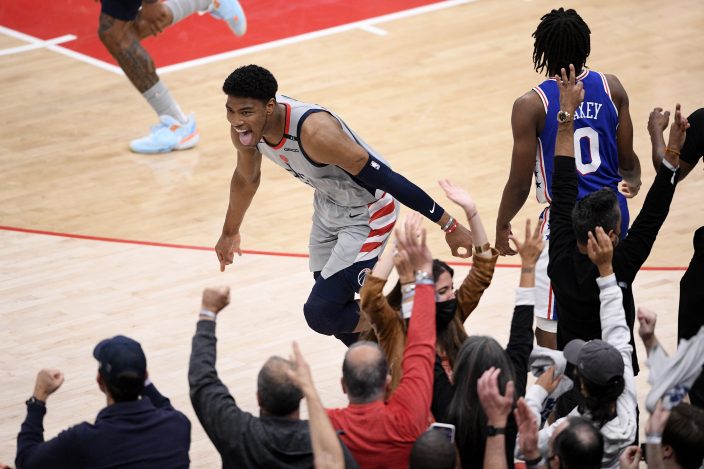 Washington Wizards forward Rui Hachimura (8) reacts after he made a three-point basket during the second half of Game 4 in a first-round NBA basketball playoff series against the Philadelphia 76ers, Monday, May 31, 2021, in Washington. 76ers guard Tyrese Maxey (0) looks on. (AP PhotoNick Wass)

But the center headed to the locker room late in the first quarter after taking a hard fall behind the baseline when his shot was blocked by Robin Lopez. Embiid tried to play on, wincing and leaning over during breaks in play, before checking out eventually and limping off.

He never returned and finished with eight points and six rebounds in 11 minutes.

Philadelphia led by as many as 11 in the opening period but that was down to 61-60 at halftime. 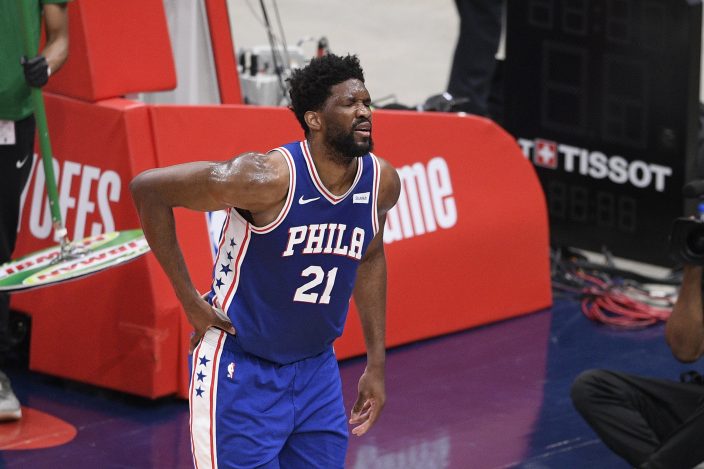 Philadelphia 76ers center Joel Embiid (21) reacts after he fell on the court during the first half of Game 4 in a first-round NBA basketball playoff series against the Washington Wizards, Monday, May 31, 2021, in Washington. (AP PhotoNick Wass)

And Washington took over briefly in the third quarter, leading by as much as 92-78 in its final minute. A back-and-forth fourth quarter was tight down the stretch after Danny Green's layup with under 4 1/2 minutes to go made it 106-all.

That's when Washington basically took the ball out of Philadelphia's hands, sending Simmons to the line repeatedly down the stretch with a version of the old Hack-a-Shaq strategy that Shaquille O'Neal used to face.

Simmons came into the night 0 for 9 on free throws in the series and was 1 for 3 for the night before Hack-a-Ben went into full effect — he made 1 of 2 tries each of the final four times he stepped to the line to end up 5 for 11. 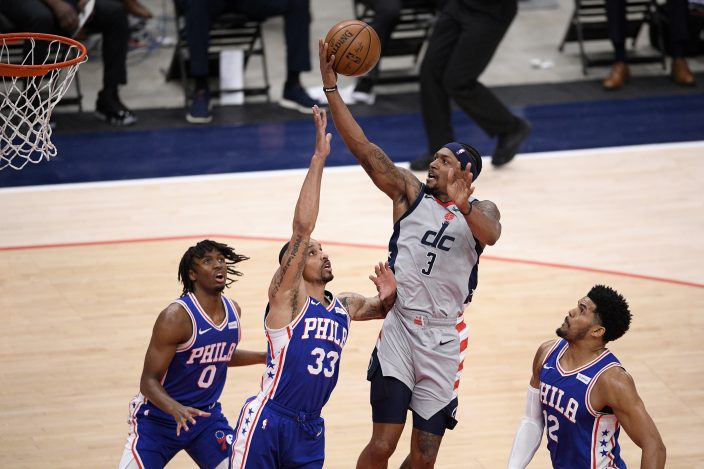 Rui Hachimura had 20 points and 13 rebounds for the Wizards, including a corner 3 off an assist from Beal to put the home team up 118-112 with 45.6 seconds left. That prompted a chant of “Wiz in 7!” from some in the crowd of 10,665 — about 50% of capacity and the most allowed under current coronavirus restrictions. 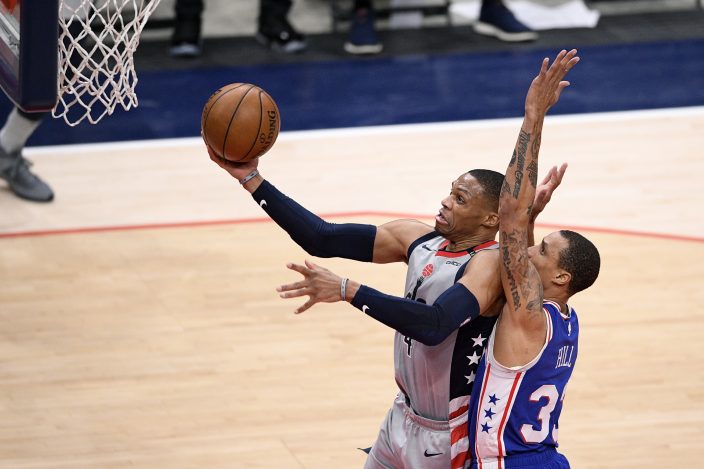 Washington Wizards guard Russell Westbrook, left, goes to the basket next to Philadelphia 76ers guard George Hill (33) during the first half of Game 4 in a first-round NBA basketball playoff series, Monday, May 31, 2021, in Washington. (AP PhotoNick Wass)

The Sixers last swept a playoff opponent in 1985 against the Milwaukee Bucks — long before Embiid or Simmons or the slogan “Trust the Process” was born.

The Wizards last were swept in 2007 by the Cleveland Cavaliers.

Wizards coach Scott Brooks, whose future is uncertain with his five-year, $35 million contract expiring, tinkered with his lineup again. After moving Davis Bertans into the starting unit to add height for Game 3, Brooks made another switch for Game 4, inserting Daniel Gafford at center in place of Alex Len.

But it was the third center who played for Washington, Lopez, who produced 16 points.

Wizards: Beal's 20-foot jumper in the opening minute allowed him to reach 1,000 career postseason points, but Washington started 0 for 6 from the field, otherwise. ... Hachimura was called for a technical foul in the third quarter. ... Bertans left in the second half with a strained right calf. He scored 15 points.