Phil Mickelson spoke of having some self-doubt in the two years leading up to his PGA Championship victory. Xander Schauffele might have contributed to that, particularly during some money games a year ago in San Diego.

They played often when golf was on pause because of the pandemic, and Mickelson mentioned one stretch at The Farms in which he said Schauffele beat him three straight days with rounds of 64, 63 and 62. Mickelson said he told his wife: “I don’t know how I’m going to beat this guy. He’s probably playing the best of any player in the world right now.”

Golf resumed, and Schauffele missed a playoff at Colonial by one shot in the first event back. Xander Schauffele chips to the 18th green in the fan area during the second round of the PGA Championship golf tournament on the Ocean Course Friday, May 21, 2021, in Kiawah Island, S.C. (AP PhotoChris Carlson)

One moment in the last game they had at The Farms stands out to both.

Mickelson decided to press on the par-3 16th hole and hit first to 4 feet. Schauffele, who should have teed off first, followed with a hole-in-one.

“He quickly went back to the tee and it’s one of the harder par 3s on the course. And he wasn’t supposed to hit first, and of course, he hits first and hit it to 4 feet,” Schauffele said. “I’m letting him know that I could make him re-hit since it’s match play. But since he was getting his butt kicked, I figured I would ... not make him.” 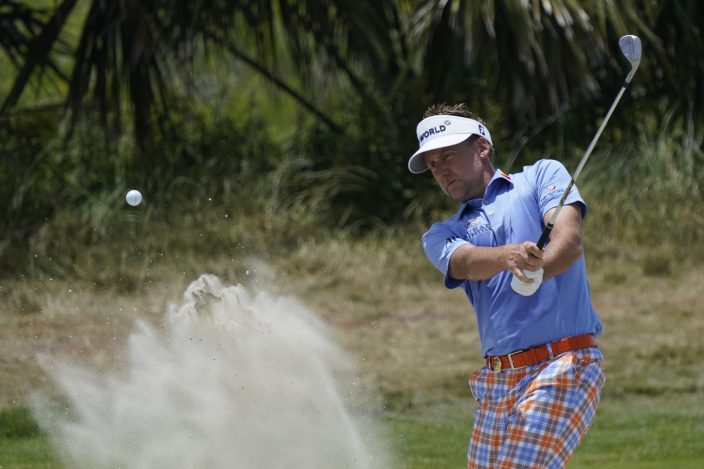 Ian Poulter, of England, works in the bunker on the fourth hole during the third round at the PGA Championship golf tournament on the Ocean Course, Saturday, May 22, 2021, in Kiawah Island, S.C. (AP PhotoMatt York)

Schauffele hit 6-iron right on line and watched it trickle in for an ace.

“He just sat there looking down at the ground, shaking his head,” Schauffele said. “He just didn’t really know what to do with himself. So I found that pretty entertaining.”

What amazed him was how many questions Mickelson was asking him, considering how much more experienced and accomplished Lefty is in the game. Schauffele said it was an example of how Mickelson, even at age 50, loves and studies the game. 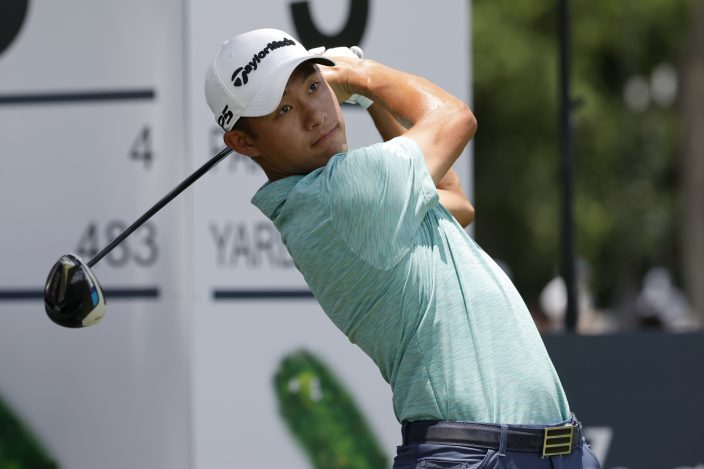 Collin Morikawa hits off the third tee during the third round of the Charles Schwab Challenge golf tournament at the Colonial Country Club in Fort Worth, Texas, Saturday May 29, 2021. (AP PhotoRon Jenkins)

“He’s so obsessive and so passionate about golf that it’s not really a surprise that he did win the PGA Championship because he’s been telling himself for the last 25 years that he’s still got it,” Schauffele said. “So really cool to play with him, and you can definitely learn a lot from what he’s done.”

Mickelson is still learning, too.

He said he noticed the calm with which Schauffele plays, how the 27-year-old used power on the holes that allowed for it and tried to keep it in play on holes that didn’t. There was a simplicity to the game. 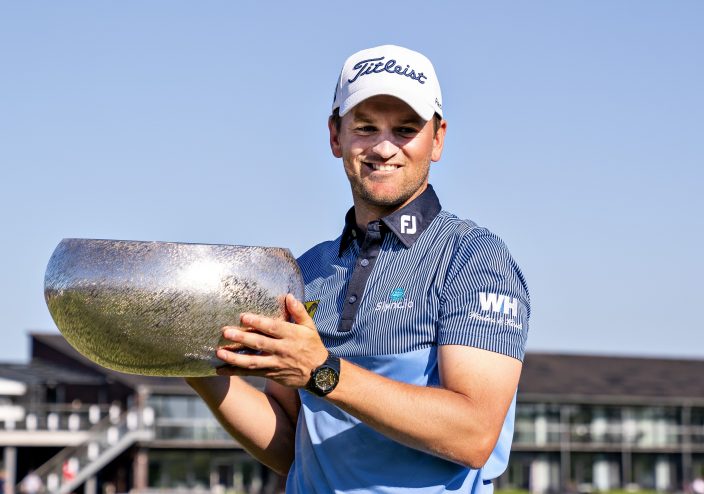 “I saw what it looked like to play at the highest level,” Mickelson said.

Before his stretch run to the PGA, Mickelson said he started posting low scores at The Farms, just like Schauffele did. But then he missed the cut at Innisbrook, had only one good round at Quail Hollow and was getting frustrated because he knew his best game was in there.

“Then to hold it together and play some really good golf over 72 holes (at Kiawah Island) meant a lot because I had seen the progress but I had not seen the results,” Mickelson said. “So that’s why I say I had a belief, but until you actually do it, it’s tough to really, fully believe it.”

Four years later, it has become increasingly difficult to find male players who have no interest in going to the Olympics.

Xander Schauffele and Collin Morikawa were the latest to declare their intentions of competing for medals in Japan this summer, even with the likelihood of not being able to move around the country to watch other events.

With three weeks left before Olympic qualifying for golf ends, Morikawa and Schauffele would occupy the final two spots for the U.S. team.

Dustin Johnson and Adam Scott have withdrawn their names from the ranking.

“If I get in, I will definitely go,” said Schauffele, whose mother was raised in Japan and whose grandparents live there. “It’s something new, something I’ve never accomplished. Once the Olympics were announced for golf, it’s something my dad and I discussed. And so it would be a true honor to compete.”

Morikawa said he would never give it a second thought.

“It gets me excited and I would love to be there,” he said.

Golf returned to the Olympic program in 2016 in Rio de Janeiro. With so much concern about the Zika virus, 21 men who would have been eligible declined to go, a list that included Johnson, Jordan Spieth, Rory McIlroy and Jason Day.

One good week assured Bernd Wiesberger of Austria a return to the U.S. Open. He won in Denmark, moving him to No. 50 in the world and No. 3 on the special points list in Europe that replaces qualifying this year.

One big finish might have done the trick for Ian Poulter.

Poulter was at No. 66 in the world and facing a 36-hole qualifier for the U.S. Open next Monday. But then he holed a 30-foot birdie putt on the 17th hole and another birdie putt from the same range on the 18th at Colonial. That moved him into a four-way tie for third.

The final putt was worth six spots alone in the world ranking. Poulter is now at No. 56, and the top 60 after this week are exempt to Torrey Pines. Poulter is not playing the Memorial. He can only wait, though odds are in his favor he will stay in the top 60.

Also coming up big was Charley Hoffman. He closed with a 65 at Colonial to tie for third, moving him up to No. 60.

Titleist lost one of its most influential staff members last week with the death of Joe Turnesa Jr., who came from a rich history of golf in his family and was an innovator and pioneer in the field of player promotion.

He also played a role in the tradition of Titleist sales representatives wearing white coats to be more easily recognized.

Turnesa’s grandfather was a golf course superintendent for 50 years, and his seven sons followed him into the sport. Joe Turnesa Sr. was a 24-time winner on the PGA Tour. Jim Turnesa won the 1952 PGA Championship and played in the Ryder Cup. Four other sons were head pros and a seventh son, Willie, won two U.S. Amateurs, a British Amateur and was captain of the 1951 Walker Cup team.

Joe Turnesa Jr., known as “Joe T.,” went the equipment route, first with Royal golf ball before becoming part of the Titleist family in 1964. Wally Uihlein, the retired CEO of Acushnet, estimates Joe T. traveled 2 million miles servicing some of the best players in the game.

As for that white coat? The idea was to let Titleist employees stand out at tournaments so players could receive their chit for three dozen golf balls from the pro shop (Titleist doesn’t have select balls for specific players). Titleist employees still wear the white coats at special occasions, such as the PGA Merchandise Show.

Jordan Spieth's runner-up finish at Colonial was his eighth top 10 of the season, one more than he had the last two seasons combined. ... The R&A is launching a ballot for tickets to the British Open at St. Andrews next year, the 150th edition of golf's oldest championship. The ballot will go from July 1 to Oct. 4 for fans to register for tickets. The R&A says 85% of hospitality packages already have been sold. ... John Pak of Florida State led the top five players in the PGA Tour University ranking that makes them exempt to the remaining open, full-field Korn Ferry Tour events this year.

Only four of the 35 tournaments on the PGA Tour schedule this season have been won by players ranking in the top 10 in the world.

“I didn’t play well. I shot 3 over. But I won the PGA.” — Phil Mickelson after a 73 at the Colonial, four days after he won the PGA Championship.