A Canadian Cabinet minister pledged again Wednesday to support efforts to find more unmarked graves at former residential schools for Indigenous students after the remains of 215 children were located at what was once Canada’s largest such school.

The comments from Indigenous Relations Minister Carolyn Bennett come as First Nations leaders called for an examination of other former residential schools — institutions that held Indigenous children taken from families across the nation.

Chief Rosanne Casimir of the Tk’emlups te Secwepemc First Nation in British Columbia has said the remains of 215 children were confirmed last month at the school in Kamloops, British Columbia, with the help of ground-penetrating radar. So far none has been excavated. 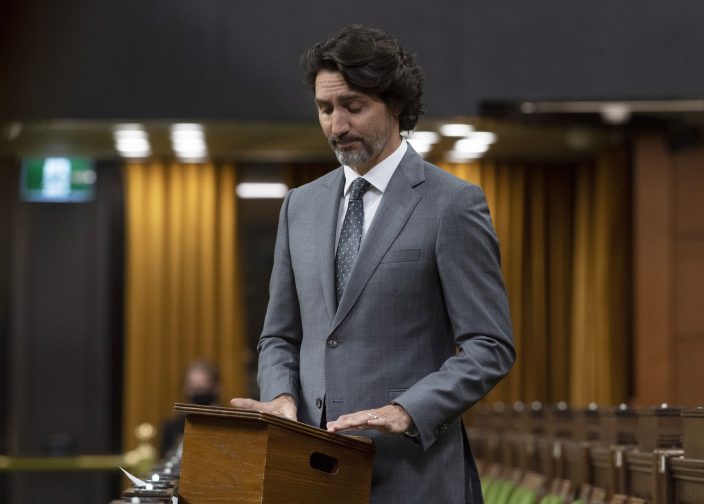 Canadian Prime Minister Justin Trudeau speaks during a debate about the discovery of remains of 215 children at the site of the Kamloops Indian Residential School, in the House of Commons, in Ottawa, Ontario, Tuesday, June 1, 2021. (Adrian WyldThe Canadian Press via AP)

Prime Minister Justin Trudeau has said the government will help preserve gravesites and search for potential unmarked burial grounds at other former residential schools. But Trudeau and his ministers have stressed need for Indigenous communities to decide for themselves how they want to proceed.

“We will be there to support every community that wants to do this work,” Bennett said.

“We know right now that that work is urgent." 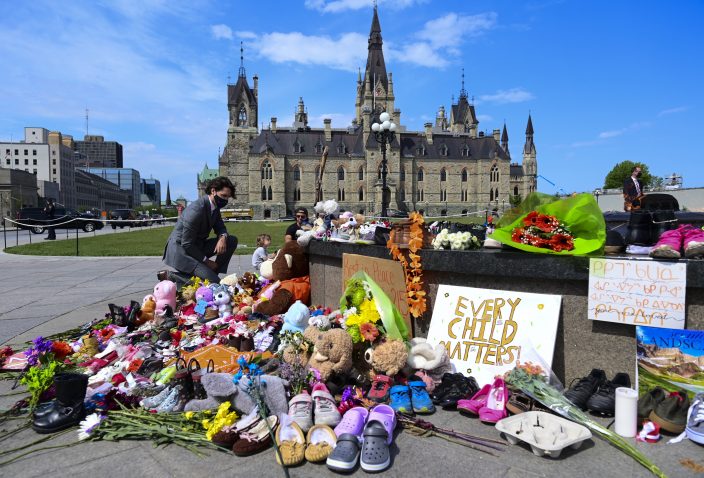 Canadian Prime Minister Justin Trudeau visits a memorial at the Eternal Flame on Parliament Hill in Ottawa on Tuesday, June 1, 2021, that's in recognition of discovery of children's remains at the site of a former residential school in Kamloops, British Columbia. (Sean KilpatrickThe Canadian Press via AP)

The government previously announced $27 million Canadian (US$22 million) for the effort. Bennett called that a first step.

"I know people are eager for answers but we do have the respect the privacy and mourning period of those communities that are collecting their thoughts and putting together protocols on how to honor these children,” Indigenous Services Minister Marc Miller said.

A National Truth and Reconciliation Commission, which was set up as part of a government apology and settlement over the schools, issued a report in 2015 that called on the government to work with Indigenous community leaders and respond to families’ wishes for commemoration ceremonies, markers and reburials in home communities.

From the 19th century until the 1970s, more than 150,000 First Nations children were required to attend state-funded Christian schools as part of a program to assimilate them into Canadian society. They were forced to convert to Christianity and not allowed to speak their native languages. Many were beaten and verbally abused, and up to 6,000 are said to have died.

The Canadian government apologized in Parliament in 2008 and admitted that physical and sexual abuse in the schools was rampant. Many students recalled being beaten for speaking their languages. They also lost touch with their parents and customs.

Indigenous leaders plan to bring in forensics experts to identify and repatriate the remains of the children found buried on the Kamloops site. Perry Bellegarde, chief of the Assembly of First Nations, spoke with Trudeau this week and urged him to work with First Nations “to find all the unmarked graves of our stolen children.”

Murray Sinclair, the former chair of the reconciliation commission, said more sites will be found.

“We know there are lots of sites similar to Kamloops that are going to come to light in the future. We need to begin to prepare ourselves for that,” Sinclair said.

The reconciliation commission has records of at least 51 children dying at the school between 1915 and 1963. It identified about 3,200 confirmed deaths at schools throughout Canada, but noted the schools did not record the cause of death in almost half of them.

The commission said the practice at the time was not to send the bodies of the students who died at the schools to their communities.

The Kamloops Indian Residential School was Canada’s largest such facility and was operated by the Roman Catholic Church between 1890 and 1969 before the federal government took it over as a day school until 1978, when it was closed.

Unmarked graves found at another Indigenous school in Canada

More than 200 bodies found at Indigenous school in Canada