A quick look at the French Open:

Rafael Nadal, Roger Federer and Novak Djokovic will be heavy favorites against unseeded players Saturday as they try to advance to the second week at the French Open. Nadal will face No. 45-ranked Cameron Norrie for the third time this year and has won both previous meetings, including in straight sets at the Australian Open. Federer will take on Dominik Koepfer, and Djokovic will face Ricardas Berankis. Also seeking a spot in the round of 16 will be 18-year-old Spaniard Carlos Alcaraz, a qualifier who is the youngest man to reach the third round at the French Open since 1992. His opponent will be Jan-Lennard Struff. Two all-American matchups highlight the women's schedule. Sofia Kenin, the highest-seeded remaining player in the draw at No. 4, faces Jessica Pegula, while Jennifer Brady takes on 17-year-old Coco Gauff. 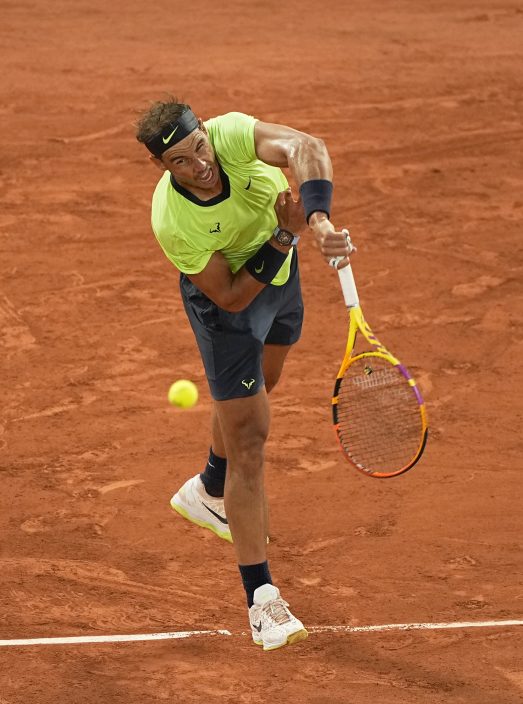 Spain's Rafael Nadal serves to Richard Gasquet of France during their second round match on day 5, of the French Open tennis tournament at Roland Garros in Paris, France, Thursday, June 3, 2021. (AP PhotoMichel Euler)

Cloudy with a chance of rain. High of 70 degrees Fahrenheit (21 Celsius).

Cloudy with some rain. High of 70 degrees Fahrenheit (21 Celsius).

16 minutes — the length of the final game in Alejandro Davidovich Fokina's upset win over Casper Ruud, which lasted 4 hours, 35 minutes. In the last game, Davidovich Fokina hit an underhand serve to help save a break point.

"It’s an interesting position to be in. I’ve been in that position too, where I've played people that I really admired, but at the same time I wanted to win the match. So the tables have turned. They want to win, and they have nothing to lose. They start hitting lines, and you have to just realize you can hit the lines too.” — Serena Williams on opponents who idolize her.