UNITED NATIONS -- The United Nations chief is welcoming the Biden administration’s announcement that it will be donating millions of doses of COVID-19 vaccine to the U.N.-backed COVAX facility as well as to individual countries and U.N. front-line personnel in challenging and dangerous locations.

U.N. spokesman Stephane Dujarric says Secretary-General Antonio Guterres is also “extremely grateful” to the U.S. government for including U.N. personnel and diplomats and staff of the 193 U.N. member nations in the U.S. vaccination program.

Biden announced Thursday the U.S. will swiftly donate an initial allotment of 25 million doses of surplus vaccine overseas through the COVAX program, which to date has shared just 76 million doses with needy countries. Overall, the White House has announced plans to share 80 million doses globally by the end of June, most through COVAX. 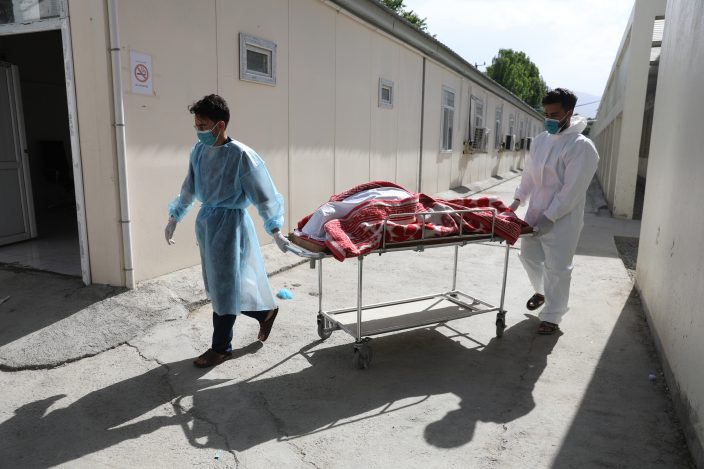 Afghan health workers carry the body of a woman who died from COVID-19 at the Afghan-Japan Communicable Disease Hospital in Kabul, Afghanistan, Sunday, May 30, 2021. Afghanistan is battling a brutal third wave of COVID infections, while health officials plead for vaccines, expressing deep frustration at the inequities of the global vaccine distribution. Positive COVID cases jump from eight percent to 60 per cent in some parts of the country. (AP PhotoRahmat Gul)

Dujarric said the donation to U.N. frontline personnel will allow staff members “to stay and deliver critical services to vulnerable people around the world in a safe and effective manner.”

Guterres renews his call for countries to share vaccines, particularly with countries struggling with new surges and variants, Dujarric said.

“There is an urgent need for increased global solidarity to ensure that vaccines are available to everyone, everywhere,” he said. 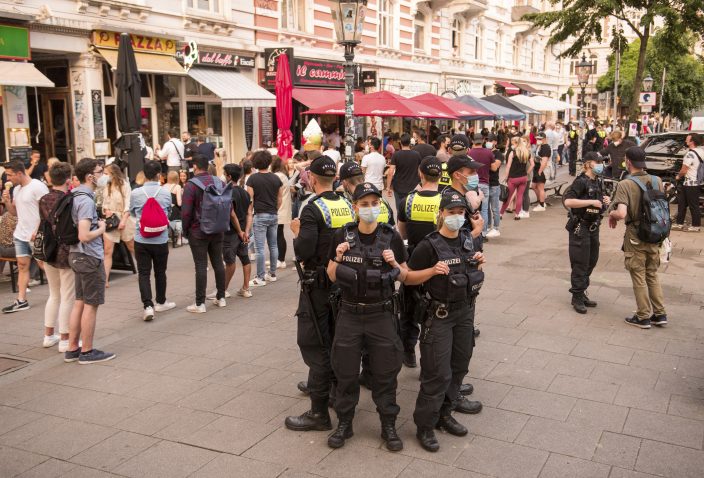 Police officers stand in the evening in the Schanzenviertel on the street "Schulterblatt" and control the coronavirus rules, in Hamburg, Germany, Friday, June 4, 2021. In the Schanzenviertel, alcohol may no longer be served outside on the weekend. (Daniel Bockwoldtdpa via AP)

MORE ON THE VIRUS OUTBREAK:

— US businesses struggle to fill jobs even as hiring picks up 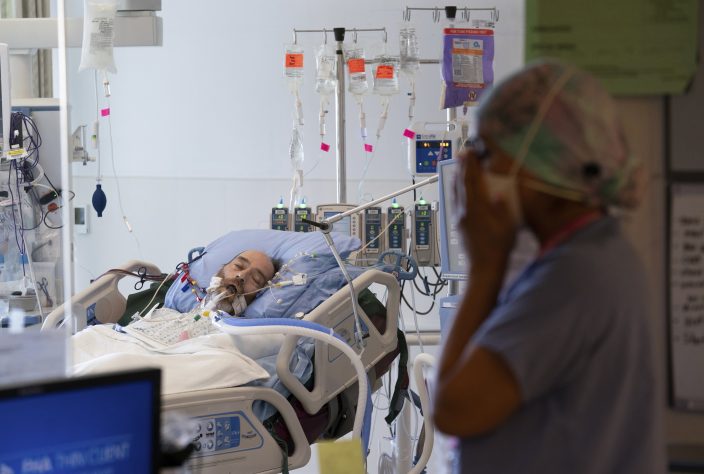 — France is putting itself back on the menu as a destination for international tourists who have had coronavirus jabs.

— A flight carrying 1.24 million doses of AstraZeneca coronavirus vaccine from Japan has touched down in Taiwan to help the island fight its largest outbreak since the pandemic began. 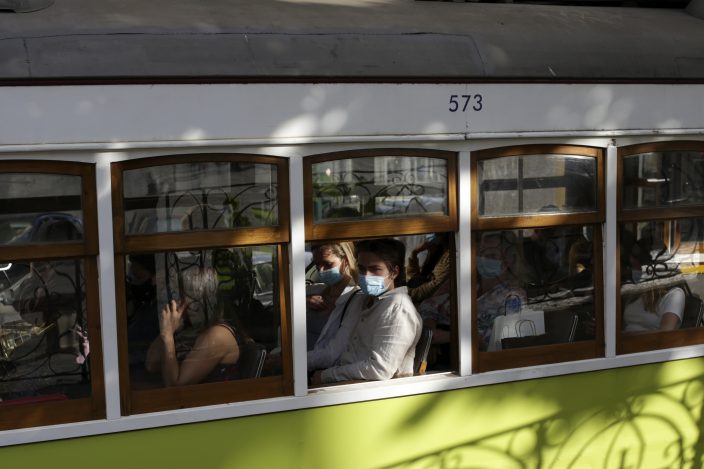 People wearing face masks ride a tram in Lisbon, Friday, June 4, 2021. Britain said Thursday that it is removing Portugal from its list of COVID-safe travel destinations, meaning thousands of U.K. residents currently on vacation there face the prospect of 10 days' quarantine on return. (AP PhotoArmando Franca)

MEXICO CITY -- Mexican officials said Friday they will use 1 million U.S. doses of the Johnson & Johnson coronavirus vaccine to inoculate people along the border.

President Andrés Manuel López Obrador says the vaccinations along Mexico’s northern border with the United States is part of an effort to fully reopen border crossings, which are currently restricted to essential travel. 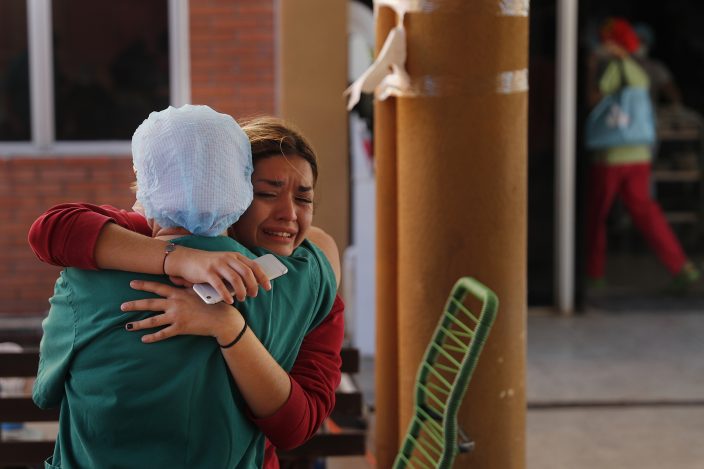 Laura Aguero, the niece of 38-year-old lawyer Arturo Benitez who spent 25 days in the ICU for COVID-19 at Clinicas Hospital, embraces a nurse after learning he died, in San Lorenzo, Paraguay, Friday, June 4, 2021. Aguero said the family spent almost $15,000 dollars on medication for him that was not provided by the hospital. (AP PhotoJorge Saenz)

“There is going to be a special vaccination plan in the border communities of our country on the northern border, with the aim of getting border transportation back to normal,” López Obrador said.

Mexican officials say they will have to obtain another 2 million doses of the one-shot vaccine — which they might purchase from Johnson & Johnson — to vaccinate 3 million border residents between 18 and 40 years old.

Presumably, those older than 40 will be covered by Mexico’s regular nationwide campaign, which does not use Johnson & Johnson, although the shot has been approved for use in Mexico. 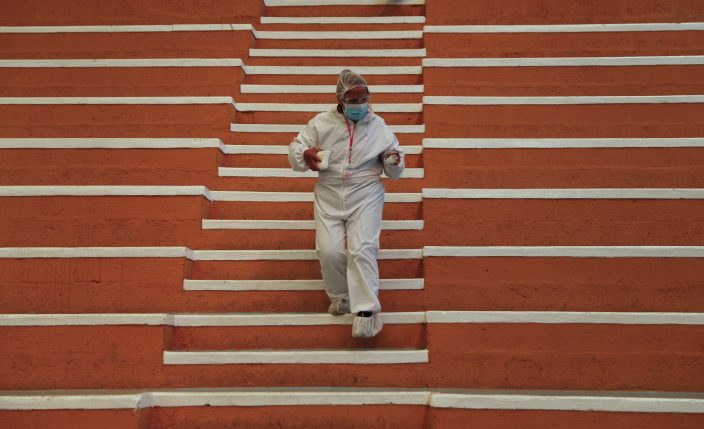 A nurse approaches people to give them a shot of Sinopharm COVID-19 vaccines inside the gym of the American Institute school, as people over age 40 are eligible to get vaccinated in La Paz, Bolivia, Friday, June 4, 2021. (AP PhotoJuan Karita)

On Thursday, an official said some doses might also be used at coastal resorts frequented by Americans, but that possibility was not included in the plan announced Friday.

The announcement came on the same day that Mexico City announced the gradual lifting of a partial coronavirus lockdown that began more than a year ago.

SACRAMENTO, Calif. -- California Gov. Gavin Newsom says he will not lift the coronavirus state of emergency on June 15.

Newsom has said he will lift most of the virus restrictions on that date. But Friday, Newsom said he will not lift the state of emergency that gives him broad authority to issue alter or suspend state laws and regulations.

California has been under a state of emergency since March 4, 2020. Since then, according to a resolution authored by Republican state senators, Newsom has authorized billions of dollars in emergency spending and issued at least 47 executive orders to alter or suspend 200 state laws and regulations because of the virus.

Newsom, a Democrat, said he won’t end the state of emergency because the virus “is not taking the summer months off.”

Republicans in the state Senate have tried repeatedly to pass a concurrent resolution to end the state of emergency. But Democrats in the majority have always blocked their efforts.

TOPEKA, Kan. — The state health department says Kansas ordered less than 1% of its vaccine allocation from the federal government for this week.

The disclosure Friday comes as the department’s data showed that Kansas still had nearly 593,000 unused doses as of Friday, about 21% of the 2.8 million shipped to the state.

Demand for inoculations has dropped, prompting the state and county health departments to increase mobile clinics and bring vaccines to churches and work sites.

Data shows that an average of 4,348 vaccine shots a day were administered during the seven days ending Friday. That was its lowest reported seven-day average since Jan. 21.

The department said 42.5% of the state’s 2.9 million residents had received at least one vaccine shot as of Friday.

Meanwhile, Kansas was trying to boost vaccinations with a two-day event promoting inoculations at a NASCAR track in Kansas City.

The state, Wyandotte County and the University of Kansas Health System partnered with Kansas Speedway on the event. The speedway offered people who got vaccinated two laps around its track and entered them in a raffle for prizes that included tickets to the NASCAR Cup Series race there in October.

DENVER -- Colorado has picked its first $1 million winner in a lottery that’s trying to inspire residents to get vaccinated against the coronavirus.

Gov. Jared Polis on Friday announced that Sally Sliger of Mead won the first of five $1 million prizes for residents who have received the COVID-19 vaccine.

Every resident who was vaccinated by the end of May was entered in the first drawing. Residents needed to be 18 years old and have received at least one dose of the approved coronavirus vaccines to be eligible.

Colorado is one of several states offering lottery prizes, scholarships and other incentives to drive vaccination rates up.

SACRAMENTO, Calif. -- California Gov. Gavin Newsom took a turn as gameshow host as the state drew the first 15 winners of $50,000 prizes for getting vaccinated against the coronavirus.

Newsom and two others drew the winners from a lottery machine Friday.

It’s the first in a series of drawings, culminating in 10 grand prizes of $1.5 million each on June 15. That’s the day when the state expects to drop almost all coronavirus related restrictions on businesses and gatherings.

The winners will remain anonymous unless they give the state permission to share their names, and they have 96 hours to claim their prizes before the state draws alternate winners. The state will contact winners.

BELGRADE, Serbia — Serbia and Russia have formally inaugurated the launch of production of Russia’s Sputnik V vaccine in the Balkan country.

A symbolic ceremony on Friday saw the head of Serbia’s Torlak Institute in Belgrade, Vera Stoiljković, press the production button as presidents of the two countries attended by video conference.

The report says Serbia has become the first country in Europe to produce the Russian vaccines. It says Serbia-made Sputnik V vaccines could be in use within 10 days.

The Russian vaccines have not been approved by the European Medical Agency. Slovakia and Hungary have been the only European Union countries using the vaccines.

Health authorities recently dropped most coronavirus restrictions after the numbers of new cases and hospitalizations started to drop.