gTony La Russa moved past John McGraw into sole possession of second on baseball’s career manager wins list, directing the Chicago White Sox to a 3-0 victory over the Detroit Tigers on Sunday.

It was win No. 2,764 for La Russa, who was hired by Chicago in October for his first managerial job since he led St. Louis to the World Series championship in 2011. It has been a bit of a bumpy ride so far, but the 76-year-old Hall of Famer has the White Sox on top of the AL Central.

Second on the list is almost assuredly the highest finish for La Russa, who also began his managerial career with the White Sox in 1979. The top spot belongs to Connie Mack with 3,731 victories. 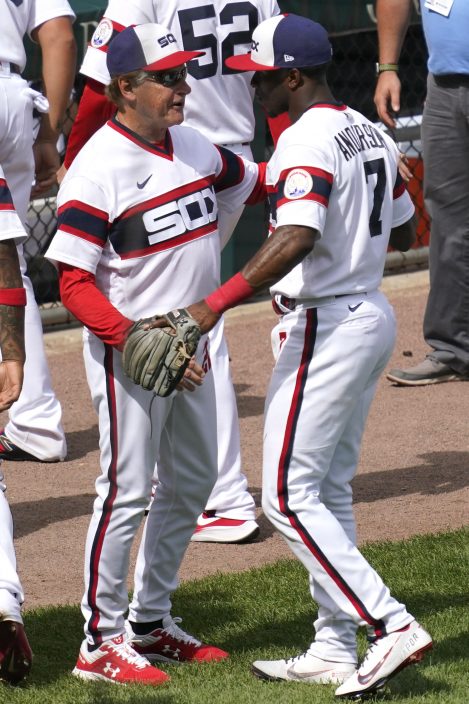 La Russa watched as Chicago won for the 10th time in 14 games. Dylan Cease (4-2) struck out 10 in seven sparkling innings, Liam Hendriks worked the ninth for his 15th save and Tim Anderson had two hits and two RBIs.

Stadium workers using tractors scrambled to hoist the protective netting behind home plate after it suddenly collapsed while Trea Turner was batting in the eighth inning. No one appeared to be hurt in the mishap, which caused a 20-minute delay.

Washington pitcher Austin Voth suffered a broken nose when he was hit trying to bunt and plate umpire Brian O’Nora was forced to leave after being struck in the mask by a foul tip. He was replaced by crew chief Fieldin Culbreth, resulting in a nine-minute delay.

Daniel Robertson homered in the fifth off Caleb Smith (2-2) and Tyrone Taylor in the sixth against Riley Smith as the Brewers completed a four-game sweep for their four-game home winning streak since Sept. 19-22, 2019.

Brad Boxberger got his second save, and the Brewers won fir the ninth time in 10 games.

Arizona has lost 28 of 33 overall. The Diamondbacks haven’t won a road game since Madison Bumgarner threw seven no-hit innings on April 25 to finish a doubleheader sweep in Atlanta.

Yimi Garcia pitched a perfect ninth inning for his 10th save.

Cedric Mullins hit a leadoff homer as part of a three-hit day, and Baltimore scored its most runs since beating beating Oakland 18-2 on Aug. 16, 2015. The Orioles had 21 hits.

Mullins reached base in his first five plate appearances before his flyout in the eighth ended his on-base streak at 11. He had hits in nine consecutive at-bats in that span.

After losing their final 14 games in May, the Orioles are 4-1 in June,

Max Fried outpitched Trevor Bauer, and Atlanta took two of three in the first meeting of the teams since Los Angeles rallied from a 3-1 deficit to win last year’s NL Championship Series.

Albert Pujols hit his 671st home run and had two hits and two RBIs for the Dodgers. He homered leading off the ninth against closer Will Smith, who regrouped to get his 11th save in 11 chances.

Ryan Pressly worked the ninth for his ninth save.

Toronto went 3-2 in its first homestand at the home of its Triple-A affiliate. The Blue Jays, forced from home by Canadian coronavirus travel restrictions, were 10-11 at its spring training site in Dunedin, Florida, to begin the season.

With Jarrod Dyson on second and Cam Gallagher on first, Nicky Lopez bunted to the right side. Sanó charged in to make the catch and threw to shortstop Andrelton Simmons to double off Dyson.

Simmons then trotted toward Gallagher and tossed to second baseman Nick Gordon, who was covering first, to complete the Twins’ first triple play since 2019. The previous time Kansas City hit into a triple play was 2012

Sanó hit an RBI double in the third off Brady Singer (3-5). Luke Ferrell (1-0) won in relief, and Taylor Rogers got his fifth save.

Jesse Winker hit a tiebreaking home run off Alex Reyes (3-2) in the ninth for his second three-homer game this season, and Cincinnati completed its first four-game sweep of St. Louis since May 4-7, 1990.

Winker had six RBIs and Eugenio Suárez added a two-run double for the Reds, who led 7-0 by the third inning.

Heath Hembree (1-1) struck out two in a perfect eighth inning, and Lucas Sims got his sixth save when he struck out José Rondón with runners at second and third.

Germán Márquez (4-5) allowed one run and four hits in six innings, and Colorado avoided a three-game sweep. Daniel Bard pitched two innings for his seventh save.

Raimel Tapia provided the early offense with a two-out RBI single in the third off James Kaprielian (2-1) and Brendan Rodgers brought in another on a sacrifice fly in the fourth. Dom Nuñez added an insurance run in the eighth on a sac fly.

Rookie Taylor Walls had a tiebreaking, two-run double in the eighth off Josh Sborz, his season-high third hit, after Tampa Bay loaded the bases with no outs against John King (5-4).

The AL-leading Rays trailed 1-0 before scoring three runs in the eighth and four in the ninth to get the series victory in their return to the stadium that hosted their neutral-site World Series loss to the Los Angeles Dodgers last fall.

Patrick Wisdom hit a pair of home runs and drove in three runs in helping Chicago avoid a four-game sweep. Wisdom has seven home runs in 13 games this season.

Kyle Hendricks (7-4) won his fifth straight start, allowing three runs and seven hits in 6 1/3 innings. Craig Kimbrel struck out two in a perfect ninth for his 14th save.

Marcus Stroman won his second straight decision after four consecutive losses and doubled in a run as New York gained a four-game split.

Stroman (5-4) gave up an unearned run and four hits in 6 2/3 innings with seven strikeouts and four walks, his most since Sept. 12, 2019. Miguel Castro and Trevor May finished a six-hitter.

Chris Paddack (2-5) dropped to 1-4 in his last seven starts, giving up three runs and six hits in six innings.

Donovan Walton hit the go-ahead home run in the third inning. and Logan Gilbert (1-2) struck out seven and allowed two hits in five innings for his first major league win.

On a day when Patrick Sandoval (0-2) induced 32 swings and misses, the most of any big league pitcher this year, Walton led off the third by lining a fastball down the right-field line for a 2-1 lead.

Sandoval (0-2) had a career-high 10 strikeouts and retired his last 11 batters.