Louis Oosthuizen could easily be portrayed as his generation’s Byron Nelson, and not just because of his syrupy swing.

Nelson retired from a full schedule when he was 34 (with 51 wins and five majors) to become a rancher. Oosthuizen, a 38-year-old South Africa, is taking a step in that direction.

He bought an 86-acre ranch in Ocala, Florida, and is moving this week from Palm Beach Gardens. He said his family will live in a rental property on Golden Ocala, the course that hosted an LPGA Tour event this year, and move into the farmhouse next spring. 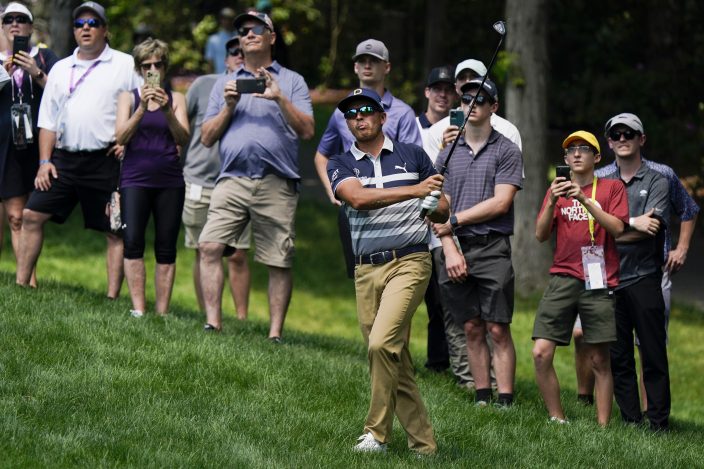 Rickie Fowler hits to the ninth green during the third round of the Memorial golf tournament, Saturday, June 5, 2021, in Dublin, Ohio. (AP PhotoDarron Cummings)

It came together quickly. Oosthuizen and his wife, Nel-Mare, were visiting friends on the range the day after Christmas and fell in love with the oak trees and everything else about it. Imagine his surprise when his friend said it was on the market because he had bought a bigger ranch.

“My wife was looking at me and said, ‘We cannot lose this piece of property,’” Oosthuizen said. They made an offer and bought it a week later. 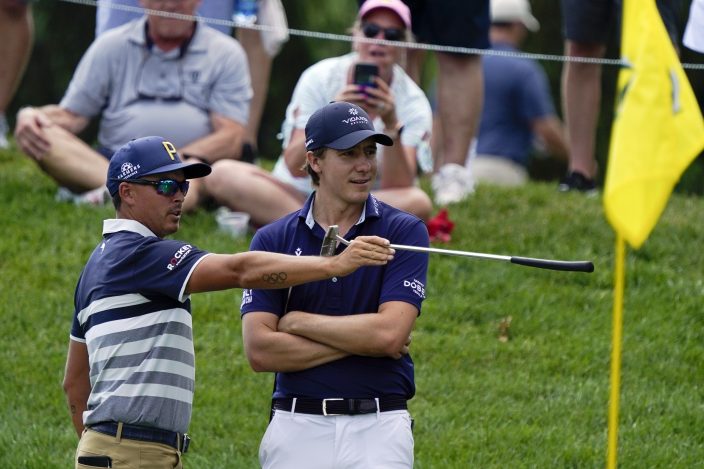 Rickie Fowler, left, talks with Carlos Ortiz, of Mexico, on the 10th green during the third round of the Memorial golf tournament, Saturday, June 5, 2021, in Dublin, Ohio. (AP PhotoDarron Cummings)

Oosthuizen grew up on the farm near Mossel Bay in South Africa and he still has a 150-acre ranch where he mostly grows hay for his brother, who has a dairy farm on about 1,500 acres next to him. Farming has been his passion as long as he can remember, though he happens to be pretty good at golf, too.

Ocala, renowned for its horse farms, is about 100 miles north of Tampa.

Oosthuizen plans to get horses and “I’ll probably have a few cattle just to keep me busy. It will be nice to have the open fields.” 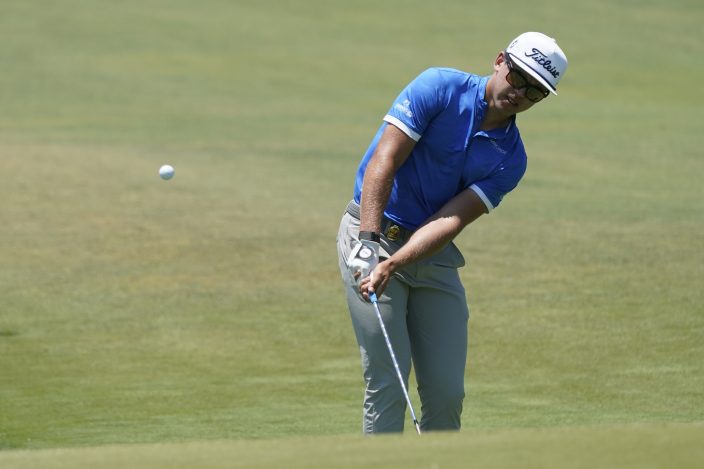 Garrick Higgo, of South Africa, chips up to the first green during the second round of the PGA Championship golf tournament on the Ocean Course Friday, May 21, 2021, in Kiawah Island, S.C. (AP PhotoMatt York)

He isn’t quite ready to retire, though.

Oosthuizen won the 2010 British Open at St. Andrews and has been runner-up in all four majors, including the PGA Championship last month at Kiawah Island. He is No. 18 in the world.

“Honestly, I thought this time in my career I’d probable be more wanting to farm,” he said. “But I sort of got that second push in the game. I really feel like I can still win a major. It’s keeping me up there and focused to work a little more. I’m getting closer. When it’s time and I feel I can’t compete, I’ll hang it up and enjoy life.”

It sounds as though he already is.

It has become far too common for players who walk off the course at 36-hole U.S. Open qualifying when it's clear they are not going to make it. One argument is they should finish what they started. Another is that they are getting out of the way of those who have a chance and allowing the long day to move a little quicker.

Far more noteworthy was Tuesday's conclusion of the rain-delayed sectional at The Lakes.

There was a five-man playoff for four spots in the Ohio qualifier. Cole Hammer was the odd man out and became first alternate from the site. There also was a 12-man playoff for one player to be second alternate, even though that player had virtually no chance of getting in the U.S. Open.

Former PGA champions Jason Dufner and Keegan Bradley finished Monday night and returned Tuesday morning to see if they still had a chance at those 16 U.S. Open spots (they didn't). Rickie Fowler and three-time major champion Padraig Harrington also missed by one.

They were among 10 players who stayed to play in what essentially was a meaningless playoff to be second alternate. It was won by Ben Taylor, who holed out for eagle on the second hole.

ENGLISH AS A THIRD LANGUAGE

Carlos Ortiz of Mexico is proficient in English, having played at North Texas and going from the Korn Ferry Tour to the PGA Tour to winning the Houston Open last year.

English isn't even his second language.

Ortiz, who grew up in Guadalajara, went to boarding school to Germany. He was speaking flawless German as a teenager, though that's not the case now. Could he carry a conversation with Martin Kaymer or Bernhard Langer?

“I don't know. I probably could,” Ortiz said. “I don't speak it anymore. I haven't spoken Germany in 14 years. But when I was in Germany, I dreamed and thought everything in Germany. I think I've lost it now.”

Ortiz said there was one Christmas when he came home to Mexico and his mother was asking what he wanted for Christmas. The MP3 player was on his mind. So was his second language.

She didn't understand, so he said it with emphasis without realizing what he was saying: "MP Drei!"

“I didn't know it any different,” Ortiz said. “My mom is like, ‘What is this guy talking about?’”

He didn't say whether he got the MP3, unless he called it the MP Tres.

Matthew Southgate needed a birdie on the par-5 18th to force a playoff in the Porsche European Open. But he drove into the water, made bogey and wound up in a four-way tie for second.

The result put him 11th on a special three-tournament points list for the European Tour that offered 10 spots to the U.S. Open for players not already exempt. The list was used because there was no 36-hole qualifier in England due to the pandemic.

But a decision by the USGA worked in Southgate's favor.

Bernd Wiesberger was in the top 10 on that points list. He also was No. 52 in the world ranking, and the top 60 were exempt after last week's tournaments.

Even though the tournament ended before the latest ranking was published, the USGA first went down the ranking list. Wiesberger was already exempt through the ranking, so Southgate got the 10th and final spot.

The USGA used the ranking first because it was announced as an exemption category ahead of the European points category.

The final ranking category was moved up one week to accommodate any travel restrictions as a result of the pandemic.

Playing in his first major wasn’t the only new experience for Garrick Higgo in the PGA Championship. It also was the first time he competed before fans.

The 22-year-old South African played two dozen tournaments before the COVID-19 pandemic, mostly on the Sunshine Tour and a few Challenge Tour events. Fans were allowed, but not many showed up.

“Pretty much me, my caddie and maybe my mother,” Higgo said. “This was my first time playing before a crowd. This was so much more fun — definitely 10,000 times more fun.”

That was a reference to the PGA of America setting a limit at 10,000 spectators a day, although most would agree it felt and looked like twice that many.

“I think I handled it well,” he said. “Even when you’re playing badly, you just really enjoy being out there.”

Higgo, who has won six times on various tours in his three years, tied for 64th at Kiawah Island, making eight birdies in his closing round of 69. He gets another crack at a major in the U.S. Open next week at Torrey Pines.

But first, he received a foreign exemption to the Palmetto Championship at Congaree this week in South Carolina. Crowds won’t be as big as they were at Kiawah — but still more than what he was used to.

Ben Crenshaw has been selected as the 79th person to be the Memorial honoree, following Nick Price. The two-time Masters champion will be honored next year during the Memorial at Muirfield Village. ... Patrick Reed finished fifth at the Memorial and crossed the $35 million mark in career earnings on the PGA Tour. ... The British Open is offering additional qualifying spots at the Irish Open and two Challenge Tour events. That's to accommodate players who might have signed up for final qualifying in the U.K. and can eliminate travel issues associated with the pandemic.

Brian Stuard has earned a spot in the U.S. Open from the Springfield, Ohio, qualifier each of the last four times, and six of the last eight times.

“I don't know if 10 out of 10 does it justice.” — Wilson Furr, who went from an alternate out of local qualifying to earning a spot in his first U.S. Open.