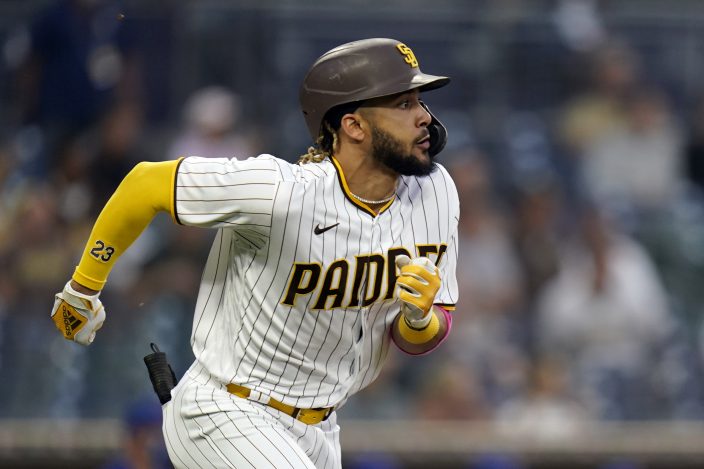 San Diego Padres' Fernando Tatis Jr. runs to first as he lines out during the second inning of the team's baseball game against the Chicago Cubs, Tuesday, June 8, 2021, in San Diego. (AP PhotoGregory Bull)

Exasperated by a run of brutal baseball, the Arizona Diamondbacks shook up their coaching staff in an effort to stabilize their season. D-backs manager Torey Lovullo fired hitting coach Darnell Coles and assistant hitting coach Eric Hinske on Thursday with the team struggling to score runs and mired in a 5-30 stretch dating back to May 4. 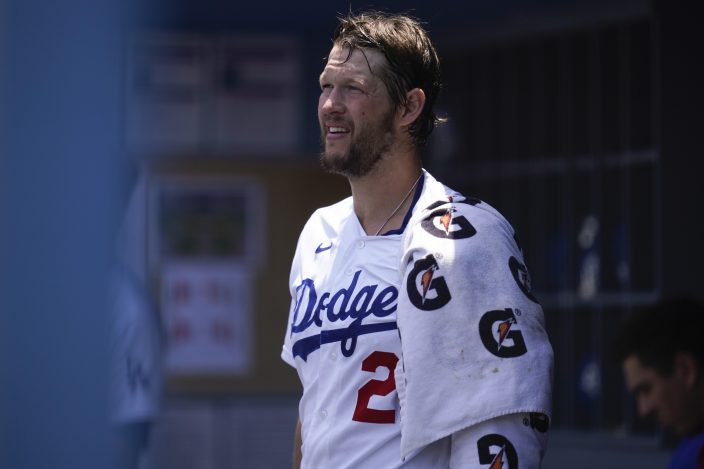 Los Angeles Dodgers starting pitcher Clayton Kershaw (22) ices his left arm in the dugout in the bottom of the first inning of a baseball game against the San Francisco Giants Sunday, May 30, 2021, in Los Angeles. (AP PhotoAshley Landis)

Dodgers left-hander Clayton Kershaw (7-5, 3.66), a Dallas native, will pitch against his hometown team for the second time: He allowed four runs over six innings in a 5-3 loss at Dodger Stadium on June 17, 2015. He won World Series Games 1 and 5 on the Rangers’ field against Tampa Bay in last year’s neutral site championship. Kershaw has lost consecutive starts going into his outing against the visiting Texas Rangers and RHP Mike Foltynewicz (1-6, 4.75), who is 0-3 in six starts since beating the Los Angeles Angels on April 27.

Nationals right-hander Max Scherzer is 5-4 with a 2.22 ERA going into a rain-delayed outing against the Washington Nationals. Scherzer is 4-5 with a 3.86 ERA in 10 starts against the Giants.

Right-hander Aaron Civale (8-2, 3.49) has won three of his last four starts going into his start for the Cleveland Indians against the visiting Seattle Mariners and right-hander Justin Dunn (1-2, 3.18).