Fear of crime is back as a political issue in New York City. For the first time in years it could be a prime factor in who voters pick as their next mayor.

Early voting begins Saturday in the city's party primaries. Ballots are being cast as the city is emerging, brimming with hope, after a year in pandemic lockdown, but also amid an unsettling rise in shootings.

The violence is still well short of the historic highs of the 1990s, or even in the New York of the early 2000s. But it has forced the leading Democratic candidates to balance talk of police reform with promises not to let New York backslide to its long-gone days as a crime capitol. 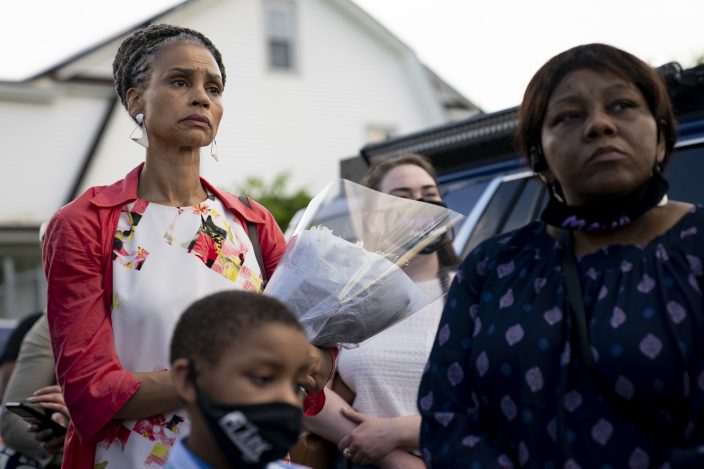 New York City mayoral candidate Maya Wiley attends a vigil at the scene where 10-year old Justin Wallace was shot and killed the previous Saturday night in the Rockaway section of the Queens borough of New York, Wednesday, June 9, 2021. The Democratic primary race for New York City mayor is nearing the finish line with a surge in shootings pushing public safety to the top of some voters' concerns.(AP PhotoJohn Minchillo)

“No one is coming to New York, in our multibillion-dollar tourism industry, if you have 3-year-old children shot in Times Square,” Brooklyn Borough President Eric Adams said at a recent debate, referring to a May 8 shooting in which a 4-year-old girl and two adult women were wounded by stray bullets.

Adams, a former police captain who also co-founded a leadership group for Black officers, has risen to the top of most polls as issues of crime and policing have dominated recent mayoral debates. 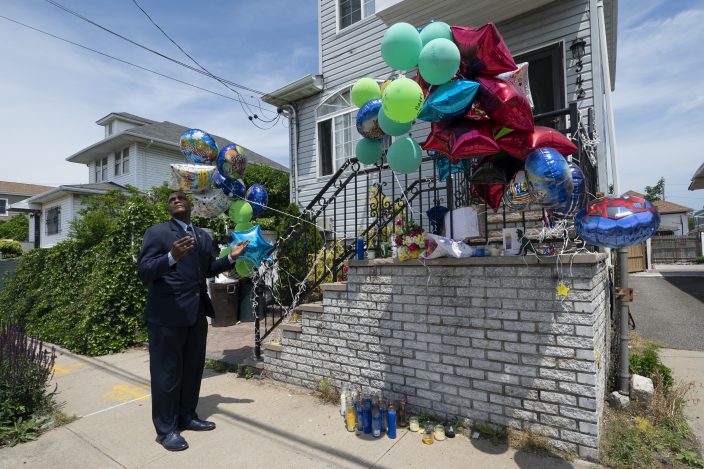 Minister Isaac Mickens says a prayer at a memorial for ten-year-old Justin Wallace, Tuesday, June 8, 2021 in the Far Rockaway neighborhood of New York. The boy was killed and his 29-year-old uncle was wounded by a gunman at a family barbecue, Saturday, June 5. The Democratic primary race for New York City mayor is nearing the finish line with a surge in shootings pushing public safety to the top of some voters' concerns. (AP PhotoMark Lennihan)

The final day of voting is June 22, with the top Democrat in overwhelmingly Democratic New York City highly likely to win the November general election and succeed the term-limited Mayor Bill de Blasio.

The Times Square shooting and other high-profile crimes like last weekend's fatal shooting of a 10-year-old boy in Queens have sparked fears of a city under siege. “Stop the Bloodshed,” screamed a recent front page of the New York Post, which warned of surrendering streets “to homelessness, filth, crime and guns” in an editorial endorsing Adams. 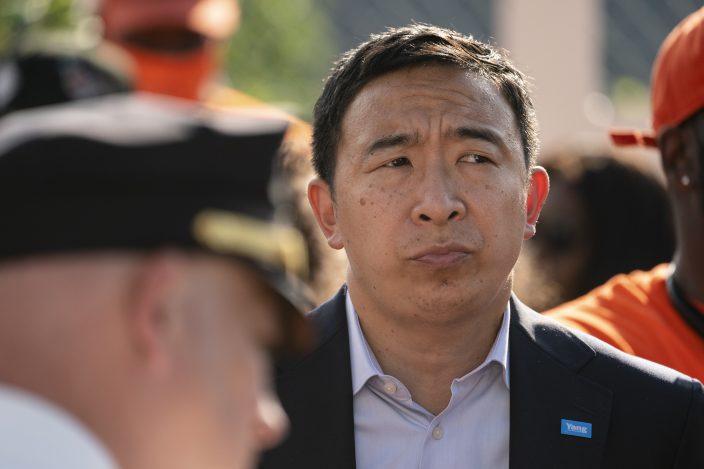 New York City mayoral candidate Andrew Yang attends a vigil at the scene where 10-year old Justin Wallace was shot and killed the previous Saturday night in the Rockaway section of the Queens borough of New York, Wednesday, June 9, 2021. The Democratic primary race for New York City mayor is nearing the finish line with a surge in shootings pushing public safety to the top of some voters' concerns. (AP PhotoJohn Minchillo)

The reality is more nuanced.

Many of the most common types of crime in the city, including robberies, burglaries and grand larcenies, remain near historic lows. Through the first five months of 2021, the total number of major crimes measured by the police department has been at its lowest level since comparable statistics became available in the 1990s.

But since the spring of 2020 the number of shootings has soared. 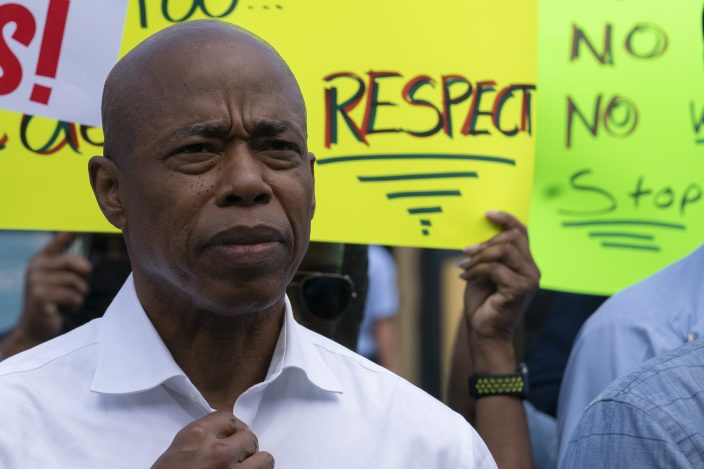 Eric Adams, Brooklyn Borough President and a Democratic mayoral candidate, attends a rally of workers from TWU Local 100 at Brooklyn's Fillmore Bus Depot about the rise in assaults against transit workers, Thursday, June 10, 2021, in New York. Adams, a former police officer, has seen his standing rise amid concern over a spike in shootings during the coronavirus pandemic. (AP PhotoMark Lennihan)

At least 687 people were wounded or killed by gunfire through June 6. That's not historically bad. More than 2,400 people were shot during the same period in 1993. But it is the highest number for a winter and early spring since 2000.

A plurality of voters surveyed in a Spectrum News NY1/Ipsos poll released this week chose “crime or violence” as the biggest problem facing New York, with both racial injustice and police reform also in the top 10. 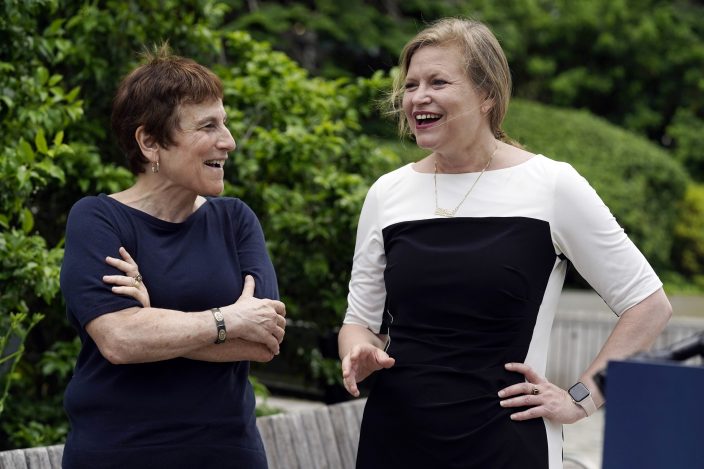 The Rev. Al Sharpton, who has known most of the Democratic mayoral candidates for years, said crime is a big issue in Black communities and the progressive candidates should address it more forthrightly.

“You know, two weeks after I did the eulogy at George Floyd’s funeral I did the eulogy for a 1-year-old kid in Brooklyn killed by a stray bullet in a gang fight,” Sharpton said, referring to Davell Gardner, shot while sitting in his stroller last summer. “So it is not true that those of us that want police reform do not also at the same time want to deal with crime. And I think that the progressive candidates need to be more out on that.”

Maria Forbes, president of the Clay Avenue Tenants’ Association in the Bronx, said crime has risen in her neighborhood during the pandemic and she has taken taxis in order to avoid the subway.

“I do not feel safe getting on the train,” Forbes said.

But Forbes, like a lot of New Yorkers, also doesn't single out crime or any one issue as the most pressing. Housing and education are also big issues, she said.

“You have minimum wage people who need housing and there’s six of them in a two-bedroom," Forbes said.

The candidates differ widely in their approaches to crime.

Wiley, who is competing with Stringer and former nonprofit executive Dianne Morales for the votes of the most liberal of New Yorkers, would cut the police budget by $1 billion annually “and invest those funds directly into the communities most impacted by gun violence,” according to her platform.

A Wiley campaign ad shows police driving into a crowd of Black Lives Matter protesters last year. She says in the ad that it's “time the NYPD sees us as people who deserve to breathe,” a reference to the deaths of Eric Garner and George Floyd.

Stringer says he would cut at least $1 billion over four years through measures such as transferring mental health response to non-police crisis teams and reducing police overtime.

Garcia has not called for cutting the police budget, but says officers' minimum age should be increased from 21 to 25 and new recruits should be required to live in the city.

Yang backs a police residency requirement as well as beefed up oversight of the department, but rejects calls to defund the police.

"The truth is that New York City cannot afford to defund the police,” he warned.

Adams, who spent 22 years in the New York Police Department, says he was victimized by police brutality as a teenager and joined the force to reform it from within.

A group Adams founded called 100 Blacks in Law Enforcement Who Care advocated against racial profiling and for recruitment of more officers of color.

While New York City mayoral races are often unpredictable, this primary is especially hard to predict because it will be the first to use ranked choice voting, with voters ranking up to five candidates.

Turnout, usually low in mayoral primaries, will also be a factor.

“The question is which issues are going to be the most important to the voters that turn up on primary day,” said Susan Kang, a political scientist at the John Jay College of Criminal Justice.

Kang said crime isn’t the main issue she hears about knocking on doors for a City Council candidate she’s supporting in Queens.

“People talk to me about all kinds of things like property tax issues, street parking, public transportation,” Kang said. “No one says to me, ‘but what is this person going to do about crime?’”