Like her Nina character in “In The Heights,” Leslie Grace says she's struggled to fit in as an Afro-Latino woman and artist.

“All the time,” the 26-year-old singer said in an interview with The Associated Press. "In so many parts of my life I’ve felt that — not being Latina enough, not being American enough, being first-generation the same way that Nina is. So a lot of the themes in Nina’s character I really related to.”

The just-released “In the Heights” is an adaptation of the Tony-award winning musical by Lin-Manuel Miranda and Quiara Alegría Hudes about the dreams and struggles of the Latino community in New York City’s Washington Heights neighborhood. 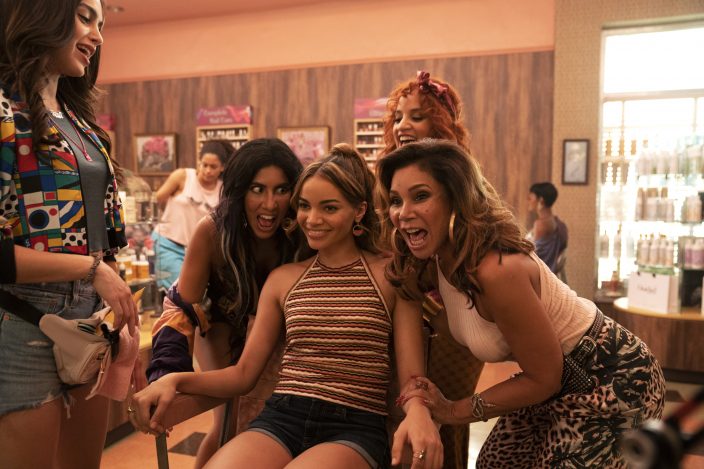 Grace, a Latin Grammy-nominated singer who started her professional career at 16, was born in the Bronx borough of New York City to Dominican parents but grew up in Davie, Florida. Last year, she left the family home to move to Los Angeles — the same way that Nina left her dad in their beloved Washington Heights to attend Stanford University, where she doesn't feel that she belongs.

Grace talked about making her acting debut in the biggest Latino movie in recent history, her experience working alongside Jimmy Smits (her onscreen dad) and the full-circle moment the film represents to her family.

Answers have been edited for brevity and clarity. 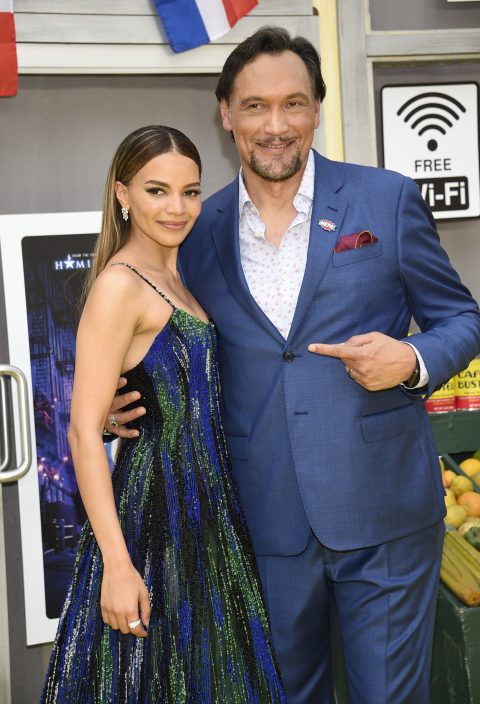 Actors Leslie Grace, left, and Jimmy Smits pose at the 2021 Tribeca Film Festival opening night premiere of "In the Heights" at the United Palace theater on Wednesday, June 9, 2021, in New York. (Photo by Evan AgostiniInvisionAP)

AP: You're not just making your acting debut in any movie, but in the biggest possible Latino release. How are you feeling now that it is finally opening?

Grace: I just feel so blessed. I feel fulfilled to be a part of something that not only is so beautiful and so big and was so incredibly challenging and fun to make, but that also gives back and pays homage to the stories of my mother and my grandmother and my family, my dad, you know, the people that I really know that have brought me up and that have supported me in so many ways. It’s a full-circle experience for all of us for so many reasons, but for me it’s really close to home because of the story.

AP: How did you get the role of Nina? 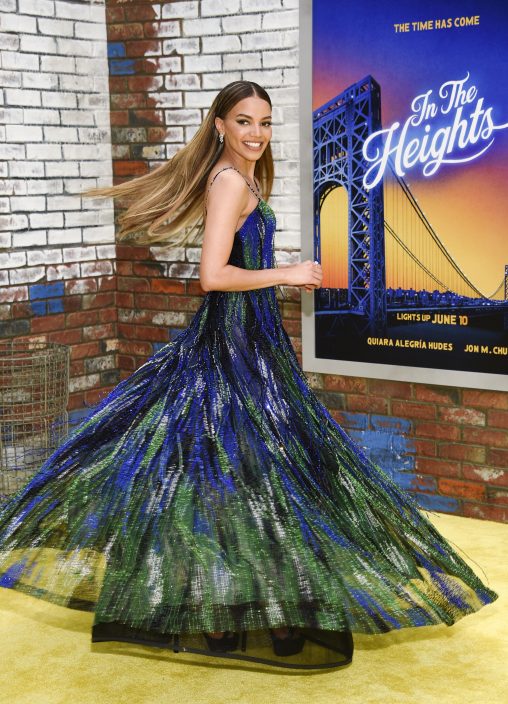 Actor Leslie Grace attends the 2021 Tribeca Film Festival opening night premiere of "In The Heights" at the United Palace theater on Wednesday, June 9, 2021, in New York. (Photo by Evan AgostiniInvisionAP)

Grace: I had been auditioning for maybe three years — I kept this little dream to myself, like a little secret, that I really wanted to act. And I thought that my first role would be a guest role as a music artist on some show, since I was just getting started. Then the opportunity for “In the Heights” came along and I was like, “I need to audition for this! I need to be a part of this!” It was my first in-person audition.

AP: We've seen you singing, dancing and acting in music videos. What was the biggest challenge of doing that now in such a huge motion picture?

Grace: I think that we all felt like Nina: She doesn’t want to let anybody down. We knew this was the biggest job that we’ve ever heard of for a Latino leading cast to tell the story and tell it in all of its brilliance and splendor, and also do good on the neighborhood that Lin loves so much. The challenges for me were to feel like I had something of value to bring when I’d never ever been on a move set, and doing it with such brilliant people. So you’re overcoming your own insecurities to see what you can bring to your character. And then, the dancing. Man! As a music artist, I’ve done choreography, but never like this before. 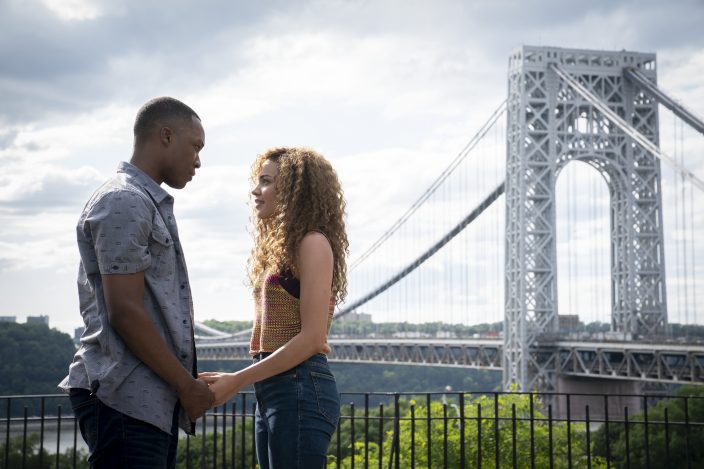 AP: You share the screen with veteran actor Jimmy Smits as your father. How was working with him?

Grace: Jimmy was the best, like I was looking to my dad. But he is (a father figure, like) el papá de los pollitos (the father of the little chickens). He’s Jimmy Smits! So everyday I’m walking to set, I’m like, “I get to play Jimmy Smits’ daughter. What do I have to bring to this table?” Like, “I’m trying to learn from you while I’m acting.” What an incredible person to learn from. It was intimidating, but all that intimidation that I had internally was met with so much love and so much generosity and emotional availability. He really just cradled me. Everybody did. It was beautiful.

AP: I read that your mother owns a beauty salon. 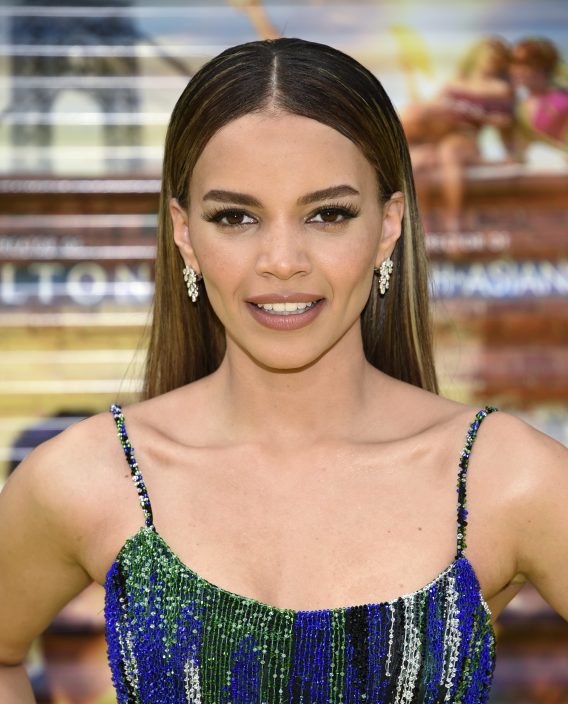 Actor Leslie Grace attends the 2021 Tribeca Film Festival opening night premiere of "In The Heights" at the United Palace theater on Wednesday, June 9, 2021, in New York. (Photo by Evan AgostiniInvisionAP)

Grace: Yeah! She doesn’t run a salon anymore, but she has been a real-life salon lady all her life.

AP: What did she think of the salon ladies and your salon scene in the movie?

GRACE: It was another full-circle moment. My parents had come to visit me on the set for the first time and something had changed in the schedule, we weren’t supposed to be in the salon, but she arrived just as we were going to rehearse “No Me Diga.” So she walks in and she sees the front desk and the hair dryers and she’s like, “¡Este es como mi salón!” ("This is like my salon!") The crazy thing is, this is the place where my parents’ stories are lived. My mom’s first salon business was a couple blocks away from where we were shooting... I get to be a part of a story that’s cherishing my mom’s story and my mom gets to witness it by coming to visit her little girl on set while she’s living her own wildest dreams.