A look at what's happening around the majors on Saturday:

The Nationals will see how Max Scherzer is feeling, a day after he exited a start against San Francisco in which he threw just 12 pitches. 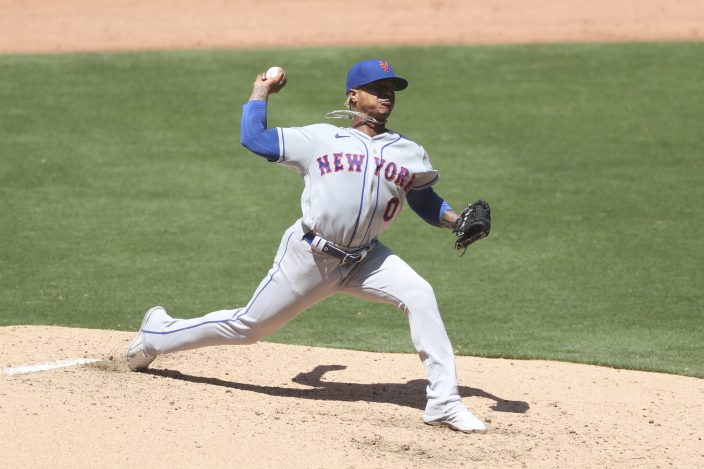 There was no immediate report on Scherzer’s condition.

Scherzer got Giants leadoff hitter LaMonte Wade Jr. to fly out for the first out of the game. Washington manager Dave Martinez and trainer Paul Lessard went out to the mound to check on Scherzer after he threw a 96 mph fastball that made the count 3-2 on Brandon Belt.

Scherzer got down and squatted, then stretched from side to side before throwing one pitch in front of Martinez and Lessard. Scherzer left after that warmup throw.

The three-time Cy Young Award winner entered the game with a 5-4 record and a 2.22 ERA.

Padres right-hander Joe Musgrove (4-5, 2.33 ERA) faces Mets righty Marcus Stroman (5-4, 2.41) in a showdown of veteran pitchers who are with their hometown teams.

Musgrove was traded to San Diego in the offseason and has taken a star turn after growing up in nearby El Cajon, California. He threw the franchise’s first no-hitter in April.

Stroman, from nearby Long Island, has returned to peak form since joining New York during the 2019 season. He’s 9-6 with a 3.03 ERA in 23 starts overall with the Mets.

TOP OF THE HILL

Tampa Bay Rays left-hander Rich Hill looks to keep up his impressive run when the 41-year old faces the Baltimore Orioles. Hill is 4-1 with an 0.68 ERA (three earned runs, 39 2/3 innings) in his last seven starts. It’s the lowest ERA by a Rays traditional starter over a seven-start span in franchise history.

Right-hander Kevin Gausman (7-0) is unbeaten in 12 starts and takes an NL-best 1.27 ERA into his outing for the San Francisco Giants at Nationals Park. Erick Fedde (4.35) goes for Washington.

In an unusual Saturday start to a series of only two games, the Yankees send right-hander Jameson Taillon (1-4, 5.09) to the mound in Philadelphia against Phillies right-hander Vince Velasquez (2-1, 4.33) in a rematch of teams that met in the 2009 World Series, won by New York in six games.