Elvis Andrus hit a winning single in the ninth inning after making pair of fielding gaffes, and the Oakland Athletics beat the Kansas City Royals 4-3 on Friday night.

With the score 3-3, Matt Chapman doubled over leaping third baseman Hanser Alberto with one out and Seth Brown was intentionally walked by Scott Barlow (2-2).

Andrus, whose .213 average coming in was 140th among 143 qualified batters, followed with a sharp liner to right, and Chapman scored with a headfirst slide ahead of Jarrod Dyson's throw. 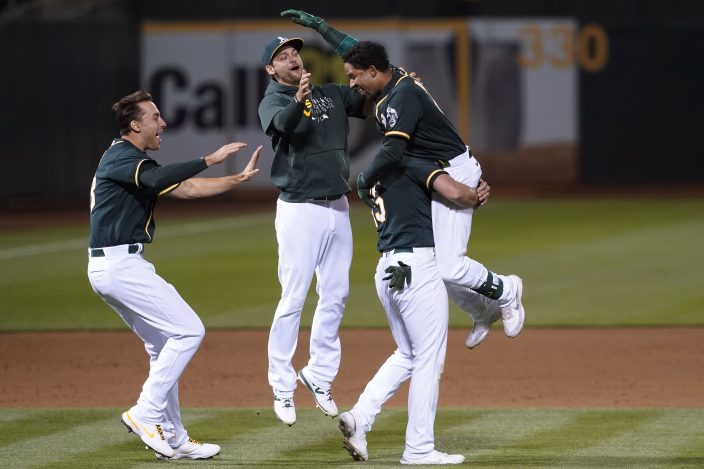 Oakland Athletics' Elvis Andrus, top right, is congratulated by teammates after hitting a single to score Matt Chapman during the ninth inning of a baseball game against the Kansas City Royals in Oakland, Calif., Friday, June 11, 2021. (AP PhotoJeff Chiu)

Andrus made a two-out fielding error on Michael Taylor’s grounder to shortstop that led to an unearned run in the eighth. Andrus then was slow on his throw to second baseman Jed Lowrie on Hanser Alberto’s grounder, extending the inning.

Seth Brown homered to snap a long funk for the A’s. Chapman had three hits including an RBI double.

Salvador Pérez hit solo homers in the seventh against Cole Irvin and the eighth against former teammate Jake Diekman, becoming the first Kansas City player to homer twice from the seventh inning on since Mike Moustakas at Baltimore on Sept. 12, 2015. He joined Bo Jackson in 1987 as the only Royals with three multihomer games by the end of June. 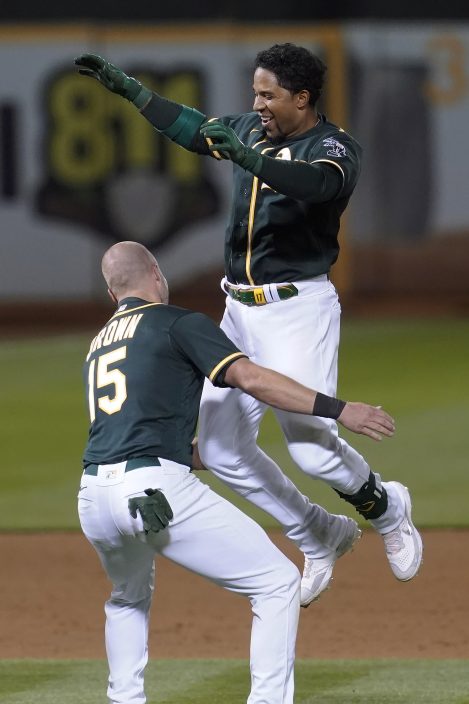 Oakland Athletics' Elvis Andrus, top, is congratulated by Seth Brown after hitting a single to score Matt Chapman during the ninth inning of the team's baseball game against the Kansas City Royals in Oakland, Calif., Friday, June 11, 2021. (AP PhotoJeff Chiu)

The A’s are 7-2 in June, tied with the Angels and Brewers for the best in the majors.

Pérez hit his 15th home run of the season leading off the seventh, then connected for a tying shot in the eighth for his ninth career multihomer game. 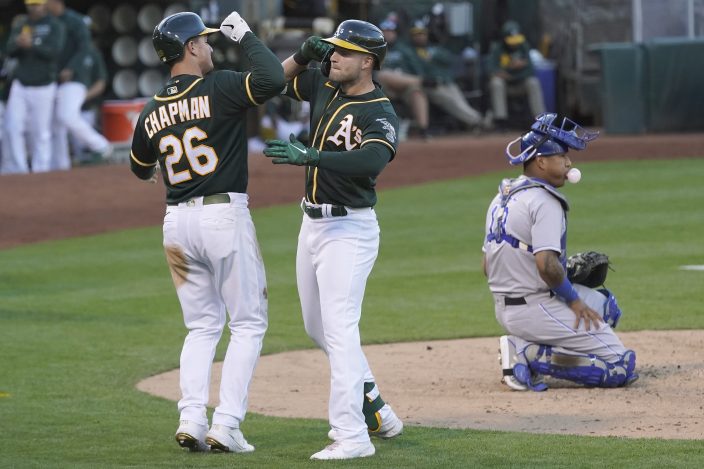 Brown snapped a 1 for 30 funk with his two-run homer off Brady Singer in the fourth.

PLAY AT THE PLATE

The Royals bungled a chance to add on in the eighth when Andrew Benintendi was thrown out trying to score from first on Hunter Dozier’s bloop to center. Benintendi appeared to hesitate briefly after rounding third, and A’s first baseman Matt Olson made a perfect relay throw to catcher Aramis Garcia who tagged Benintendi as he slid headfirst,. 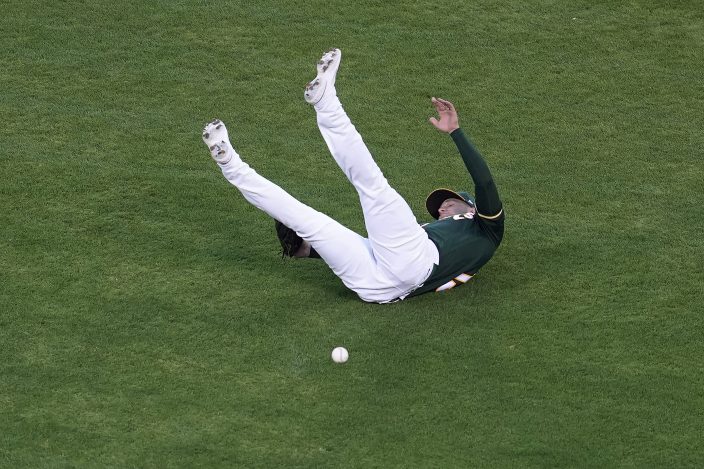 Diekman has three blown saves this season. ... Whit Merrifield played in his 369th consecutive game, the longest active streak in the majors. ... Nearly two weeks after a foul ball by Juan Lagares of the Angels broke a pane of glass above the second deck at the Coliseum, the window has yet to be replaced. 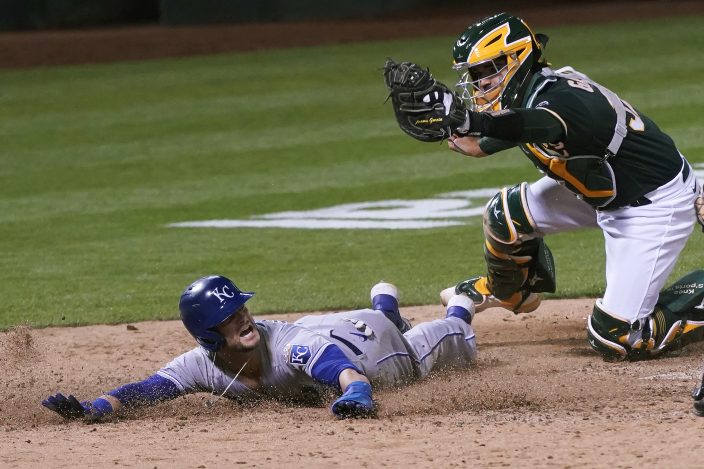 Kansas City Royals' Andrew Benintendi, left, looks for the call after being tagged out at home by Oakland Athletics catcher Aramis Garcia during the eighth inning of a baseball game in Oakland, Calif., Friday, June 11, 2021. (AP PhotoJeff Chiu)

Chapman made a nifty running catch to track down Andrew Benintendi’s foul ball in the second inning before stumbling over the bullpen mound near the stands behind third base. 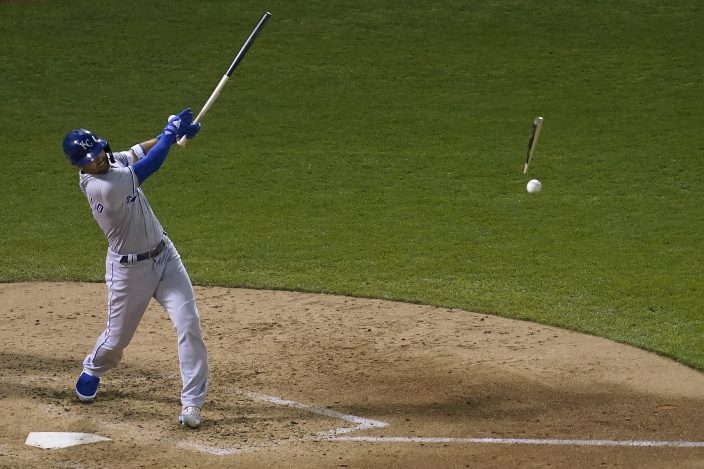 Kansas City Royals' Whit Merrifield breaks his bat while lining out against the Oakland Athletics during the seventh inning of a baseball game in Oakland, Calif., Friday, June 11, 2021. (AP PhotoJeff Chiu)

Royals: Manager Mike Matheny was pleased with how well LHP Danny Duffy threw Thursday but said how Duffy responds a day after is more important. Duffy has been on the injured list since May 17 with a left forearm flexor strain. 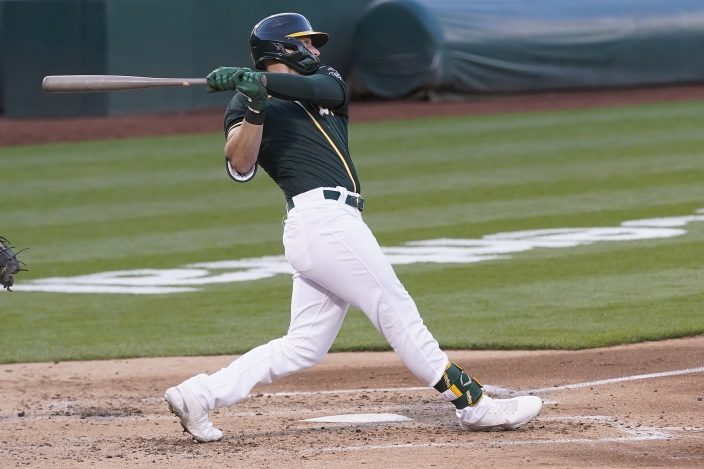 A’s rookie RHP James Kaprielian (2-1, 3.08 ERA) faces the Royals for the first time Saturday as he continues his comeback from Tommy John surgery in 2017. Kaprielian has allowed two or fewer earned runs in four of his five starts. RHP Jackson Kowar (0-1, 54.00) starts for Kansas City after allowing four runs and retiring two batters in his major league debut against the Angels on Monday.

Olson, A's rough up Kowar as Athletics romp past Royals 11-2