Shohei Ohtani struck out eight, hit two doubles at the plate and pushed through an injury scare to lead the Los Angeles Angels past the slumping Arizona Diamondbacks 6-5 in 10 innings on Friday night.

Max Stassi's RBI groundout scored Jared Walsh in the top of the 10th to put the Angels ahead for good. Extra innings were needed after Arizona's Eduardo Escobar hit a two-out, tying homer off Raisel Iglesias (4-2) in the ninth.

Alex Claudio earned his first save of the season by getting the final out when Stephen Vogt struck out on a check swing with two on. Arizona lost its eighth in a row. 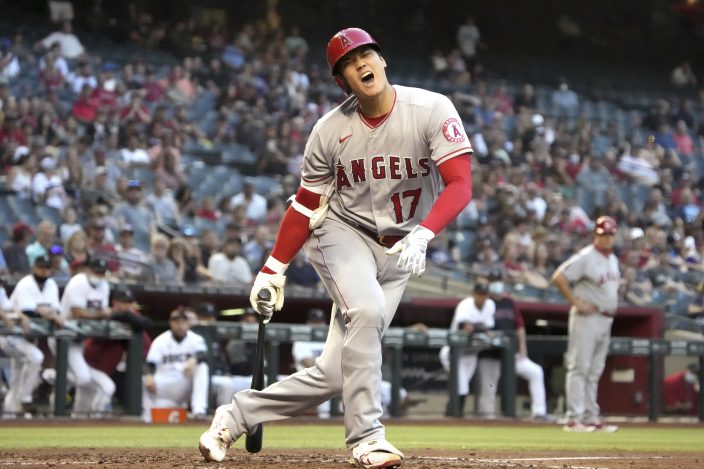 Los Angeles Angels' Shohei Ohtani reacts after fouling a pitch off his foot in the third inning during a baseball game against the Arizona Diamondbacks, Friday, June 11, 2021, in Phoenix. (AP PhotoRick Scuteri)

It was another big night for Ohtani following a few worrisome moments in the third inning.

The two-way star — who was batting second — fell to his knees and grimaced in pain after fouling a ball of the inside of his right knee. He eventually got up and limped around for a few minutes as he talked with the team’s training staff.

The 26-year-old stayed in the game and a few pitches later lined an RBI double to right center that came off the bat at 114.9 miles per hour. He also threw a fastball that hit 99.6 mph in the bottom half of the inning. 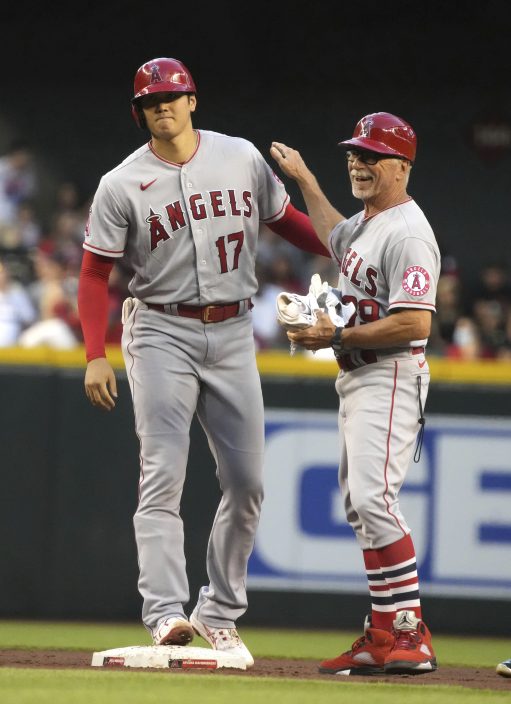 Los Angeles Angels' Shohei Ohtani (17) laughs with first base coach Bruce Hines after hitting an RBI-double against the Arizona Diamondbacks in the third inning during a baseball game, Friday, June 11, 2021, in Phoenix. (AP PhotoRick Scuteri)

Ohtani gave up two runs on five hits and two walks in five innings. He ran into trouble on the mound in the fifth with runners on first and second with one out.

The right-hander balked twice in the span of a few pitches, which brought home Josh Rojas. Ohtani looked like he got the third out of the inning when he struck out Eduardo Escobar, but the pitch was in the dirt and skipped past catcher Kurt Suzuki. Escobar was able to make it to first while Ketel Marte scored.

Ohtani exited with a 3-2 lead, then moved to play right field. He added a double in the seventh to push Justin Upton to third base. Upton later scored on a wild pitch to give the Angels a 5-4 lead. 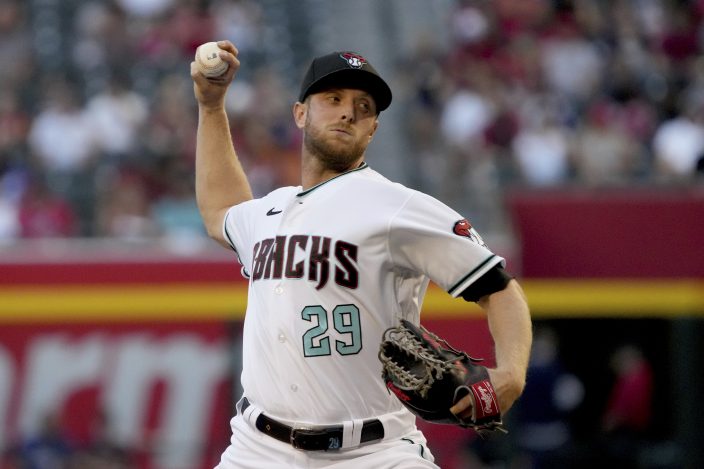 The Diamondbacks tied the game at 4 in the sixth after Rojas' RBI single scored Nick Ahmed. 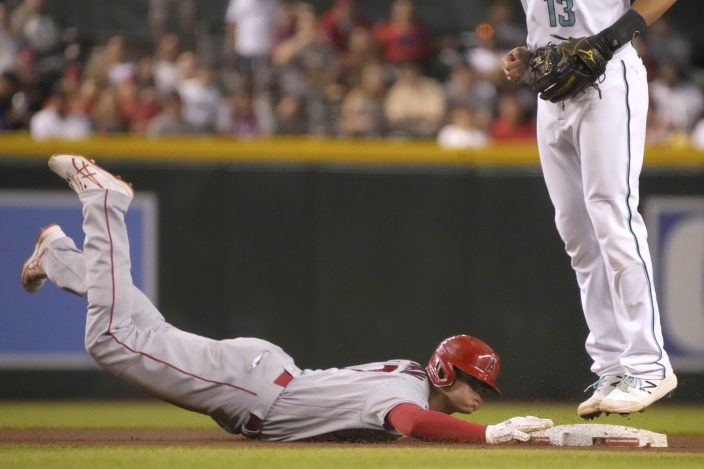 Buchter promptly hit Suzuki with his next pitch. Lovullo then replaced Buchter with righty Riley Smith (1-4). 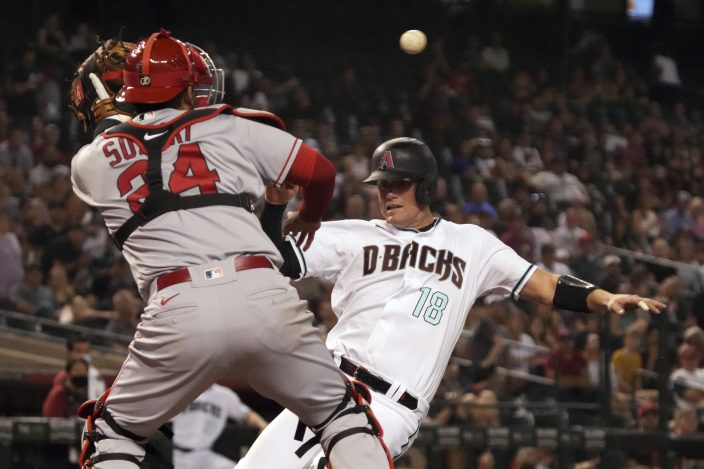 Since 2020, MLB changed the rules that pitchers have to face at least three consecutive batters unless there's an injury or the end of the inning. 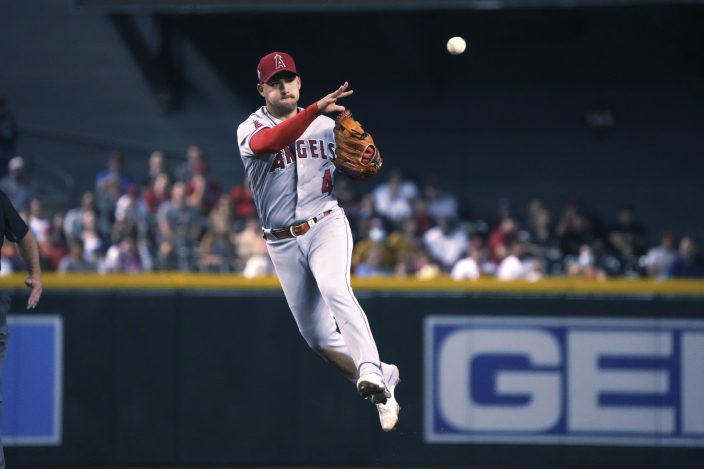 Los Angeles Angels shortstop Jose Iglesias makes an off-balance throw to first for an out on Arizona Diamondbacks' Ketel Marte in the sixth inning during a baseball game Friday, June 11, 2021, in Phoenix. (AP PhotoRick Scuteri)

The D-backs came into the game batting .231 and scored just 12 runs over the previous six-game road trip. 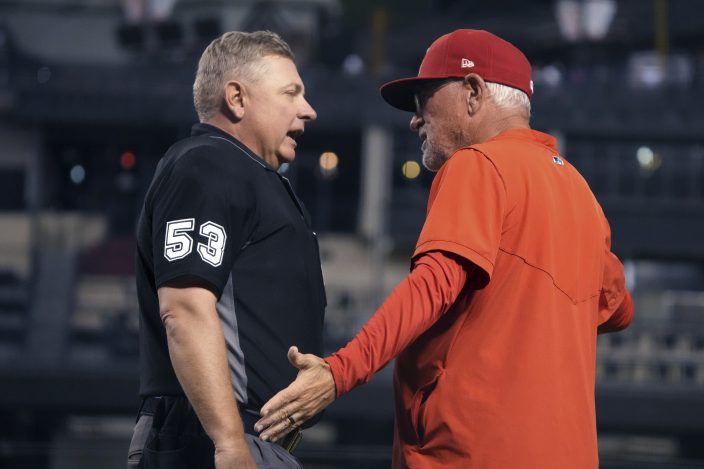 Los Angeles Angels manager Joe Maddon talks to umpire Greg Gibson after Shohei Ohtani was called for his second balk of the night, in the fifth inning of the team's baseball game against the Arizona Diamondbacks, Friday, June 11, 2021, in Phoenix. (AP PhotoRick Scuteri)

Kelly had his own injury scare in the fifth inning when he took a line drive off his right shoulder that came off Ohtani's bat at 108.7 mph.

In a stroke of good fortune for the D-backs, the ball bounced off Kelly's arm directly to first baseman Asdrubal Cabrera, who tagged Ohtani for the out. Kelly stayed in the game and got the next batter, Anthony Rendon, to pop up for the third out. 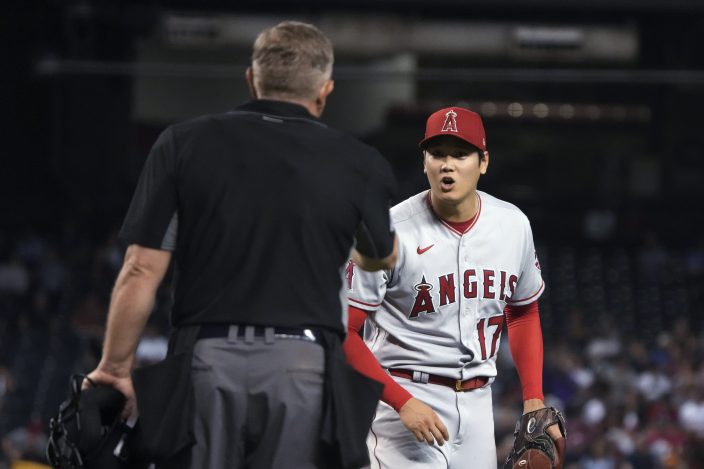 Angels: Suzuki left the game in the 10th after getting hit by a pitch for the second time on Friday. He was hit on the left hamstring. He was replaced by pinch-runner Griffin Canning, who is usually a pitcher.

Diamondbacks: RHP Zac Gallen (elbow sprain) recently threw a bullpen and is scheduled to throw a simulated game on Saturday. ... LHP Madison Bumgarner (shoulder inflammation) has resumed playing catch. He hasn't pitched since June 2 after being removed after two innings against the Mets.

Arizona Diamondbacks' David Peralta reacts after hitting a double against the Los Angeles Angels during the fourth inning of a baseball game Friday, June 11, 2021, in Phoenix. (AP PhotoRick Scuteri)