MOSCOW — Russia’s national coronavirus taskforce reports the country’s tally of daily new infections has risen by almost half over the past week and more than doubled in Moscow.

Moscow authorities said enforcement of mask- and glove-wearing on mass transit, in stores and in other public places will be strengthened and violators could face fines of up to 5,000 rubles ($70). 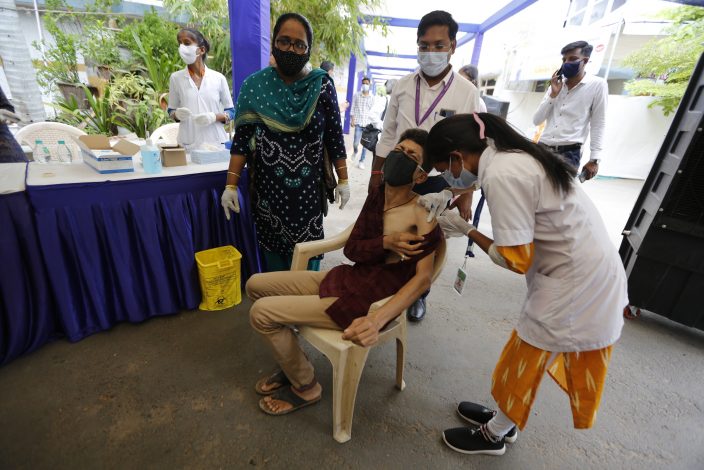 A physically disabled man gets a dose of Covishield, Serum Institute of India's version of the AstraZeneca COVID-19 vaccine, during a drive through vaccination organized for disabled people in Ahmedabad, India, Saturday, June 12, 2021. (AP PhotoAjit Solanki) 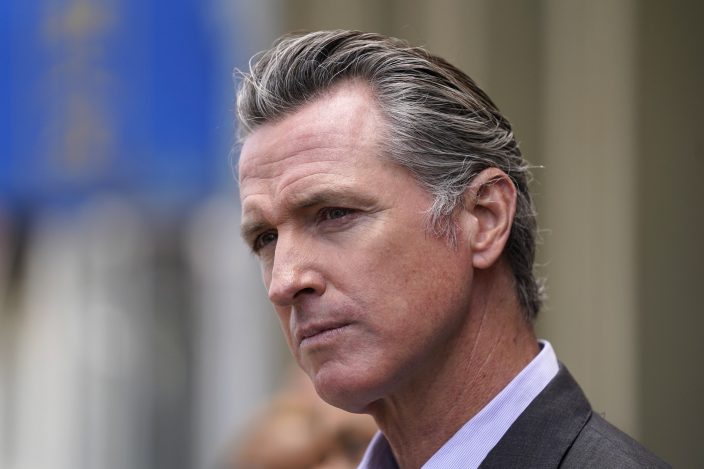 FILE - In this June 3, 2021 file photo, California Gov. Gavin Newsom listens to questions during a news conference outside a restaurant in San Francisco While governors across the country are ending all or most of their coronavirus restrictions, many of them are keeping their pandemic emergency orders in place. Those orders allow them to restrict public gatherings and businesses, mandate masks, sidestep normal purchasing rules, tap into federal money and deploy National Guard troops to administer vaccines. (AP PhotoEric Risberg, File)

HERE'S WHAT ELSE IS HAPPENING

ISTANBUL — Turkey is stepping up its COVID-19 vaccination program, with nearly 600,000 doses administered in the previous 24 hours.

Health minister Fahrettin Koca also tweeted Saturday that human trials for a domestic vaccine are in the final stage. 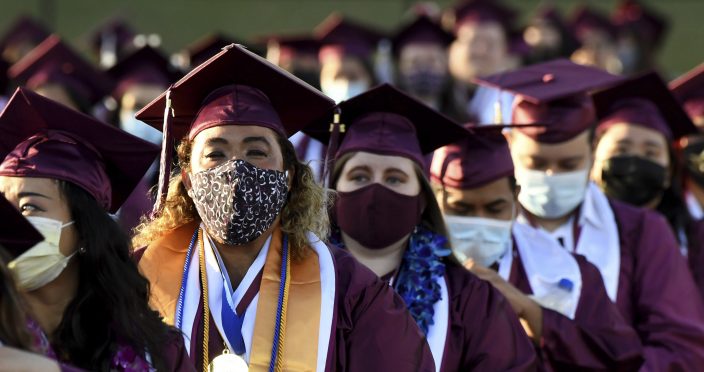 President Recep Tayyip Erdogan last month announced an intensification of vaccinations in June as the country seeks to revive its struggling economy, particularly the tourism industry.

The daily infections dropped from a high of 63,000 in mid-April to 6,261 on Friday, according to official data. 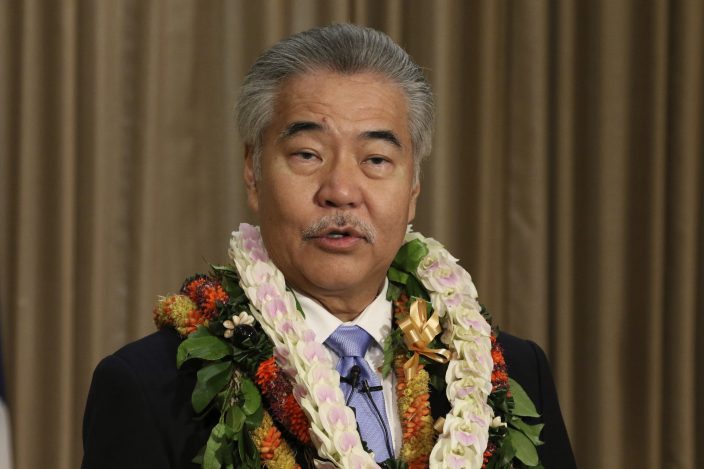 FILE - In this Jan. 21, 2020, file photo, Gov. David Ige speaks to reporters in Honolulu after delivering his state of the state address at the Hawaii State Capitol. While governors across the country are ending all or most of their coronavirus restrictions, many of them are keeping their pandemic emergency orders in place. Those orders allow them to restrict public gatherings and businesses, mandate masks, sidestep normal purchasing rules, tap into federal money and deploy National Guard troops to administer vaccines. (AP PhotoAudrey McAvoy, File)

Tourism remains restricted due to a Russian ban on most flights and Britain’s requirement that travelers from Turkey pay for quarantine hotel stays and PCR tests. But Germany says it will relax quarantine requirements on July 1.

On Monday, Turkey is expected to start vaccinating people ages 40-49.

SACRAMENTO, Calif. -- California Gov. Gavin Newsom has signed an executive order that will lift most of the state’s coronavirus rules. 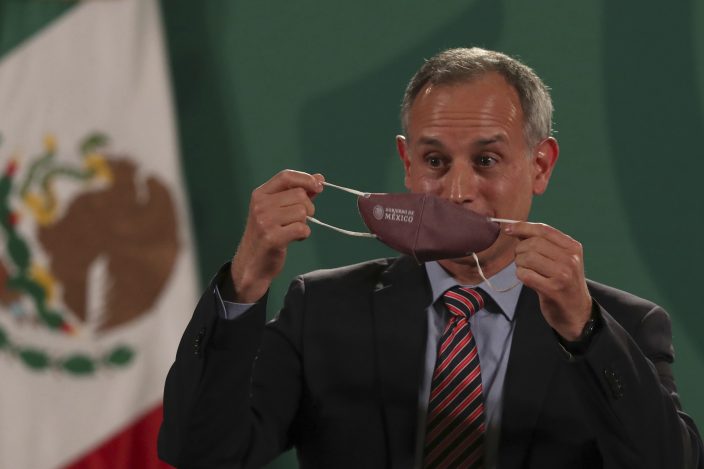 The order Newsom signed Friday takes effect Tuesday. It will end the state’s stay-at-home order and its various amendments.

Starting Tuesday, there will be no capacity limits or physical distancing requirements for businesses. Fully vaccinated people can stop wearing masks in most places.

Newsom said he will not end the statewide declaration of emergency. That ensures the governor has the power to alter or suspend state laws in the future. That has angered Republican lawmakers who say the declaration is unnecessary.

HONOLULU — Honolulu is loosening some restrictions on social activity now that more than half its population has been vaccinated against COVID-19.

Karaoke bars and nightclubs may operate at 50% capacity if all attendees are tested for the disease or show proof they have been fully vaccinated.

The city will allow gatherings of 25 indoors and 75 outdoors once 60% of the population has been vaccinated. All limits will be lifted when the vaccination rate tops 70%.

Honolulu reported 25 new cases of COVID-19 on Thursday, down 25% from two weeks earlier.

CHICAGO — Officials declared Chicago fully reopened on Friday, ending a requirement that people wear face masks in most indoor places and lifting capacity limits intended to slow the spread of the coronavirus.

Chicago sometimes veered from the state’s restrictions and opted to be stricter or more lenient than the state required. But city officials decided to join the rest of Illinois in lifting restrictions Friday, nearly 15 months after Gov. J.B. Pritzker issued the first stay-at-home order as coronavirus cases began to rise.

People who aren’t vaccinated must still wear a mask indoors, and everyone will still need to wear masks inside health care facilities, jails, shelters, schools, taxis, ride-hailing vehicles and on public transportation. Businesses can still opt to require people to wear masks on their premises.

FALMOUTH, England — U.N. Secretary General Antonio Guterres welcomes commitments by the U.S. and Britain to share millions of coronavirus vaccine shots with struggling countries. But he says it’s not enough.

Without a global effort, Guterres says the coronavirus could “spread like wildfire” in much of the developing world.

Leaders from the Group of Seven wealthy democracies are expected to commit to share at least 1 billion vaccine shots with poorer countries, with half the doses coming from the U.S. and 100 million from the U.K.

Guterres says to defeat the virus, countries producing vaccines need to form an emergency task force to coordinate an effective response to COVID-19.

“We need a concerted effort, we need a global vaccination plan,” says Guterres, who will join the summit. “If not, the risk is there will still be large areas of the developing world where the virus spreads like wildfire.”

SACRAMENTO — Gov. Gavin Newsom says he’s confident his workplace regulators will soon fall in line with California’s plan to drop virtually all masking requirements for people vaccinated against the coronavirus.

The California Occupational Safety and Health Standards Board is set to consider revising its conflicting rules Thursday, two days after the state eases its pandemic restrictions. Newsom said Friday that he expects to make sure the worksite regulations take effect along with the planned reopening.

Businesses have been baffled by the shifting rules over who needs to wear masks and where once the nation’s largest state fully reopens from the pandemic.

JACKSON, MISS. — Due to lagging demand for shots, Mississippi has transferred well over three-quarters of a million doses from its federal coronavirus vaccine allocation to other states.

In recent months, the state has transferred 871,950 vaccine doses to Rhode Island, Maine and a nationwide vaccine pool, said Liz Sharlot, spokesperson for the Mississippi Department of Health. Maine is among the states in the U.S. with the highest vaccination rates.

Mississippi has the lowest vaccination rate in the country, with around 29% vaccinated. Just over 930,650 people in the state are fully vaccinated, according to data provided by the state Department of Health.

Sharlot said 32,400 doses of the Moderna vaccine set aside for Mississippi by the federal government were sent to Rhode Island on April 20, and 32,400 doses to Maine.

The state has transferred at least 807,150 doses to a federal vaccine pool. The state’s first transfer to the pool was May 6.

Each week, the federal government provides every state with a number of available doses to be ordered and distributed to providers, Sharlot said. This number is based on “provider demand and the individual state’s needs,” Sharlot said.

Officials with the state Department of Health review the number of doses made available for Mississippi to order each week and determine whether to order additional doses, or send the doses to the federal pool for other states to use.

LONDON — The U.K. has recorded its highest coronavirus infections since late February, the majority from the delta variant first identified in India.

Government figures on Friday showed 8,125 new cases, the highest since Feb. 26. The delta variant, which is considered about 40% more transmissible than the previous dominant strain, accounts for more than 90% of all new infections in the U.K.

There are concerns the next planned lockdown easing in England on June 21 may be delayed because of the increase in cases. Prime Minister Boris Johnson will announce Monday whether social distancing restrictions will be lifted.

The hope is the rapid rollout of vaccines will break the link between new cases and deaths, especially as most cases are among younger age groups. On Friday, another 17 coronavirus-related deaths were announced, taking the confirmed total to 127,884, the highest in Europe.

ROME — Italy is recommending the AstraZeneca vaccine only for people over age 60, saying younger people who received a first AstraZeneca shot should get Pfizer or Moderna for their second shot.

The government’s scientific committee revised its vaccine strategy after reviewing the latest data on cases of rare blood clots in people who received AstraZeneca. It’s acting now because the virus has drastically decreased, thanks to months of restrictions and a vaccine campaign that inoculated 45% of the population with at least one shot.

While cases of blood clots after a second dose are “extraordinarily rare,” the committee is recommending a different vaccine for a second dose for people under age 60, according to Dr. Franco Locatelli, head of the scientific committee.

Other countries, including France and Canada, have made similar recommendations. The European Medicines Agency still recommends people who received a first AstraZeneca vaccine to follow up with the same shot.

COLOMBO, Sri Lanka — Sri Lanka extended its lockdown for another week, amid a surge of coronavirus deaths in recent weeks.

Sri Lanka is under a nearly three-week lockdown, scheduled to end on June 14. But on Friday, the government announced it will remain until June 21.

The new restrictions come as the coronavirus death toll crossed the 2,000 mark on Friday. It took 14 months to reach the first 1,000 deaths, while the second 1,000 deaths came in just 23 days.

People are banned from leaving their homes, while food and other essentials will be distributed through mobile vendors. However, the government says the ban will not apply to those engaged in essential service such as health, food supply, communications and power sectors. Factories, construction sites and agriculture sectors can operate.

Doctors and health workers have urged the government to keep the existing travel ban to contain the spreading of the coronavirus. Sri Lanka’s total confirmed cases have reached 216,134.

WASHINGTON — U.S. regulators are allowing the release of 10 million doses of Johnson & Johnson’s COVID-19 vaccine from a troubled Baltimore factory.

However, material to make many more doses must be thrown out because of possible contamination, according to a person familiar with the decision.

The FDA announced Friday it had determined that two batches from the plant could be released. But it says several other batches are not suitable for use and additional batches are still under review. The doses originated at an Emergent BioSolutions factory, known as Bayview, that is making the vaccine for J&J.

A second person familiar with the decision confirmed it would allow for 10 million doses to be released. Both people spoke to the AP on condition of anonymity because they weren’t authorized to release details about it ahead of its announcement.

— By Zeke Miller and Linda A. Johnson

TOKYO — The question of allowing any local fans into Tokyo Olympic venues is still being debated, with a decision not expected before the end of the month.

Fans from abroad have already been banned in what is shaping up as a largely made-for-television Olympics.

Tokyo organizing committee president Seiko Hashimoto originally said she would announce a decision in April but has repeatedly postponed it.

Ticket sales were to account for $800 million in income for the organizing committee. Most of that income will be lost and have to be made up by Japanese government entities.

The postponed Tokyo Olympics are scheduled to open on July 23.