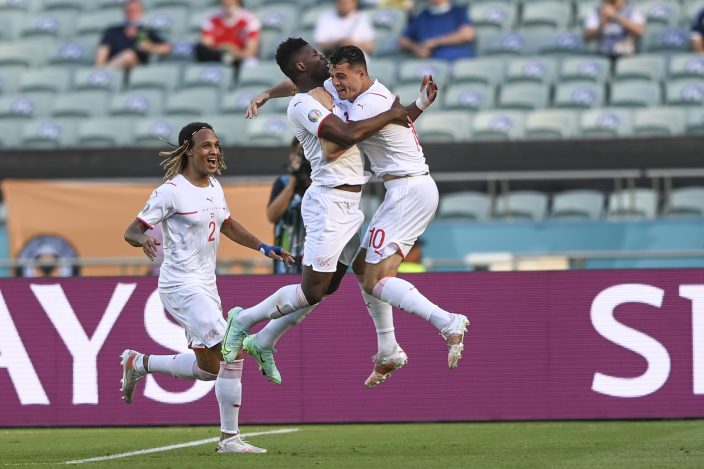 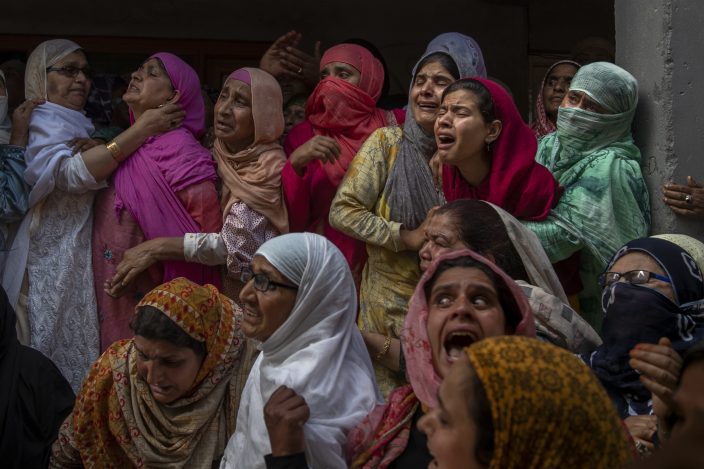 Relatives and neighbors wail during the funeal of Waseem Ahmed, a policeman who was killed in a shootout, on the outskirts of Srinagar, Indian controlled Kashmir, Sunday, June 13, 2021. Two civilians and two police officials were killed in an armed clash in Indian-controlled Kashmir on Saturday, police said, triggering anti-India protests who accused the police of targeting the civilians. (AP Photo Dar Yasin)

G7-SUMMIT — Leaders of the world’s largest economies unveil an infrastructure plan for the developing world to compete with China’s global initiatives, but there’s no immediate consensus on how forcefully to call out Beijing over human rights abuses. Citing China for its forced labor practices is part of President Joe Biden’s campaign to persuade fellow democratic leaders to present a more unified front to compete economically with Beijing. By Jonathan Lemire, Aamer Madhani and Jill Lawless. SENT: 1,020 words, photos, video. UPCOMING: 1,000 words, photos, video by 4 p.m. WITH: G7-BREXIT— Turbulence from the divorce between the U.K. and the European Union provides an unwanted distraction at the Group of Seven summit. SENT: 670 words, photos.

BIDEN-PUTIN-BEHIND-CLOSED-DOORS — If President Biden has any private words with Russia’s Vladimir Putin at their meeting on Wednesday, U.S. interpreters and diplomats will be standing by to document their high-stakes encounter. It’s a decades-old system meant to ensure that senior officials, and ultimately historians, have a record of what American presidents say to international leaders. And it’s one that held up — mostly — even under President Donald Trump, including when he confiscated the notes taken by his American interpreter at a meeting with Putin in 2017. By Ellen Knickmeyer. SENT: 880 words, photos.

VIRUS OUTBREAK — India’s economy was on the cusp of recovery when a new wave of infections swept the country, infecting millions, killing hundreds of thousands and forcing others to stay home. Cases are now tapering off, but many Indians face drastically worse prospects: salaried jobs are vanishing, incomes are dropping and inequality is on the rise. Experts say decades of progress in alleviating poverty are imperiled. By Krutika Pathi. SENT: 1,200 words, photos. 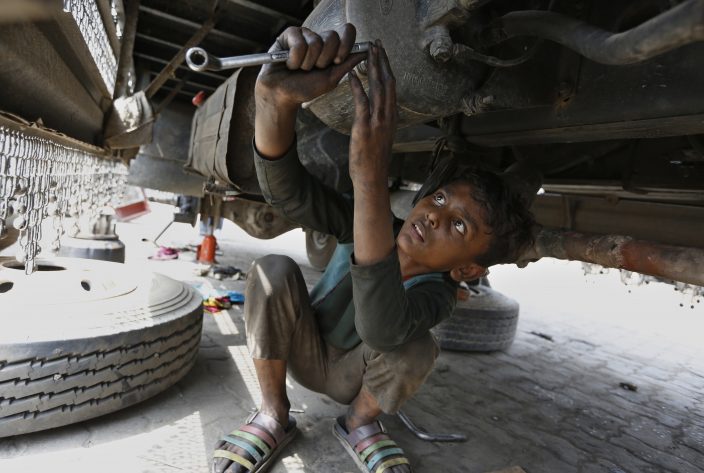 VIRUS OUTBREAK-EMERGENCY-ORDERS — With COVID-19 cases declining and vaccinations increasing, governors across the U.S. are wrestling with decisions about when to declare an end to the emergency declarations they have issued and reissued throughout the pandemic. More than a half-dozen states already have ended their coronavirus emergencies, and more states could join that list soon. Republicans generally are leading the push, but some Democrats also are supporting such moves. By David A. Lieb. SENT: 1,185 words, photos.

CRITICAL-RACE-THEORY-TEACHERS — Laws setting guiderails for classroom instruction on race passed this year in Republican-controlled states have left some teachers worried about how they will be enforced. Particularly in districts with large numbers of people of color, educators say they worry everyday discussions about students’ experiences could land teachers in hot water. Professional teachers associations and some school boards have blasted the laws as disrespecting teachers’ judgment and opening the door to censorship. By Kimberlee Kruesi and Michael Melia. SENT: 865 words, photos. Eds: This story has moved as the Sunday Spotlight.

EURO-2020-PLAYER-COLLAPSES — The European Championship game between Denmark and Finland has been suspended after Christian Eriksen needed urgent medical attention on the field near the end of the first half. Eriksen was given treatment for about 10 minutes after collapsing on the field before being carried off on a stretcher. UEFA then announced the game had been suspended “due to a medical emergency.” A stadium announcer asked fans to stay in their seats until further information could be provided. By Mattias Karen. SENT: 300 words, photos, developing.

BEZOS-SPACE — An auction for a ride into space next month alongside Jeff Bezos and his brother ended with a winning $28 million bid Saturday. The Amazon founder’s rocket company, Blue Origin, did not disclose the winner’s name following the live online auction. SENT: 280 words, photos.

CHINA'S-WANDERING-ELEPHANTS — China’s famed wandering elephants are on the move again, heading southwest while a male who broke from the herd is still keeping his distance

BRITAIN-QUEEN-OFFICIAL-BIRTHDAY — Fresh from charming leaders at the Group of Seven summit, Queen Elizabeth II was back at her residence at Windsor Castle to view a military parade to mark her official birthday. SENT: 640 words, photos.

SAUDI-HAJJ — Saudi Arabia announced this year’s hajj pilgrimage will be limited to no more than 60,000 people, all of them from within the kingdom, due to the ongoing coronavirus pandemic. SENT: 440 words, photo.

VIRUS OUTBREAK-TRAVEL — The airline industry’s recovery from the pandemic passed a milestone as more than 2 million people streamed through U.S. airport security checkpoints on Friday for the first time since early March 2020. SENT: 490 words.

VIRUS OUTBREAK-BRITAIN — British Prime Minister Boris Johnson gave a strong hint that the next planned relaxation of coronavirus restrictions in England this month will be delayed as a result of the spread of the delta variant first identified in India. SENT: 760 words, photos.

VIRUS-OUTBREAK-RUSSIA — Moscow’s mayor ordered a week off for some workplaces and imposed restrictions on many businesses to fight coronavirus infections that have more than doubled in the past week. SENT: 365 words, photos.

VIRUS-OUTREAK-THAILAND — Some restrictions to protect against the spread of COVID-19 will be lifted in the Thai capital of Bangkok beginning early next week, the country’s prime minister announced. SENT: 400 words, photo.

MEDICARE-PRESCRIPTION-DRUGS — Democrats are committed to passing legislation this year to curb prescription drug prices, but they’re still disagreeing on how to cut costs for patients and taxpayers while preserving profits that lure investors to back potentially promising treatments. SENT: 920 words, photos.

BIDEN-INFRASTRUCTURE-CLIMATE — President Biden wants to channel billions of dollars into infrastructure projects to fight climate change, but he must win over Republicans who say it’s unnecessary and excessive spending. Key Democrats are warning that negotiating with the GOP is a waste of time that will produce no viable compromise. The White House may need to choose: go green or go bipartisan. SENT: 980 words, photos.

VIOLENT CRIME — At least 32 people were wounded by gunfire, including 2 people killed, in three separate incidents in Austin, Texas; Savannah, Georgia; and Chicago as the weekend began, stoking some U.S. experts' and law enforcement leaders’ concern that lifted coronavirus restrictions will exacerbate troublingly high rates of gun violence. UPCOMING: 700 words, photos by 3 p.m. With DOWNTOWN-SHOOTING-AUSTIN — Someone opened fire in a popular entertainment district in downtown Austin, wounding 13 people, including two critically, before getting away, authorities said. SENT: 310 words, photos.

AFGHANISTAN — Separate bombs hit two minivans in a mostly Shiite neighborhood in the Afghan capital, killing at least seven people and wounding six others, the Interior Ministry said. The attacks targeted minivans on the same road about 1.25 miles apart in a neighborhood in western Kabul. SENT: 300 words, photos.

SRI LANKA-SHIP-FIRE — Sri Lanka is seeking an interim claim of $40 million from the operator of a fire-ravaged cargo ship to cover part of the cost of fighting the blaze, officials say. SENT: 300 words, photos.

FRANCE-ANTI-FAR-RIGHT PROTEST — France’s far-left leader got a faceful of flour at the start of a Paris march Saturday against “the ideas of the far right.” SENT: 360 words, photos.

BRITAIN-ACTIVIST SHOT — A second teenager has been charged with conspiracy to murder in the shooting in London last month of a prominent member of the Black Lives Matter movement in the U.K. SENT: 280 words.

KASHMIR-REBEL ATTACK — Indian authorities say a gunbattle between militants and Indian police in the disputed region of Kashmir has killed at least two police and two civilians. SENT: 300 words.

GERMANY-ANTISEMITISM — A leading Jewish group in Germany has condemned the desecration of a Torah ark inside a prayer room at Frankfurt’s international airport. SENT: 180 words.

MED—AMA-MEETING-RACE — The nation’s largest, most influential doctors’ group is holding its annual policymaking meeting amid backlash over its most ambitious plan ever — to help dismantle centuries-old racism and bias in all realms of the medical establishment. SENT: 820 words, photo.

TEN--FRENCH OPEN — Unseeded Barbora Krejcikova wins her first Grand Slam title by beating Anastasia Pavlyuchenkova 6-1, 2-6, 6-4 in the French Open final. This is only the fifth major tournament in singles for Krejcikova. The Czech is the third unseeded women’s champion in the last five years at Roland Garros. SENT: 750 words, photos.

BKN--JAZZ-CLIPPERS — Donovan Mitchell and the Utah Jazz take a 2-0 lead over the Clippers into Game 3 of the Western Conference semifinals. Los Angeles, led by Kawhi Leonard and Paul George, rallied from a 2-0 hole against Dallas in the first round. The Clippers have lost nine of their last 11 home playoff games. UPCOMING: 750 words, photos. Game starts 8:30 p.m.

HKN--SEMIFINALS PREVIEW — After exclusively divisional play this season and through the first two rounds, the NHL playoffs are down to a final four of teams that haven’t played each other all year: Islanders vs. Lightning and Golden Knights vs. Canadiens. SENT: 750 words, photos.