Marcus Ericsson raced to his first IndyCar victory Saturday in the action-packed opener of the doubleheader at the Raceway at Belle Isle Park.

The Swede became the seventh driver to win through seven IndyCar races this season, and he's the fourth first-time winner this year. It was the first victory for the former Formula One driver since a GP2 race at Nurburgring in 2013. 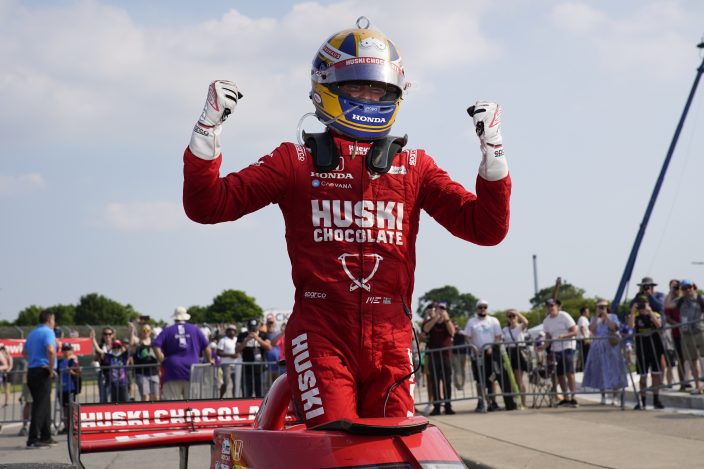 It was the first victory for Chip Ganassi Racing's No. 8 car since 1994 when Michael Andretti won at Toronto. The seven different winners through seven races ties an IndyCar record set in 1958 and matched in 2000 and 2017.

Ericsson benefitted from the second red-flag stoppage, this one with six laps remaining when Romain Grosjean crashed in Turn 9. An earlier accident sent Felix Rosenqvist to a hospital for evaluation and caused a 78-minute stoppage to repair the tire barrier and concrete wall damaged when what appeared to be a stuck throttle sent Rosenqvist smashing into the wall.

Will Power had control and led a race-high 37 of the 70 laps until the Grosjean crash. IndyCar threw the red flag and Power immediately screamed over his radio for Team Penske to bring him water and a fan. 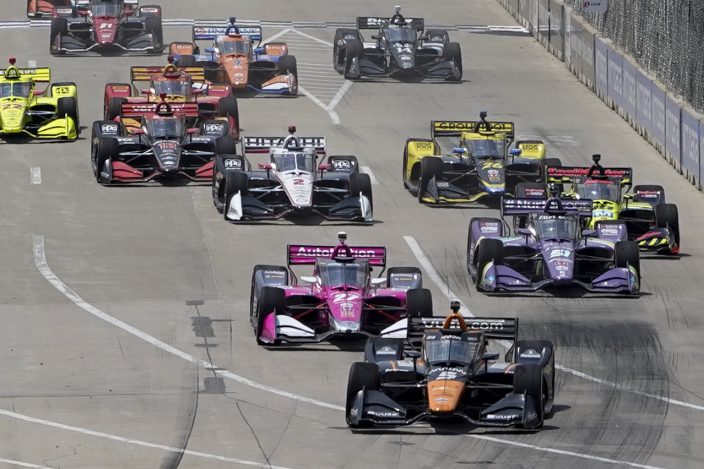 Although IndyCar had mandated the use of an aerodynamic device designed to circulate air in the cockpit, the drivers were overheated on a hot and humid Detroit day. Some drivers wore cooling vests or other new technology to help with heat on the bumpy, rough 2.35-mile, 14-turn circuit considered one of the most physical in IndyCar.

But IndyCar initially stopped the Penske crewmember from going to Power's car, but the series eventually relented and the drivers received aid during the nine-minute stoppage.

It was too late for Power, though. His car would not restart when it was time for the race to resume and IndyCar waved Ericsson past him into the lead as Power sat idled on pit road awaiting a replacement for his electronic control unit. “I'm mad at IndyCar because I'm the first guy (on pit road) and they wait for the last car to come to get a fan on that car and it roasts the ECU,” Power seethed. "The guys up there in race control never listen to any drivers. They never listen. They don't care. We give them so many good suggestions and they don't care.

“Like, I'm screaming on the radio to get a fan because ECU always overheats. You're working your ass off for this sport, so much money goes into, and just dumb decisions like that. If it's not dumb yellows they throw, it's some stupid idea like this or red flags.”

Chip Ganassi Racing, meanwhile, now has three wins from four its drivers with Ericsson in victory lane for the first time in 37 races over three seasons. His only other career podium came at Belle Isle in 2019 when he finished second.

IndyCar did not race in Detroit last year because of the pandemic.

Ericsson inherited the lead when Power could not get his car to restart and then had to hold off hard-charing Rinus VeeKay and Pato O'Ward over the final three laps to seal the victory. He celebrated by climbing into the James Scott Memorial Fountain, per tradition, but he then straddled a lion that was spitting water and raised his fists in the air.