Jean Segura scored Ronald Torreyes with an infield single in the 10th inning for his second straight game-ending hit and the Philadelphia Phillies got a third consecutive walkoff win with an 8-7 victory over the New York Yankees on Saturday.

Travis Jankowski led off the bottom of the inning against Aroldis Chapman (4-2) by reaching on the pitcher’s error. Jankowski bunted to the left side of the mound, and Chapman fielded the ball, checked Torreyes at second base, then huried a throw high to first. Torreyes, the designated runner, advanced to third. 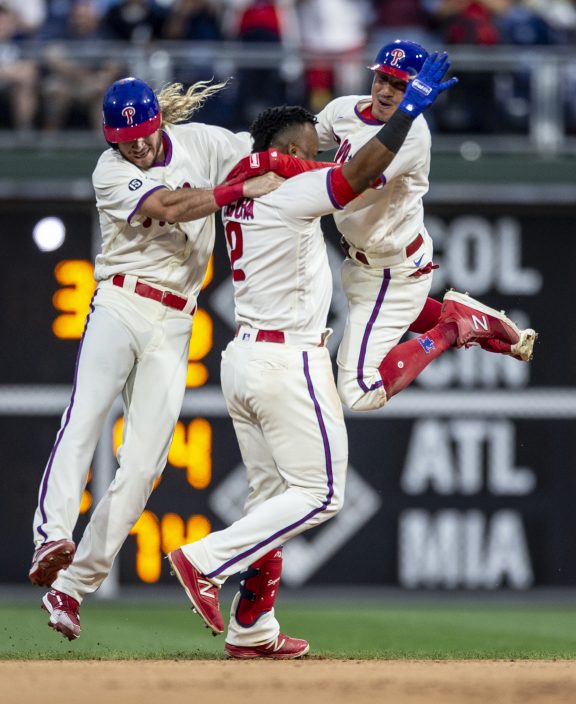 Odubel Herrera popped out, then Segura hit a hard grounder to third baseman Gio Urshela, who dived toward the line to catch it but couldn't relay the ball home ahead of the sprinting Torreyes.

Segura hit a two-run single off the wall in left-center Thursday to wrap a 4-3 win over the Braves. Luke Williams’ homer in the ninth on Wednesday sent the Phillies to the first of their three dramatic wins. 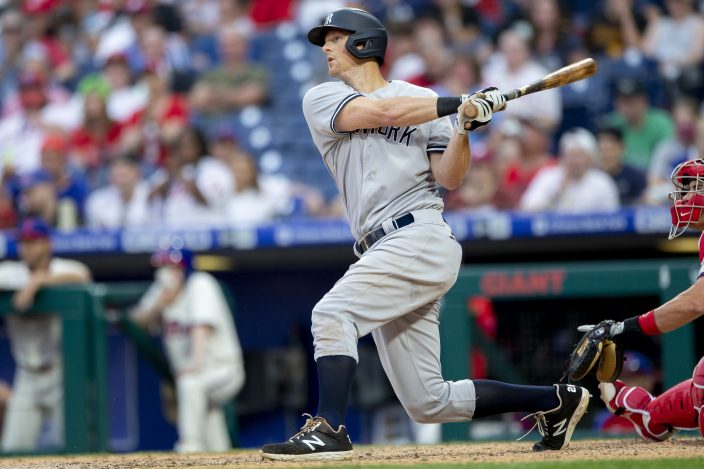 Bryce Harper doubled, had two singles and drove in two for the Phillies, who have won five of six.

Sánchez hit a solo homer and had an RBI single, and Rougned Odor also went deep for the Yankees, who have lost six of eight.

Hector Neris blew his fourth save in 13 chances for Philadelphia in the ninth. 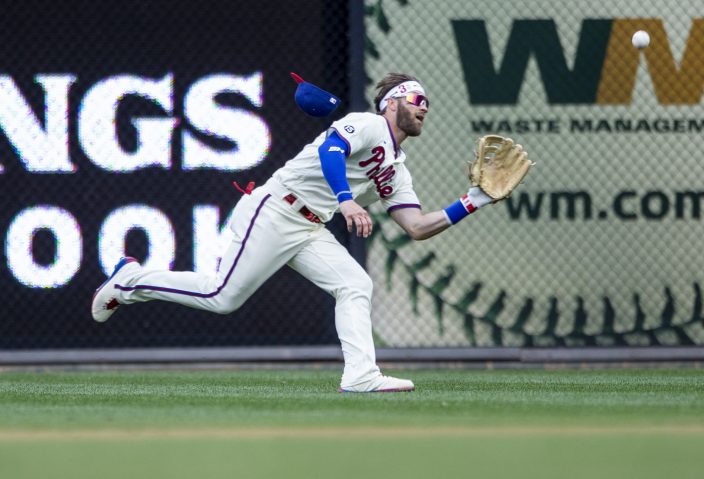 After starting the frame with an out, Neris walked Brett Gardner and Tyler Wade. LeMahieu tied it by driving a 2-2, 84-mph splitter over the wall in left for his fourth homer, causing an eruption from the large contingent of Yankees fans in attendance.

The Phillies nearly won it in the ninth after Harper's leadoff double against Chad Green. Rhys Hoskins popped out and Andrew McCutchen was intentionally walked before Torres made a game-saving, diving stop on Alec Bohm's grounder up the middle. Torres kept the ball in the infield to prevent Harper from scoring and flipped to second for an out. Green struck out Torreyes to end the inning. 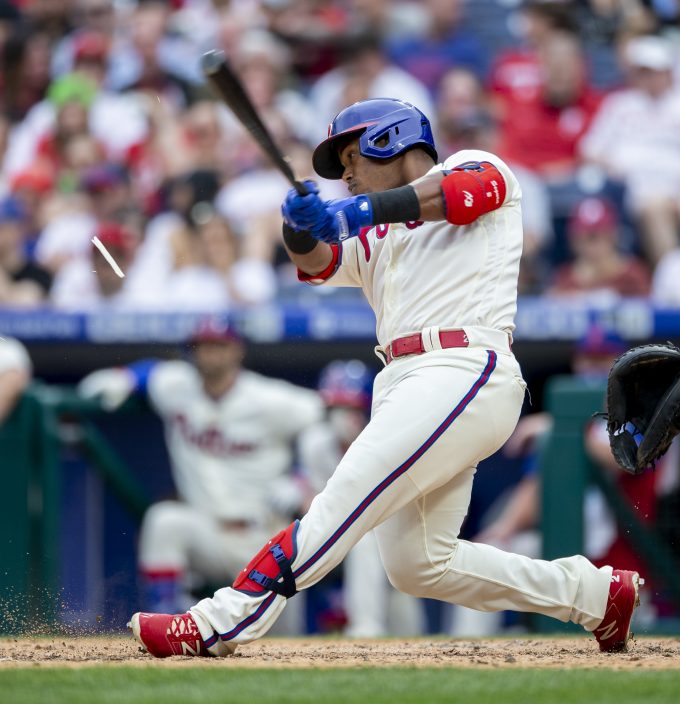 Philadelphia Phillies' Jean Segura cracks his bat on an RBI single during the fourth inning of a baseball game against the New York Yankees, Saturday, June 12, 2021, in Philadelphia. (AP PhotoLaurence Kesterson)

Chapman, the Yankees’ closer, lost his second consecutive outing. He gave up two homers in New York’s 7-5 loss at Minnesota on Thursday.

The Phillies scored four runs in the first against Jameson Taillon, who recorded just one out before being lifted. After three singles to open the game, Harper followed with a two-run single to center. Two batters later, McCutchen hit a sacrifice fly, and Taillon’s day was done after surrendering Bohm’s RBI single. 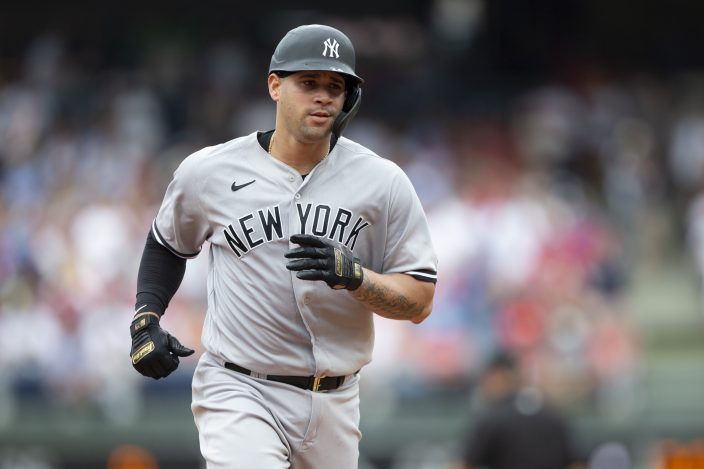 New York Yankees' Gary Sanchez (24) rounds the bases after hitting a home run during the second inning of a baseball game against the Philadelphia Phillies, Saturday, June 12, 2021, in Philadelphia. (AP PhotoLaurence Kesterson)

It was the shortest outing ever for Taillon, whose ERA rose from 5.09 to 5.74. The right-hander’s previous shortest career stint was 1 2/3 innings, also in Philadelphia while pitching for the Pirates on April 19, 2018. In three starts at Citizens Bank Park, the No. 2 overall pick in the 2010 draft has an 11.57 ERA with nine runs and 13 hits allowed in seven innings. 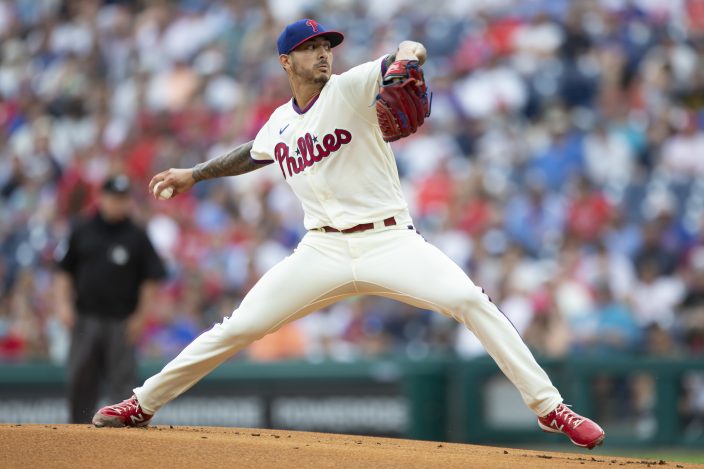 In the second series since restrictions were lifted on fan attendance in Philadelphia, a crowd of 38,450 was the largest for the Phillies since 2019. Yankees fans appeared to make up at least half of those in attendance, with many “Let's Go Yankees!” chants popping up through the game.

Yankees: RHP Luis Severino (recovery Tommy John surgery) was removed from a minor league rehab start with a right groin injury. He will have an MRI on Sunday. Severino was making his second rehab start, pitching for High-A Hudson Valley against Brooklyn. ... LHP Zack Britton was reinstated from the 60-day IL and pitched a 1-2-3 seventh inning with a strikeout. Britton had surgery for a bone spur in his left elbow on March 15. ... 1B Luke Voit (right oblique strain) will begin a rehab assignment on Sunday.