César Hernández scored on a throwing error by pitcher Paul Sewald in the 10th inning, completing the Cleveland Indians’ rally for a 5-4 victory over the Seattle Mariners on Saturday.

After scoring three times with two outs in the ninth to make it 4-all, Cleveland loaded the bases with no outs in the 10th.

Harold Ramírez hit a comebacker to Sewald (2-2), who threw high and wide of the plate. Catcher Tom Murphy jumped to grab the errant throw, but automatic runner Hernández slid home with the game-winning run. 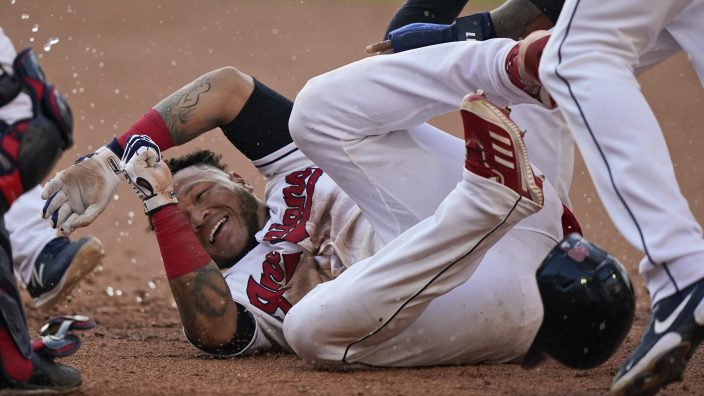 Cleveland Indians' Harold Ramirez is mobbed by teammates after they defeated the Seattle Mariners in 10 innings in a baseball game, Saturday, June 12, 2021, in Cleveland. (AP PhotoTony Dejak)

Cleveland trailed 4-0 after seven, but got on the board in the eighth when Hernández homered off Kendall Graveman. Mariners lefty Yusei Kikuchi had limited the Indians to three singles over the first seven frames.

The Indians forced extra innings with three runs in the ninth against closer Rafael Montero, who retired the first two batters. Pinch-hitter Bobby Bradley had an RBI single to make it 4-2 and René Rivera followed with a two-run double off the wall in left.

Cleveland’s eighth pitcher of the afternoon, James Karinchak (3-2), worked a perfect 10th for the victory. The Mariners fell to 3-6 on a 10-game, 11-day road trip that concludes Sunday at Progressive Field. 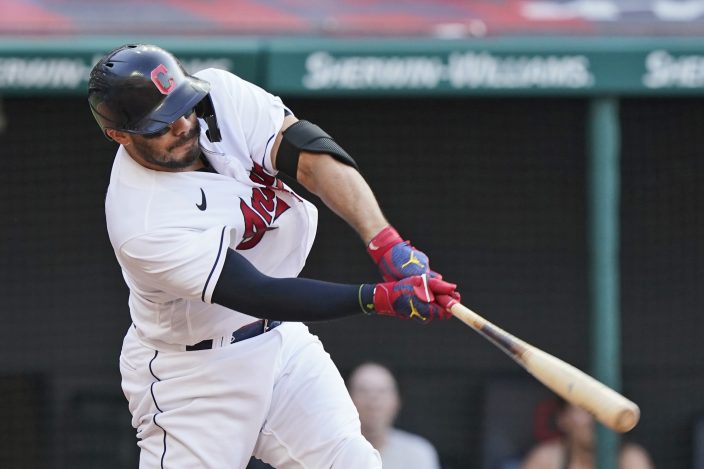 Hank Fraley hit a two-run homer in the third and Dylan Moore had a solo shot in the seventh for Seattle.

Moore had two hits and two RBIs in his return from a 22-game absence with a strained left calf. Ty France added two hits for the Mariners, which went 0 for 14 with runners in scoring position and left 11 on base.

Kikuchi worked on extended rest after being hit on the right knee by a comebacker from David Fletcher on June 5 against the Angels. 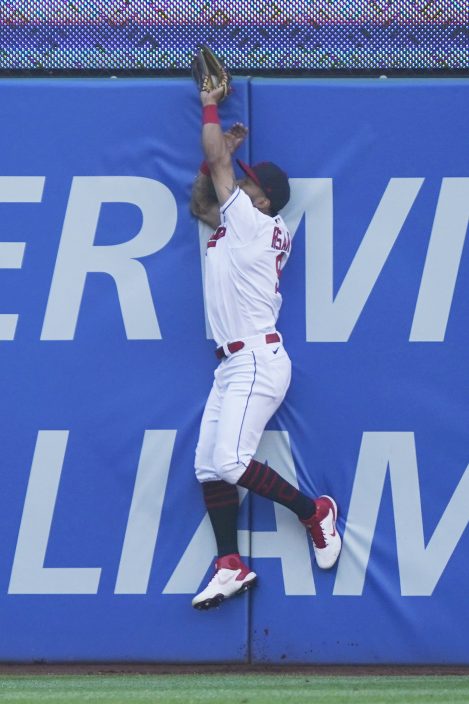 Cleveland Indians' Eddie Rosario catches a ball hit by Seattle Mariners' Taylor Trammell in the eighth inning of a baseball game, Saturday, June 12, 2021, in Cleveland. Trammell was out on the play. (AP PhotoTony Dejak)

Indians starter Triston McKenzie only recorded two outs, walking four, in his shortest appearance in the majors. The right-hander walked the bases loaded, then forced home J.P. Crawford with a free pass to Moore before being pulled.

McKenzie, who was recalled from Triple-A Columbus before the game, leads the AL with 39 walks despite being optioned to the minors three times since May 22. He threw 12 strikes in 32 pitches. 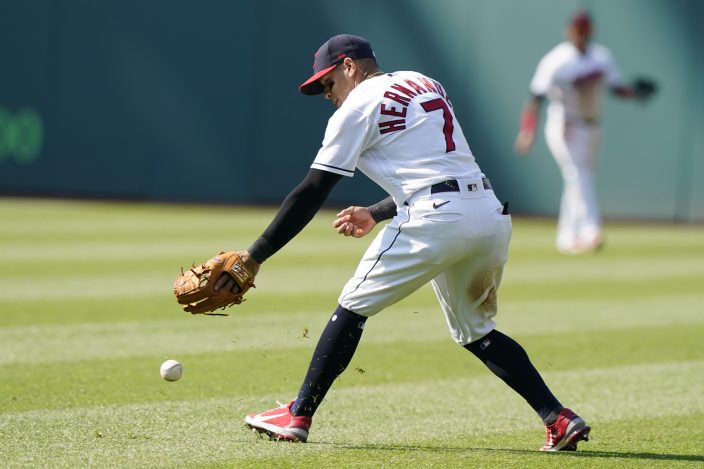 Cleveland Indians' Cesar Hernandez bobbles the ball in the third inning of a baseball game against the Seattle Mariners, Saturday, June 12, 2021, in Cleveland. Ty France was safe at first base. (AP PhotoTony Dejak)

Mariners: 1B Evan White (left hip flexor strain) went 1 for 4 with a three-run homer in the first game of his rehabilitation assignment Friday with Triple-A Tacoma. White has been on the 10-day IL since May 14.

Indians: C Austin Hedges (head) was not in the lineup, one day after being struck on the helmet by a pitch from Mariners RHP Justin Dunn. Manager Terry Francona said Hedges “looks terrific and is going to be OK.” 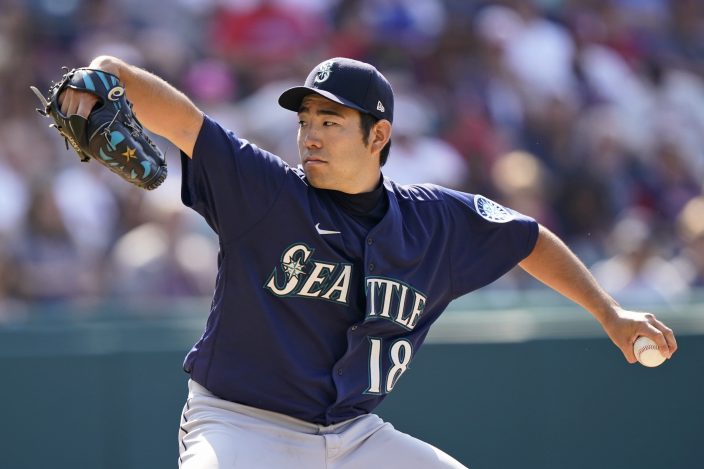 With Hedges’ availability in question, C Ryan Lavarnway traveled to Cleveland to join the taxi squad. Starter Roberto Pérez is on the IL with a fractured right ring finger, leaving Rivera as the lone healthy catcher on the Indians’ roster. 1B Yu Chang is their emergency backup. “Chang said he caught in high school, so that was good enough for me,” Francona said, laughing. 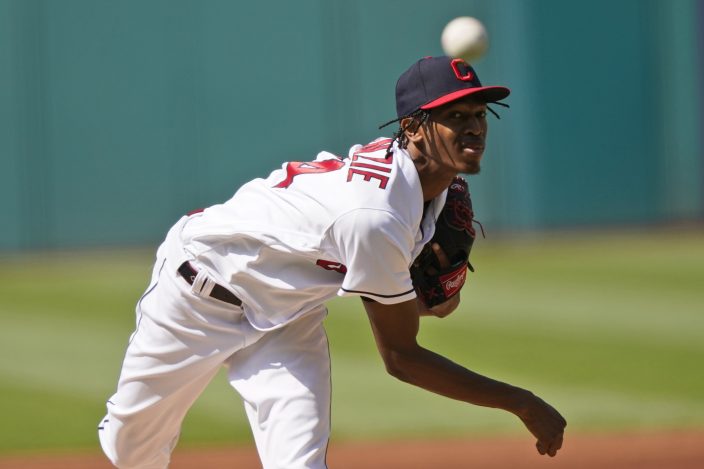 Mariners: RHP Logan Gilbert (1-2, 4.98 ERA) lost his major league debut to the Indians on May 13, giving up four runs in four innings at T-Mobile Park. 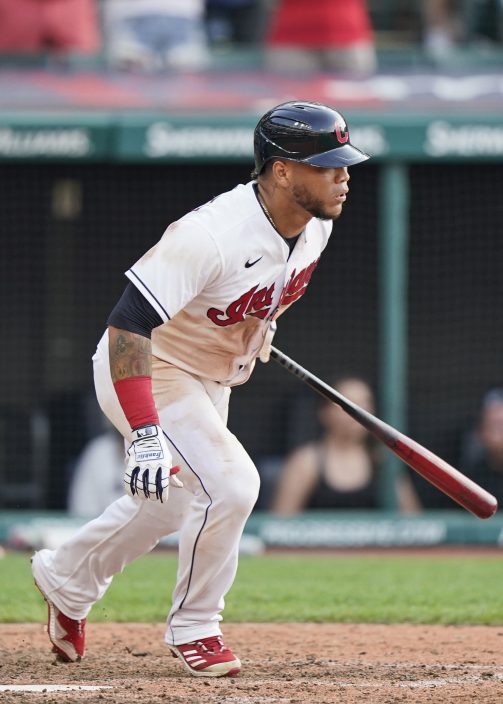 Cleveland Indians' Harold Ramirez watches after hitting against the Seattle Mariners in the 10th inning of a baseball game, Saturday, June 12, 2021, in Cleveland. Ramirez reached first base on a fielder's choice and Cesar Hernandez scored. (AP PhotoTony Dejak)