Americans Michael Taylor and his son Peter Taylor go on trial in Tokyo on Monday on charges they helped Nissan's former chairman, Carlos Ghosn, skip bail and flee to Lebanon in December 2019.

HOW DID THE TAYLORS END UP IN JAPAN?

The Taylors were arrested in Massachusetts in May 2020 and extradited to Japan in March. They have not been released on bail and are not available for comment, which is standard in Japan. They were formally charged in March with helping a criminal escape. Michael Taylor, a former Green Beret, told The Associated Press while still in the U.S. that Peter was not in Japan when Ghosn fled the country. The elder Taylor has helped parents rescue abducted children, gone undercover for the FBI and worked as a contractor for the U.S. military in Iraq and Afghanistan. 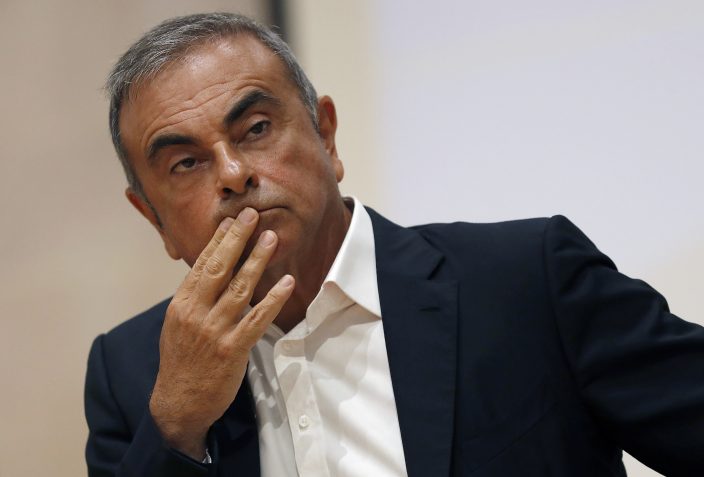 FILE - In this Sept. 29, 2020, file photo, former Nissan Motor Co. Chairman Carlos Ghosn holds a press conference at the Maronite Christian Holy Spirit University of Kaslik, as he launches an initiative to help Lebanon that is undergoing a severe economic and financial crisis, in Kaslik, north of Beirut, Lebanon. Americans Michael Taylor and his son Peter Taylor go on trial in Tokyo on Monday, June 14, 2021, on suspicion they helped Ghosn skip bail in Japan and escape to Lebanon in December 2019. (AP PhotoHussein Malla, File)

WHAT HAPPENED WITH GHOSN?

Ghosn led Japanese automaker Nissan Motor Co. for two decades before his arrest in Tokyo in November 2018. He was charged with falsifying securities reports in underreporting his compensation and with breach of trust. He says he is innocent and the compensation he is accused of not reporting was never decided on or paid. Ghosn says he feared he would not get a fair trial in Japan, where more than 99% of criminal cases result in convictions. Japanese prosecutors say he paid at least $1.3 million to organize his escape. Ghosn is on Interpol's wanted list, but Japan has no extradition treaty with Lebanon.

ESCAPE IN A BOX 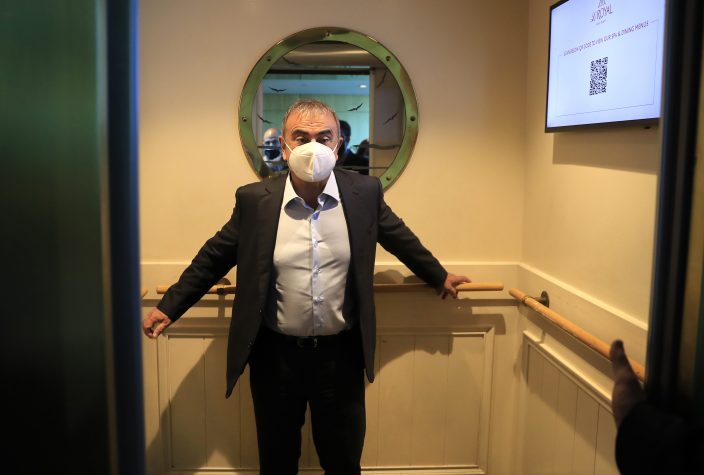 FILE - In this May 25, 2021, file photo, fugitive ex-auto magnate Carlos Ghosn stands inside the elevator on his way to an interview with The Associated Press, in Dbayeh, north of Beirut, Lebanon, Tuesday, May 25, 2021. Americans Michael Taylor and his son Peter Taylor go on trial in Tokyo on Monday, June 14, 2021, on suspicion they helped Ghosn skip bail in Japan and escape to Lebanon in December 2019. (AP PhotoHussein Malla, FIle)

Tokyo prosecutors say Michael Taylor and another man, George-Antoine Zayek, hid Ghosn in a large box meant to carry audio equipment, snuck him through airport security in Osaka, central Japan, and loaded him onto a private jet to Turkey. Peter Taylor is accused of meeting with Ghosn to help with the escape. Zayek has not been arrested. A U.S. appeals court rejected the Taylors' petition to put their extradition on hold.

The Taylors will go through the Japanese equivalent of entering a plea before a panel of three judges. They may also give statements. They have said they didn’t break any laws because skipping bail is not technically illegal in Japan. But Ghosn was not supposed to leave the country. Deputy Chief Prosecutor Hiroshi Yamamoto said prosecutors will outline the charges, but he declined to comment specifically on the case. Japanese suspects are tried even if they plead guilty.

The Taylors are held at the Tokyo detention center on the city's outskirts. Their lawyer can visit them, and they can receive snacks and books. Ghosn spent more than 100 days at the center before his release on bail. The cells are simple, with Japanese-style futon mattresses. The facility has an exercise area and clinic.

English translations will be provided and media coverage is allowed, but no filming or recording. If convicted, the Taylors face up to three years in prison and a fine of up to 300,000 yen ($2,900). They also could get suspended sentences and not serve time. In principle, people accused of crimes in Japan are presumed innocent until proven guilty. But the conviction rate is higher than 99%.

Former Nissan executive Greg Kelly, also an American, is being tried on charges of falsifying securities reports in underreporting Ghosn’s pay. He says he is innocent and was trying to find legal ways to pay Ghosn, partly to prevent him from leaving Nissan for a rival automaker. Kelly's trial began in September and a verdict isn't expected for months. If convicted, Kelly faces up to 15 years in prison.

WHAT DOES GHOSN SAY?

During the interview in Lebanon in May, Ghosn told The Associated Press he was eager to clear his name. He declined to give details of his escape. Ghosn accuses other Nissan executives of plotting to force him out to prevent him from giving its French partner, Renault, more power in their alliance. Renault sent Ghosn to Japan in 1999 to rescue the automaker when it was on the verge of bankruptcy.

HOW IS NISSAN FARING?

Nissan, which makes the Leaf electric car, the Z sportscar and Infiniti luxury models, has struggled as sales slumped during the pandemic. It expects to remain in the red this fiscal year, the third straight year of losses. Ghosn's successors have promised a turnaround.