Crystal Dangerfield was 4 of 5 from 3-point range and finished with 16 points and Minnesota beat the Los Angeles Sparks 80-64 on Saturday night, spoiling the return of Lynx great — and current Sparks assistant coach — Seimone Augustus.

The Lynx announced earlier Saturday the franchise will retire the jersey numbers of both Augustus and Rebekkah Brunson during the 2022 season. Brunson’s No. 32 and Augustus’ No. 33 will be the second and third numbers officially retired in franchise history, joining Lindsay Whalen’s No. 13.

Augustus made her return to Minnesota for the first time since announcing her retirement in May. The eight-time All-Star spent 14 of her 15 WNBA seasons with the Lynx, where she won four WNBA titles, before playing last season with the Sparks. 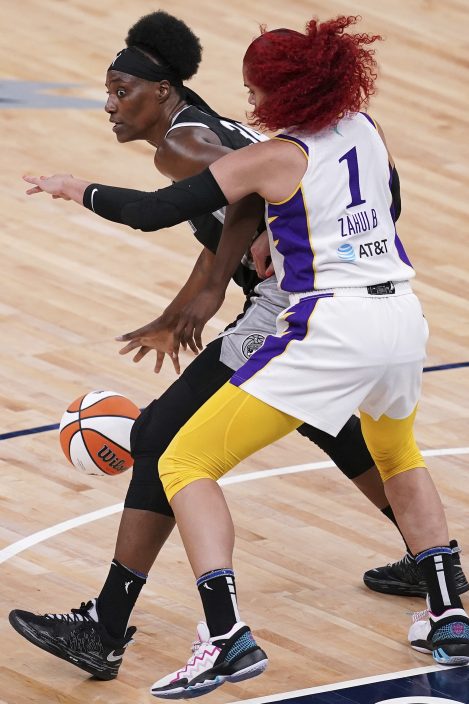 Dangerfield made back-to-back 3-pointer in a tiebreaking 10-0 run to close the first quarter and open the second and her 3 with 10.2 seconds left in the second quarter made it 49-35 at halftime. The Lynx never again trailed. 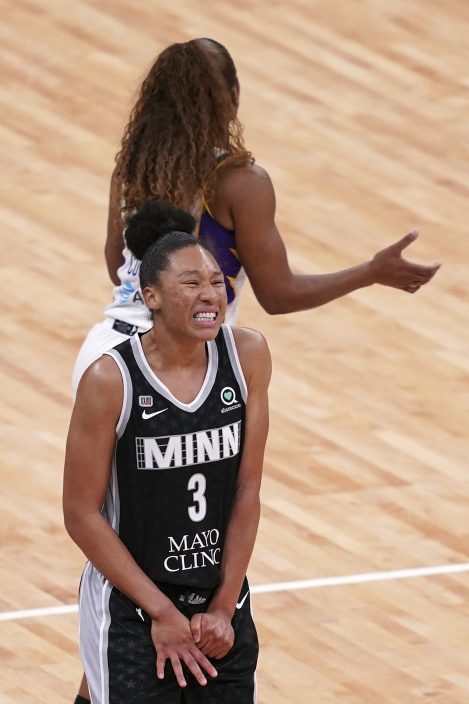 Minnesota Lynx forward Aerial Powers (3) winces as she grabs her thumb after taking a hit during the second quarter against the Los Angeles Sparks in a WNBA basketball game Saturday, June 12, 2021, in Minneapolis. (Star Tribune via AP)

Sylvia Fowles had 15 points, nine rebounds, a career-high five steals and four blocks and Banham scored 12 points, making 4 of 4 from behind the arc, for Minnesota (4-5).

Minnesota's Aerial Powers, who returned from a five-game absence due a hamstring injury, appeared to have dislocated her thumb late in the first half. She finished the second quarter and played about five minutes in the third before leaving the game for good.