President Joe Biden and Turkish counterpart Recep Tayyip Erdogan have known each other for years, but their meeting Monday will be their first as heads of state. And it comes at a particularly tense moment for relations between their two countries.

The list of disagreements is unusually long for the two NATO allies: There's U.S. support for Kurdish fighters in Syria, as well as Turkey’s purchase of a Russian weapons system. And in April, Biden infuriated Ankara by declaring that the Ottoman-era mass killing and deportations of Armenians was “genocide.”

Previous U.S. presidents had avoided using the term out of concern that it would complicate ties with Turkey, which is fiercely proud of its Ottoman history and insists that those killed in the early 20th century were victims of civil war and unrest. 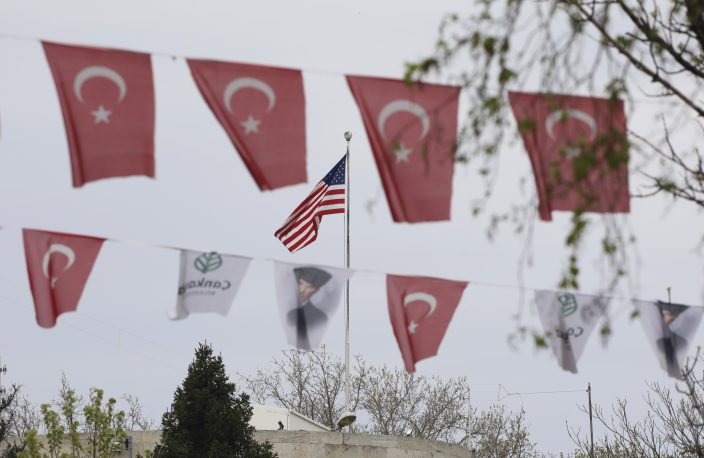 FILE - In this April 25, 2021, file photo, Turkish flags and banners depicting Mustafa Kemal Ataturk, the founder of modern Turkey, decorate a street outside the United States embassy in Ankara, Turkey. President Joe Biden and Turkish counterpart Recep Tayyip Erdogan have known each other for years, but their meeting Monday, June 14, 2021, will be their first as heads of state. (AP PhotoBurhan Ozbilici, File)

However, besides blasting the decision in speeches, Erdogan didn't hit back at Washington. The muted response suggests he wants a good relationship with Biden, said Rachel Ellehuus, an analyst at the Washington think tank Center for Strategic and International Studies.

“Not least because he needs that economic relationship with the U.S. and the appearance of a cooperative relationship in order to retain his base, which is very much built on a functioning Turkish economy that is tethered into the West," Ellehuus said.

Erdogan, in power for 18 years as prime minister and then president, has dialed down his anti-Western rhetoric as his government grapples with an economic downturn made worse by the coronavirus pandemic. His ruling AKP party has recently been hit by a series of corruption allegations, including drug trafficking and arms smuggling, made by a fugitive mafia boss who has been releasing tell-all videos on social media, without evidence. 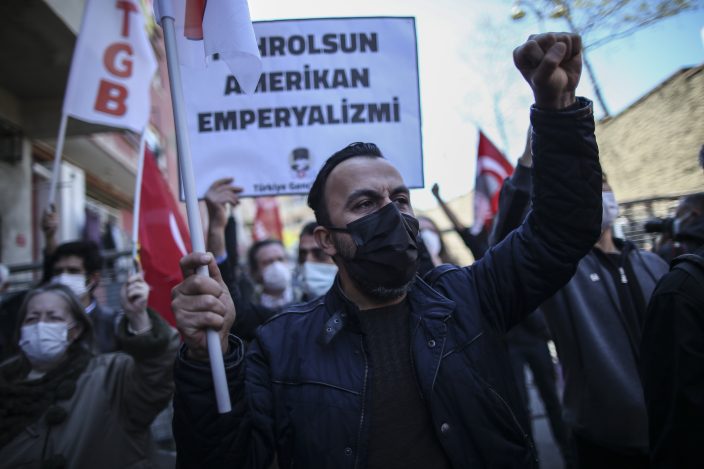 FILE - In this April 26, 2021, file photo, supporters of the Turkey Youth Union chant slogans during a protest outside the U.S. consulate, in Istanbul, against U.S. President Joe Biden's statement after he recognized the events that began in 1915 and killed an estimated 1.5 million Ottoman Armenians as genocide. (AP PhotoEmrah Gurel, File)

“The most important thing for the Turkish leader at this time is to give a veneer of positive relations with the U.S. in terms of Turkey’s image,” said Merve Tahiroglu, Turkey Program Coordinator at the Project on Middle East Democracy. “He seems to understand that to get any kind of international investment to Turkey, he will need to project an image of positive relations with the U.S.”

Biden has often touted the personal relationships he’s developed with world leaders over nearly 50 years as a factor that makes him uniquely equipped to revitalize the reputation of the United States following the presidency of Donald Trump.

In recent days, he’s mentioned to aides that he’s developed a strong rapport with Erdogan over the years, according to a senior administration official who spoke on the condition of anonymity to discuss private conversations. 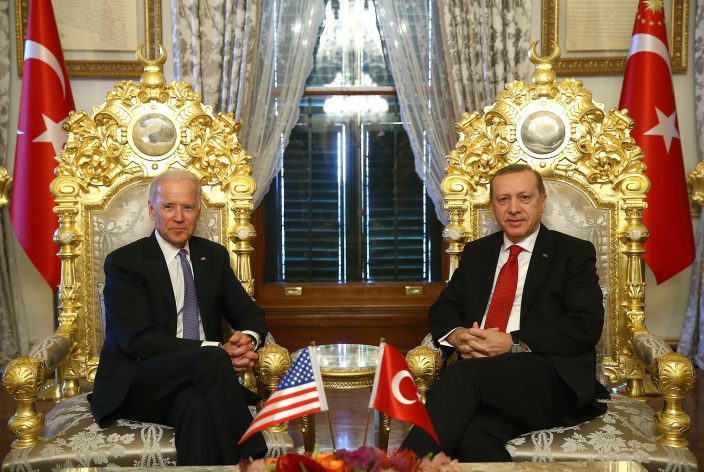 FILE - In this Jan. 23, 2016, file photo, U.S. Vice President Joe Biden, left, poses for photographers with Turkish President Recep Tayyip Erdogan, right, prior to their meeting at Yildiz Mabeyn Palace in Istanbul. Biden and Turkish counterpart Erdogan have known each other for years, but their meeting Monday, June 14, 2021, will be their first as heads of state. And it comes at a particularly tense moment for relations between their two countries. (Kayhan OzerPresidential Press Service, Pool via AP, File)

Biden still fondly recalls making a house call to Erdogan in 2011 when he was in Turkey to speak at the Global Entrepreneurs Summit, according to the official. Erdogan did not attend because he was recovering from major surgery, but Biden stopped by to check in on him. Their conversation was supposed to be brief but lasted over two hours.

Still, the relationship has been complicated at times. In 2014, while vice president, Biden apologized to Erdogan after suggesting in a speech that Turkey helped facilitate the rise of the Islamic State militant group by allowing foreign fighters to cross Turkey’s border with Syria. During the 2020 presidential campaign, Biden drew ire from Turkish officials after an interview with The New York Times in which he called Erdogan an “autocrat.”

Erdogan enjoyed collegial relations with Trump, who didn't give him a hard time about Turkey's human rights record and agreed to withdraw U.S. troops from northern Syria in 2019, paving the way for a Turkish military offensive against Syrian Kurdish fighters who had fought alongside U.S. forces against IS militants. Biden was strongly critical of that decision, accusing Trump of selling out U.S. allies. 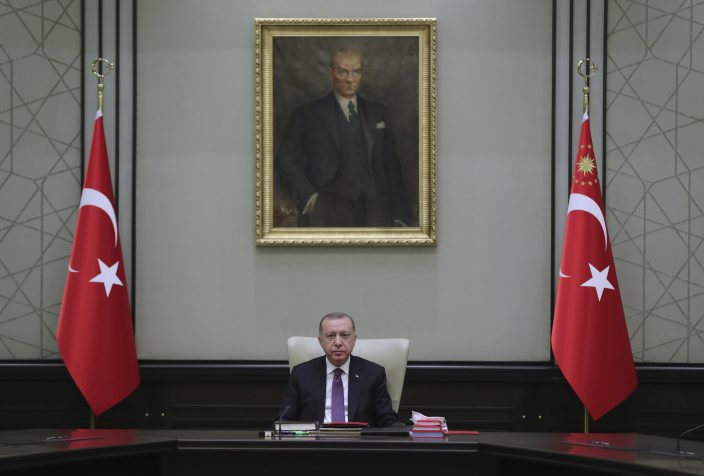 FILE - In this April 26, 2021, file photo, Turkey's President Recep Tayyip Erdogan, backdropped by a painting depicting modern Turkey's founder Mustafa Kemal Ataturk, chairs his government's cabinet in Ankara, Turkey. President Joe Biden and Turkish counterpart Erdogan have known each other for years, but their meeting Monday, June 14, 2021, will be their first as heads of state. And it comes at a particularly tense moment for relations between their two countries. (Turkish Presidency via AP, File)

Erdogan waited several days before congratulating Biden on his election victory as Trump challenged the results. At the same time, Erdogan sent a message to Trump thanking him for his “warm friendship.”

After taking office, Biden waited three months before giving Erdogan a call, which was widely seen in Turkey as a snub. The first time they spoke after the election was when Biden called to tell Erdogan about the Armenian “genocide” announcement.

In an interview with Turkish state broadcaster TRT on June 1, Erdogan noted he had cordial relations with previous U.S. presidents, particularly Trump, and that he would ask Biden on the sidelines of the NATO meeting in Brussels “why Turkey-U.S. relations are in such a state of tension.” 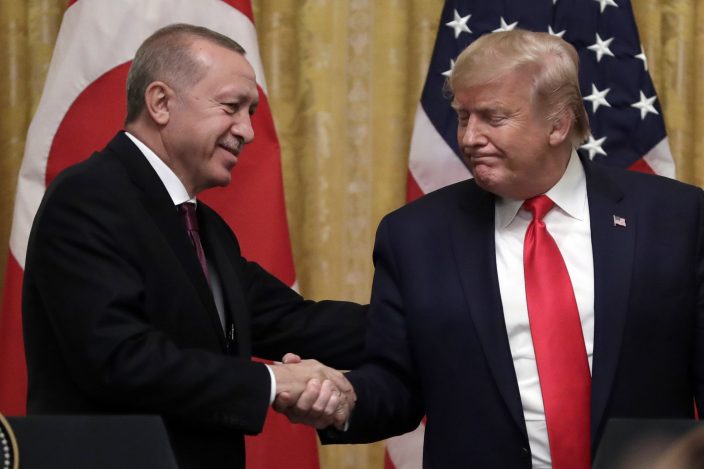 FILE - In this Nov. 13, 2019, file photo, President Donald Trump shakes hands with Turkish President Recep Tayyip Erdogan after a news conference in the East Room of the White House, in Washington. President Joe Biden has often touted the personal relationships he’s developed with world leaders over nearly 50 years in national politics as a factor that makes him uniquely equipped to revitalize the reputation of the United States following the presidency of Trump. He’s mentioned to aides that he’s developed a strong rapport with Erdogan over the years, according to a senior administration official who spoke on the condition of anonymity to discuss private conversations. (AP Photo Evan Vucci, File)

They are expected to take up Turkey’s purchase of the S-400 advanced Russian defense systems that angered Washington and resulted in Ankara being kicked out of the U.S. F-35 fighter aircraft production program, sanctions on senior Turkish defense industry officials, and bans on military export licenses. Washington says the system is a threat to NATO security and insists that sanctions cannot be lifted until Turkey gets rid of the system, which has cost the country $2.5 billion.

Turkey repeatedly has called for dialogue to resolve the issue. Turkish media reports say Turkey is set to propose the deployment of the S-400s at Incirlik air base, which is home to a U.S. Air Force wing, where they would be watched by U.S. military officials. Foreign Minister Mevlut Cavusoglu told reporters the S-400s would be “100% under (Turkish) control” and that no Russian military official would be in Turkey.

Erdogan is also expected to raise the issue of U.S. military support for Syrian Kurdish fighters, who Ankara argues are inextricably linked to a decades-long Kurdish insurgency in Turkey.

National security adviser Jake Sullivan said Biden and Erdogan will discuss Syria and Iran as well as what role Turkey can play on Afghanistan following the U.S. troop withdrawal. Also on the agenda is how Washington and Ankara "deal with some of our significant differences on values and human rights and other issues,” Sullivan said.

“The two men have spent a good amount of time together, and they are both, I think, looking forward to the opportunity to really have a business-like opportunity to review the full breadth of their relationship,” Sullivan said.