The Group of Seven leaders aim to end their first summit in two years with a punchy set of promises Sunday, including vaccinating the world against coronavirus, making huge corporations pay their fair share of taxes and tackling climate change with a blend of technology and money.

They want to show that international cooperation is back after the upheavals caused both by the pandemic and the unpredictability of former U.S. President Donald Trump. And they want to convey that the club of wealthy democracies — Canada, France, Germany, Italy, Japan, the United Kingdom and the United States — is a better friend to poorer nations than authoritarian rivals such as China.

But it was uncertain how firm the group’s commitments will be on coronavirus vaccines, the economy and the environment when the leaders issue their final communique. Also unclear was whether all of the leaders would back the United States’ call to chastise China for repressing its Uyghur minority and other abuses. 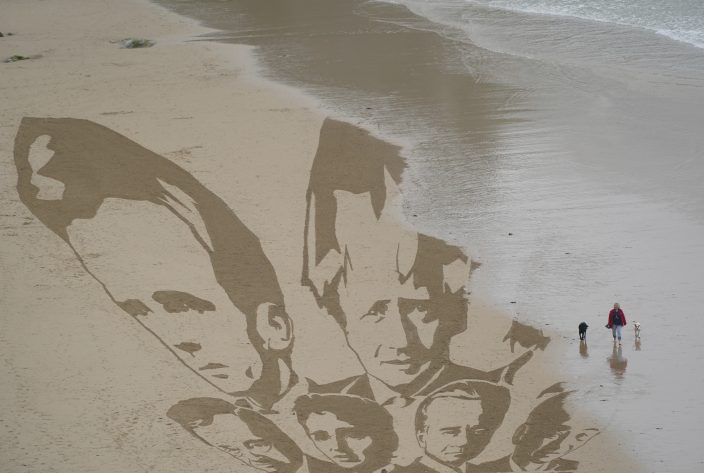 A woman walks her dogs as the incoming tide begins to wash away the heads of G7 leaders drawn in the sand by activists on the beach at Newquay, Cornwall, England, Thursday, June 10, 2021. G7 leaders and guests will meet in the the Cornish resort of Carbis Bay, St. Ives, starting Friday, June 11, 2021. (AP PhotoJon Super)

U.K. Prime Minister Boris Johnson, the summit's host, wanted the three-day meeting to fly the flag for a “Global Britain,” his government's initiative to give the midsized country outsized influence when it comes to global problem-solving.

Brexit cast a shadow over that goal during the summit on the coast of southwest England. European Union leaders and U.S. President Joe Biden voiced concerns about problems with new U.K.-EU trade rules that have heightened tensions in Northern Ireland.

But overall, the mood has been positive: The leaders smiled for the cameras on the beach at cliff-fringed Carbis Bay, a village and resort that became a traffic-clogged fortress for the meeting. The last G-7 summit was in France in 2019. The pandemic scuttled the planned 2020 event in the United States. 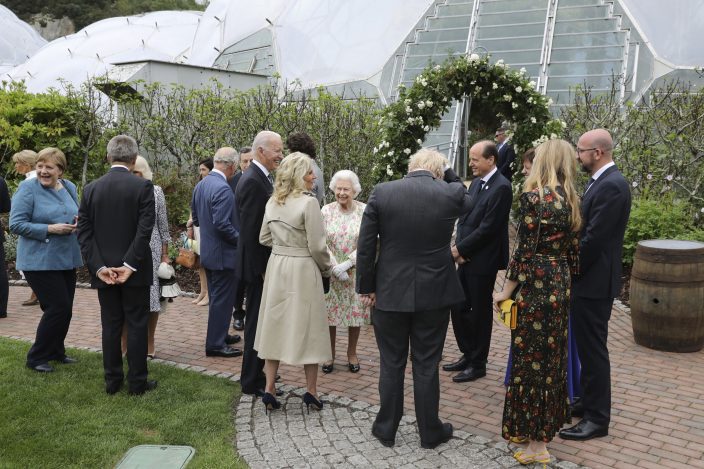 Britain's Queen Elizabeth II speaks to US President Joe Biden and his wife Jill Biden during a reception with the G7 leaders at the Eden Project in Cornwall, England, Friday June 11, 2021, during the G7 summit. (Jack HillPool via AP)

The leaders mingled with Queen Elizabeth II at a royal reception on their first evening, and were served steak and lobster at a beach barbecue on their second.

America’s allies were visibly relieved to have the U.S. back as an engaged international player after the “America First” policy of the Trump administration.

“The United States is back, and democracies of the world are standing together,” Biden said as he arrived in the U.K. on the first foreign trip of his 5-month-old presidency. After the G-7 summit, the president is to have tea with the queen on Sunday, attend a NATO summit in Brussels on Monday and hold talks with Russian leader Vladimir Putin in Geneva on Wednesday. 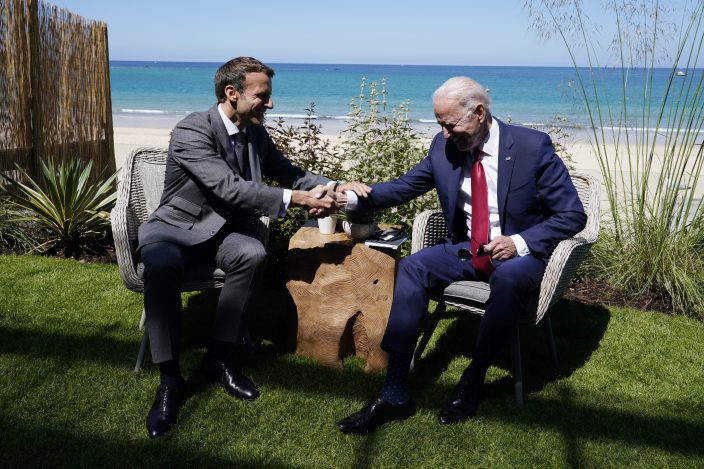 At the G-7, Johnson described Biden as a “breath of fresh air.” French President Emmanuel Macron, after speaking one-to-one with Biden, said, “It’s great to have a U.S. president part of the club and very willing to cooperate.”

The re-energized G-7 made ambitious declarations during their meetings about girls’ education, preventing future pandemics and using the finance system to fund green growth. Above all, they vowed to share vaccine doses with less well-off nations that urgently need them. Johnson said the group would pledge at least 1 billion doses, with half that coming from the United States and 100 million from Britain.

World Health Organization Director-General Tedros Adhanom Ghebreyesus commended the vaccine pledge but said it's not enough. To truly end the pandemic, he said, 11 billion doses are needed to vaccinate at least 70% of the world's population by the middle of next year. 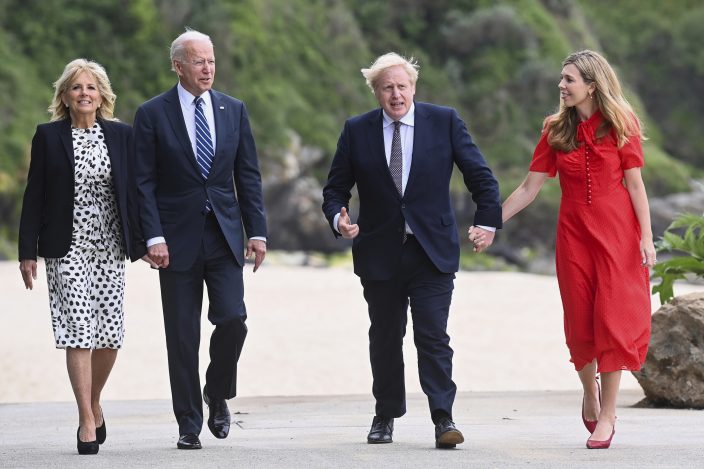 “We need more and we need them faster,” Tedros said.

Public health advocates said much more than just doses was needed, including money and logistical help to get shots into the arms of people in poorer countries.

“It’s not enough to just get vaccines flown into capitals,” said Lily Caprani, head of COVID-19 vaccines advocacy for UNICEF. “We can’t let them potentially go to waste or be at risk or be at risk of not being delivered. So it’s a real end-to-end solution that’s needed.” 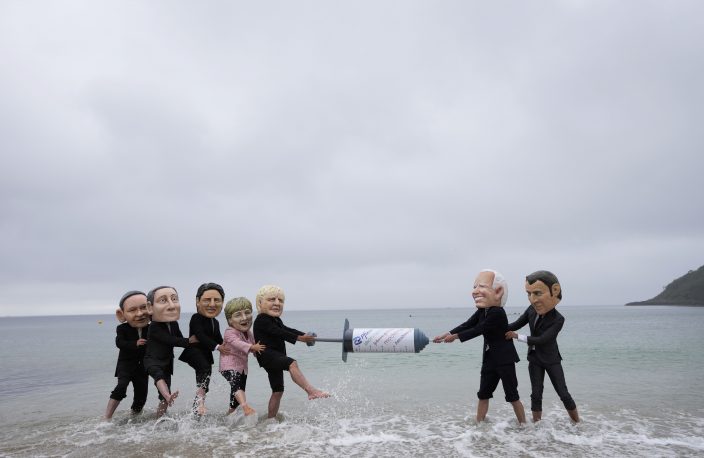 The leaders' final communique is expected to formally embrace placing a global minimum tax of at least 15% on large multinational companies to stop corporations from using tax havens to shift profits and to avoid taxes.

The minimum rate was championed by the U.S., and dovetails with the aim of Biden — and Johnson — to focus the summit on ways the democracies can collaborate to build a more inclusive and fair global economy and to compete with rising autocracies like China.

Non-G-7 nations India, South Korea, Australia and South Africa were invited to attend as guests to bolster the group’s support for fellow democracies. 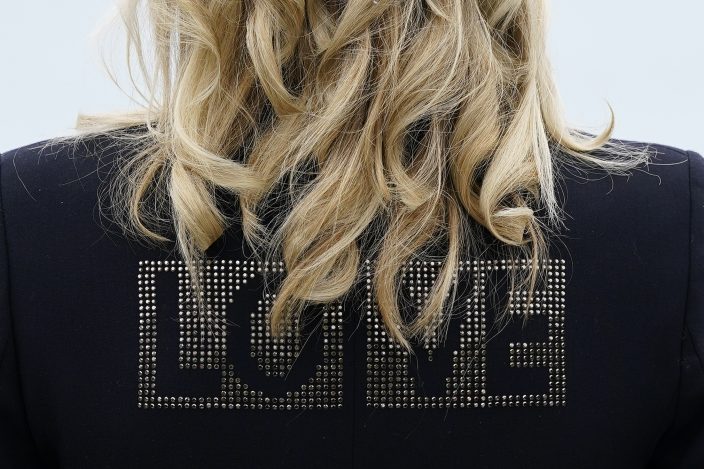 First lady Jill Biden turns around to show the word "love" on the back of her jacket as she speaks with reporters after visiting with Carrie Johnson, wife of British Prime Minister Boris Johnson, ahead of the G-7 summit, Thursday, June 10, 2021, in Carbis Bay, England. (AP PhotoPatrick Semansky)

The White House said the leaders had also agreed an infrastructure plan, the Build Back Better world plan, to help low and middle-income countries. The move is a response to China’s “belt and road” initiative, which has increased Beijing’s influence in countries around the world.

White House officials said Biden wants the G-7 leaders to speak in a single voice against the forced labor practices targeting China’s Uyghur Muslims and other ethnic minorities. Biden hopes the denunciation will be part of a joint statement Sunday, but some European allies are reluctant to split so forcefully with Beijing.

The summit was also supposed to focus on climate change and to set the stage for the U.N. climate conference being held in November in Scotland. British Prime Minister Boris Johnson speaks with his wife Carrie during arrivals for the G7 meeting at the Carbis Bay Hotel in Carbis Bay, St. Ives, Cornwall, England, Saturday, June 12, 2021. Leaders of the G7 gather for a second day of meetings on Saturday, in which they will discuss COVID-19, climate, foreign policy and the economy. (AP PhotoKirsty Wigglesworth, Pool)

Climate activists and analysts have said filling a $100 billion annual fund that is intended to help poor countries tackle the effects of global warming should be at the top of the G-7's to-do list.

Johnson’s office said he met with U.N. Secretary General Antonio Guterres on Saturday and that the two agreed on the need for countries to step up and make ambitious commitments to cut carbon emissions and phase out the use of coal.

But very little substance on the topic has so far emerged from the talks, to the frustration of environmental protesters who gathered nearby to make their message heard. 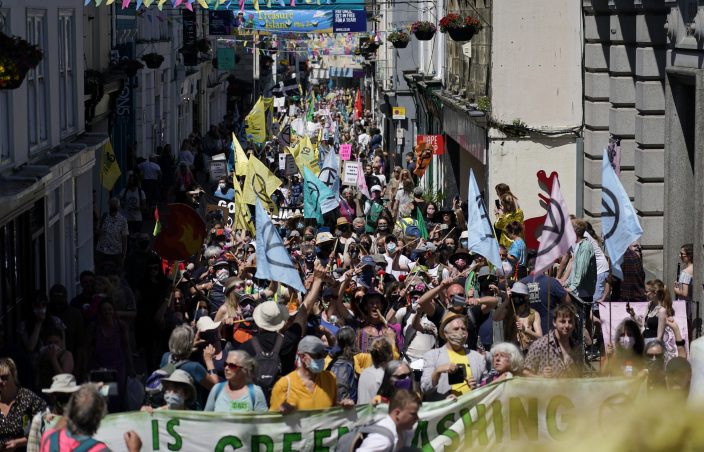 Activists march through the streets in during a demonstration around the meeting of the G7 in Falmouth, Cornwall, England, Saturday, June 12, 2021. Leaders of the G7 gather for a second day of meetings on Saturday, in which they will discuss COVID-19, climate, foreign policy and the economy. (AP PhotoAlberto Pezzali)

Large crowds of surfers and kayakers took to the sea in a mass paddle protest Saturday to urge more action on protecting the oceans, while thousands chanted and beat drums as they marched outside the summit’s media center in Falmouth.

“G-7 is all greenwashing,” the protesters sang. “We’re drowning in promises, now’s the time to act.”

Follow all AP stories on climate change issues at https://apnews.com/hub/Climate. 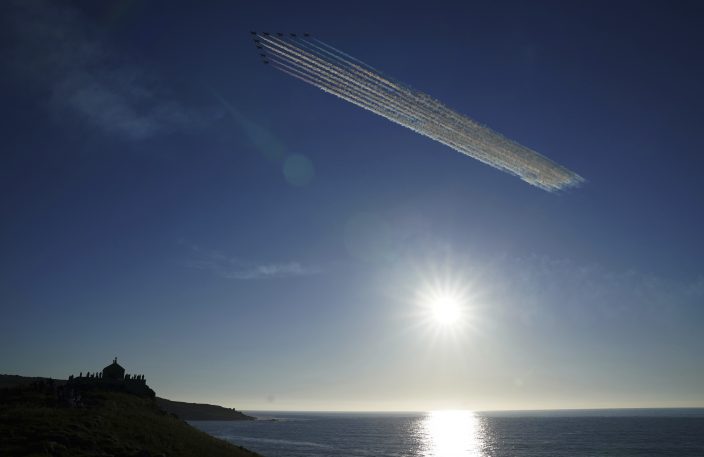 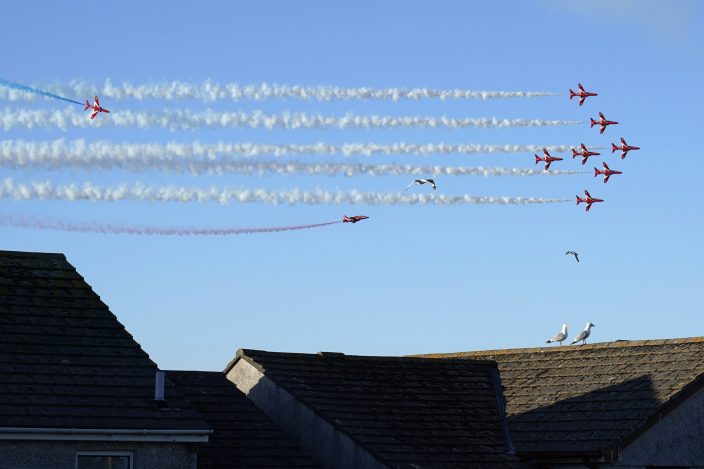 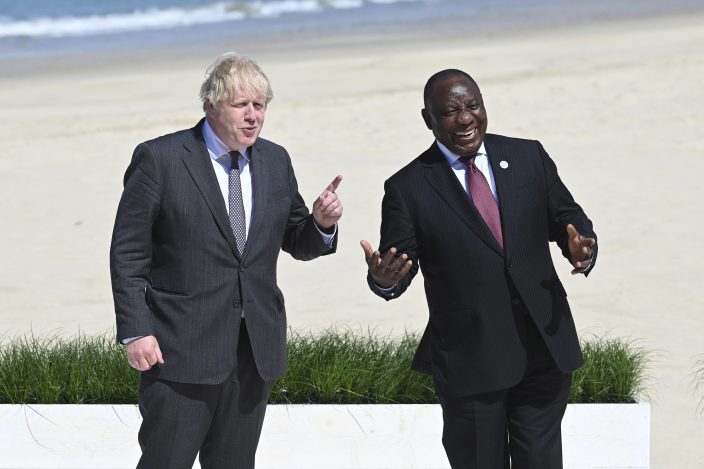 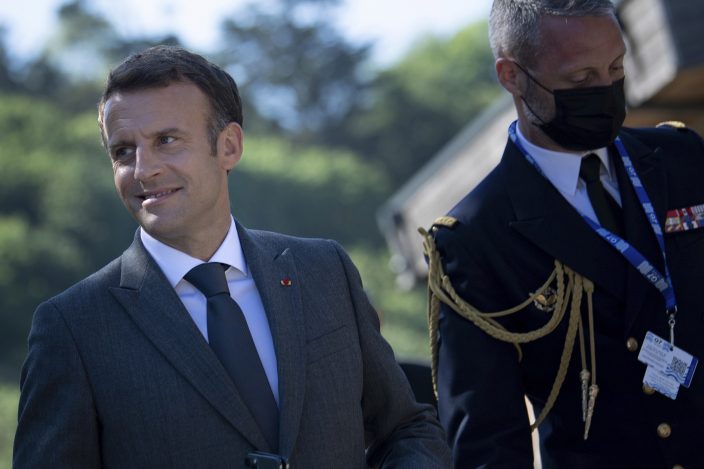 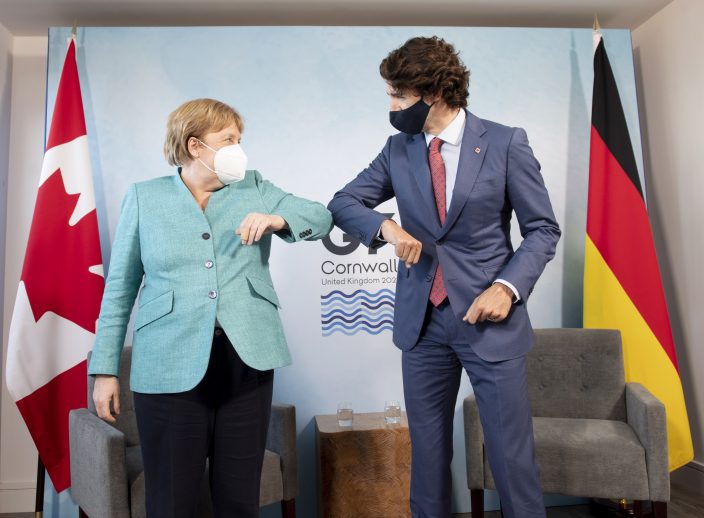 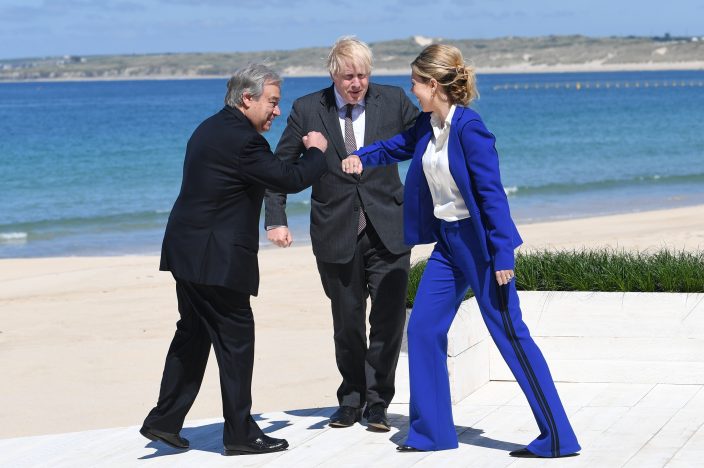 British Prime Minister Boris Johnson and his wife Carrie greet United Nations Secretary General Antonio Guterres, left, during arrivals for the G7 meeting in Carbis Bay, St. Ives, Cornwall, England, Saturday, June 12, 2021. Leaders of the G7 gathered for a second day of meetings on Saturday, in which they will discuss COVID-19, climate, foreign policy and the economy. (Stefan RousseauPool via AP)