The government of Nicaraguan President Daniel Ortega has arrested an opposition leader and police surrounded the home of another on Sunday.

The moves over the weekend suggest Ortega has moved beyond arresting potential opposition candidates in the Nov. 7 elections, and has begun arresting any prominent member of the opposition.

“It's not just potential candidates any more, it's political leaders,” said former general and Sandinista dissident Hugo Torres. “This is not a transition to dictatorship, it is a dictatorship in every way.” 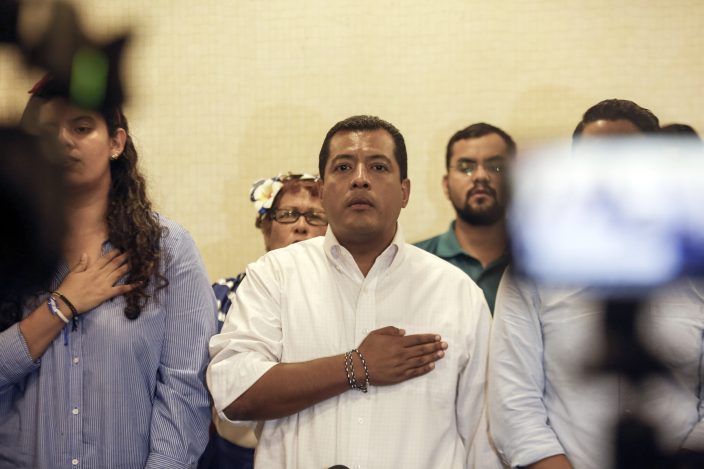 FILE - In this Sept. 18, 2019 file photo, Nicaraguan opposition activist Felix Maradiaga, center, stands at attention as the national anthem is sung during a press conference in Managua, Nicaragua. Nicaragua’s National Police has on Tuesday, June 8, 2021, arrested Maradiaga, a potential challenger to President Daniel Ortega, the third opposition pre-candidate for the Nov. 7 elections detained in the past week. (AP PhotoAlfredo Zuniga, File)

On Saturday, police arrested Tamara Dávila, who was active in Unamos, a movement formed by former Sandinistas angered by Ortega’s autocratic ways, nepotism and perpetual re-elections.

Police said they arrested Dávila on charges related to a recently enacted law that classifies as treason any support for sanctions against officials in the Ortega regime; the U.S. has slapped sanctions on dozens of officials.

Davila is also a central figure in the opposition coalition Blue and White Nationality Unity, which was formed following Ortega's repression of mass protests in 2018.

On Sunday, police surrounded the home of another prominent ex-Sandinista dissident, Dora María Téllez. Drones were seen flying over the property, where another opposition leader, Ana Margarita Vijil, is also staying.

Any arrest of Tellez would be a major step: she was a leading Sandinista militant who led an assault on the National Palace in 1978, taking Somoza’s congress hostage. Like many former guerrillas, she later split with Ortega.

Ortega has already arrested four potential opposition candidates who might have challenged his bid for a fourth consecutive term, and now many Nicaragua opposition leaders fear it is only a matter of time until police come for them, too.

Torres said he has seen drones flying around his home in recent days, of the type used at Tellez's house.

“This interview may be the last one I give,” Torres said. “I am here, waiting for them to come for me.”

The previous week authorities detained Cristiana Chamorro, a cousin of Juan Sebastián Chamorro, and Arturo Cruz Sequeira, a former ambassador to the United States who was arrested Saturday under a controversial “treason” law passed in December.

Ortega initially led Nicaragua from 1979 to 1990 following the Sandinista revolution that ousted the dictator Anastasio Somoza. He returned to the presidency in 2007 after three failed election attempts, and he won reelection in 2011. He then sidestepped term limits to get himself reelected in 2016, and packed courts and government agencies with allies. The Sandinista party controls the courts and the legislature, and has stifled universities and the Roman Catholic church.

Torres said Ortega has now instituted a more suffocating dictatorship than Somoza, who faced opposition from the within the church, intellectual circles and universities.

“I think Ortega has outdone Somoza,” said Torres. “He has subordinated all the power to himself as Somoza never could. He has a bigger repressive apparatus than Somoza ever had.”

Julie Chung, the U.S. State Department’s acting assistant secretary for Western Hemisphere affairs, said via Twitter recently that the arrests “confirm without a doubt that Ortega is a dictator. The international community has no choice but to treat him as such.”

Official: US told Nicaragua it would respect free elections

Nicaragua detains yet another opposition politician

US calls on Nicaragua to free opposition figure Chamorro