A LOOK AT SUNDAY

The French Open wrapped up with Novak Djokovic coming back from a two-set deficit to beat Stefanos Tsitsipas 6-7 (6), 2-6, 6-3, 6-2, 6-4 in the men's singles final. That gave Djokovic his second title at Roland Garros and 19th Grand Slam trophy overall, just one away from tying his rivals Roger Federer and Rafael Nadal for the most by a man in tennis history. Djokovic also won the Australian Open in February and so is halfway to a calendar-year Grand Slam. Wimbledon begins in two weeks. In the women's doubles final, singles champion Barbora Krejcikova and her partner, Katerina Siniakova, beat 2020 singles champion Iga Swiatek and Bethanie Mattek-Sands 6-4, 6-2 for their third Grand Slam doubles title as a pair. Krejcikova is the first woman since Mary Pierce in 2000 to sweep the singles and doubles trophies at Roland Garros. 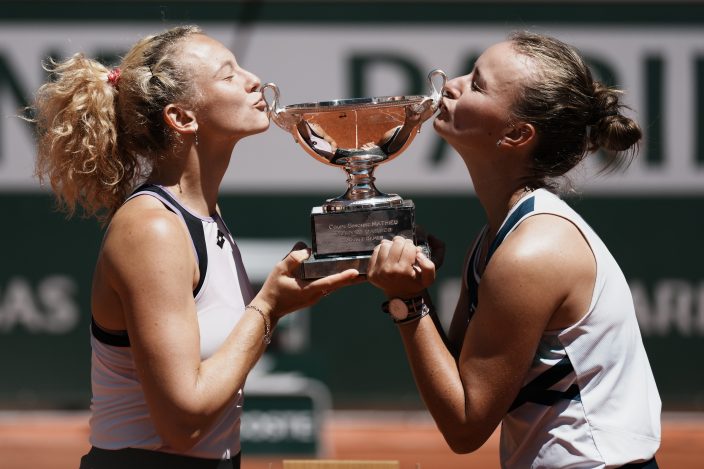 Women’s Doubles Final: No. 2 Barbora Krejcikova and Katerina Siniakova of the Czech Republic beat No. 14 Bethanie Mattek-Sands of the United States and Iga Swiatek of Poland 6-4, 6-2.

Zero — Number of times a man had won a Grand Slam title in the professional era, which began in 1968, after winning two matches in which he trailed two sets to none, until Djokovic did it at the 2021 French Open.