Austin Riley homered and drove in three runs, Drew Smyly allowed two runs over five innings on his 32nd birthday and the Atlanta Braves snapped a four-game slide by beating the Miami Marlins 6-4 on Sunday.

Riley reached base five times, going 3 for 3 with a walk and getting hit by a pitch. Ender Inciarte also homered for Atlanta, his solo shot coming one inning after he entered the game as an injury replacement for Ronald Acuña Jr., who departed with what the Braves said was right pectoral soreness.

Starling Marte drove in three runs for the Marlins, who were bidding for their first sweep of Atlanta since 2016. Right-hander Pablo López (2-4) went only three innings, giving up four runs and six hits and seeing his ERA rise from 2.76 to 3.12. 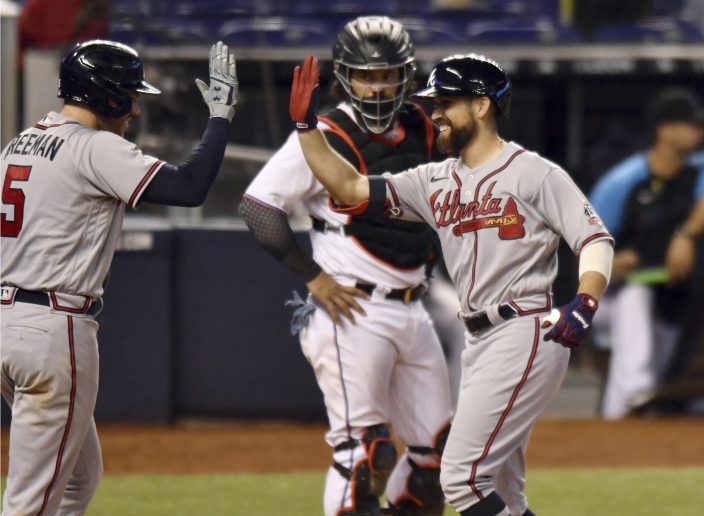 Smyly (3-3) almost got his first career RBI, in his 43rd plate appearance. He lofted a liner to center with one out in the fifth; Marte caught it, then fired home — and even after an awkward skip off the grass, Miami catcher Jorge Alfaro handed the throw and tagged out Ehire Adrianza to end the inning.

Adrianza made up for that a half-inning later.

The Marlins got two runs in the fifth off Smyly, with Marte getting an RBI single and later scoring on a wild pitch. But Smyly escaped the inning and became eligible for the birthday win when Adrianza fielded a high chopper off the bat of Miami’s Corey Dickerson and flipped it from his glove to first in time for the third out. 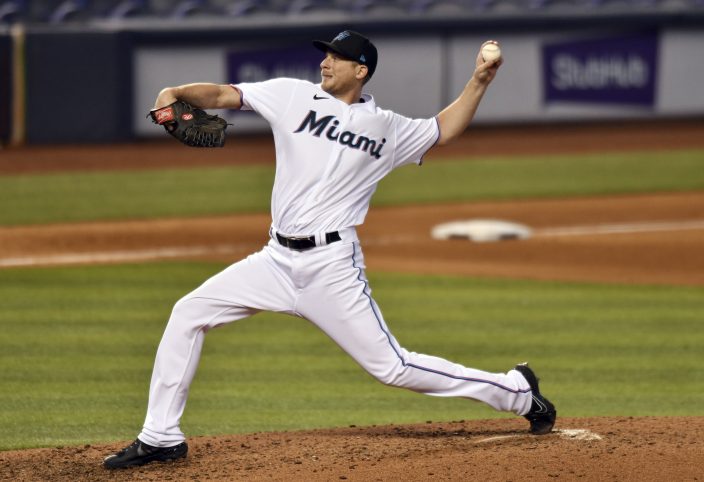 Miami got a two-run single from Marte in the seventh, and he kept the Marlins within two runs with a sensational running grab to save a run and retire Kevan Smith to end the Atlanta ninth.

But Will Smith retired the Marlins in the ninth in order, getting his 12th save and ending a three-hour, 46-minute contest.

The Braves had a total of three first-inning runs in their last 10 games. They got three on Sunday alone; Acuña Jr. extended the longest active on-base streak in the majors to 22 games with a bloop single to left to open the game, and Riley had the big hit with a two-run single. 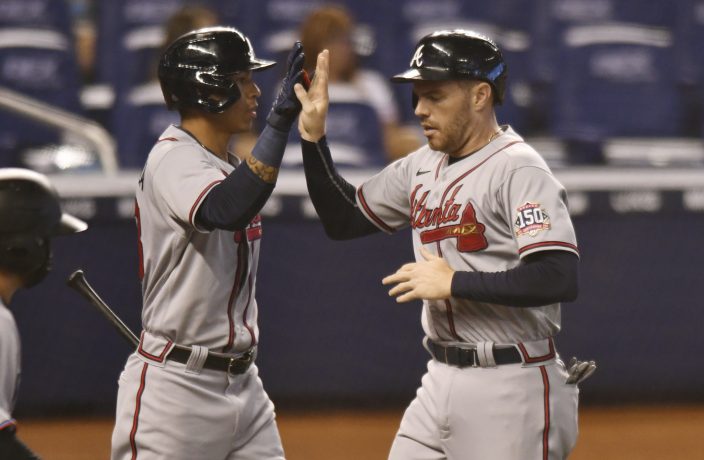 Atlanta Braves' Freddie Freeman, right, is congratulated by teammate Ehire Adrianza after scoring a run in the first inning of a baseball game against the Miami Marlins, Sunday, June 13, 2021, in Miami. (AP PhotoJim Rassol)

It was López’s 14th start of the season. Against anyone other than Atlanta in the first inning, his ERA is 0.75. In two starts against the Braves, his first-inning ERA: 27.00, after giving up three runs each time.

Braves: SS Dansby Swanson, who had been Atlanta’s only player to start each of the season’s first 62 games, wasn’t in the lineup — then entered as a pinch-hitter in the eighth inning. ... OF Guillermo Heredia got his fingers pinned between the ball and his bat as he tried to bunt in the eighth inning. 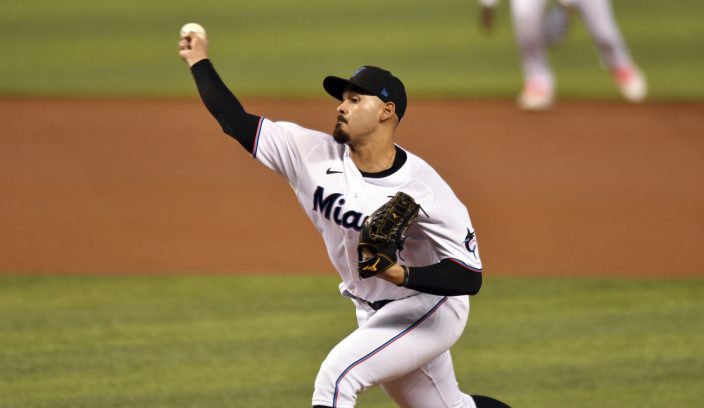 Marlins: The Marlins activated LHP Trevor Rogers (7-3, 2.02) from the 10-day injured list, only one day after putting him on that list -- the indicator being a coronavirus-related concern. RHP Preston Guilmet, whose contract was selected so he could take Rogers’ spot for a day, was designated for assignment. Rogers pitches Tuesday in St. Louis. ... INF Jose Devers left Sunday with right shoulder discomfort.

It was the 51st time in Braves history that their starting pitcher was celebrating a birthday. The Braves are now 25-26 in those games, which include a loss on Ian Anderson’s 23rd birthday — a 7-2 defeat by Toronto on May 2. 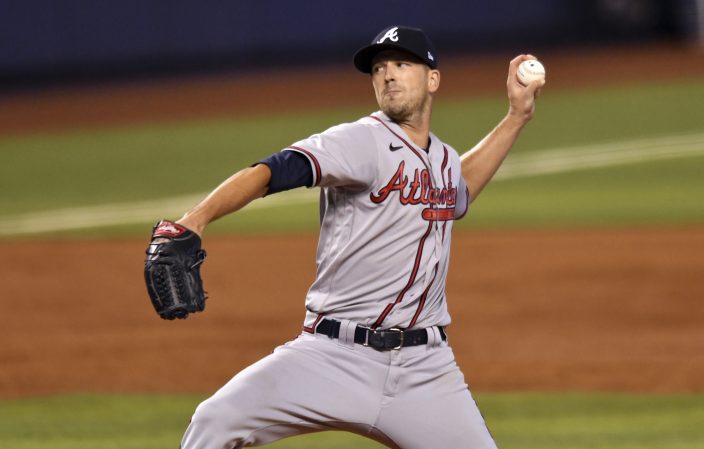 Smyly is the fifth pitcher to start on his birthday this season in the majors. Anderson and Pittsburgh’s Mitch Keller took losses; Houston’s Jose Urquidy and Milwaukee’s Freddy Peralta got wins.

In games where it led at any point by at least three runs, Atlanta started 1-3. The Braves are 22-2 in those games since. 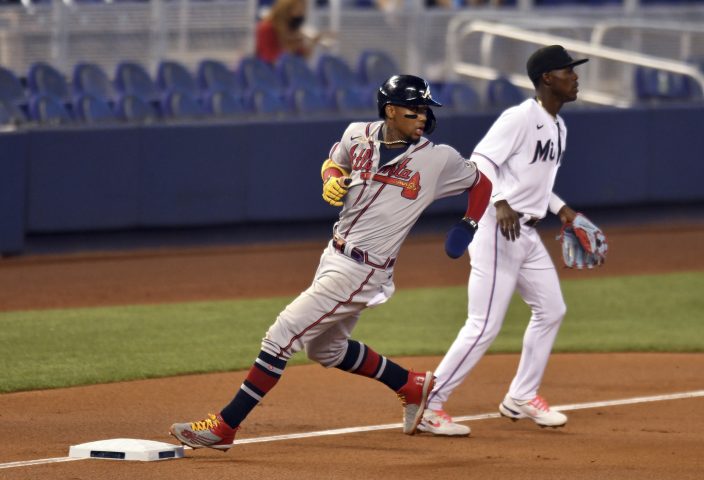 Braves: Off Monday, then play host to the Boston Red Sox on Tuesday in the opener of a two-game series. LHP Tucker Davidson (0-0, 1.53) starts for Atlanta.

Another 1-run loss for Braves: Alcantara and Marlins win 4-3