A look at what's happening around the majors Monday:

Vladimir Guerrero Jr. and the bashing Blue Jays try to keep up their power surge at Fenway Park.

Teoscar Hernández hit a pair of three-run shots over the Green Monster as Toronto hit eight home runs — the most ever allowed in a game by the Red Sox — in an 18-4 romp Sunday. 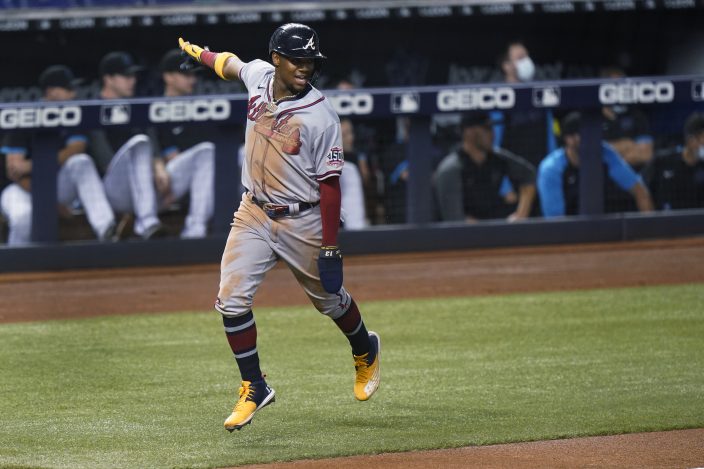 Atlanta Braves' Ronald Acuna Jr. celebrates as he scores on a double by Ozzie Albies during the third inning of the team's baseball game against the Miami Marlins, Friday, June 11, 2021, in Miami. (AP PhotoWilfredo Lee)

The Blue Jays have hit 13 homers the past two days in Boston, with nine of them clearing the Monster.

Marcus Semien, meanwhile, stretched his road hitting streak to 26 games, best in the majors since Dexter Fowler hit safely in 27 straight road games for the Cubs from September 2015 to May 2016. 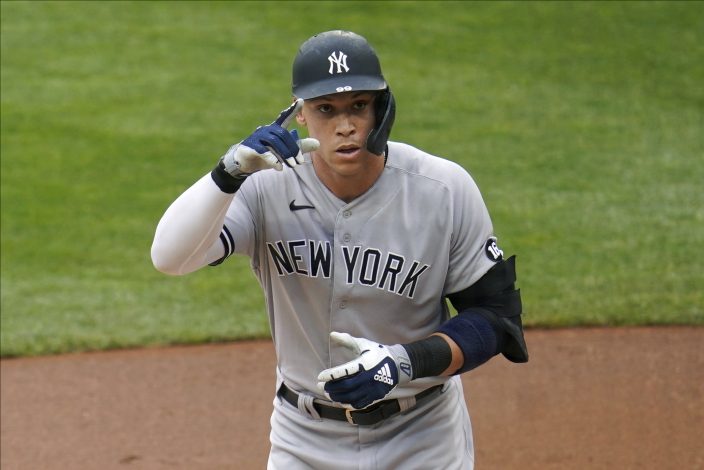 The teams with the best two records in the majors meet in Chicago when the Rays take on the White Sox in a three-game set.

“It should be a very fun series,” Rays manager Kevin Cash said. “They’re a talented team. You kind of saw it coming over the last couple seasons. You saw the youth that they had, and now those guys have evolved. They added some big pieces. Their pitching has been tremendous.”

Braves outfielder Ronald Acuña Jr. gets a break, a day after he exited a 6-4 win in Miami with what the team said was right pectoral soreness.

“I don’t see this being lingering,” manager Brian Snitker said.

The Braves are off until starting a series at home against Boston on Tuesday night.

Yankees slugger Aaron Judge is having back spasms, the latest setback in a career filled with impressive feats and frequent injuries.

Judge didn't play Sunday in a 7-0 loss at Philadelphia. Manager Aaron Boone said postgame that Judge was unavailable even for pinch-hitting duties and will undergo off-day treatment on Monday.

New York has lost seven of nine and is fourth in the AL East, only one game over .500

Baltimore has dropped 15 road games in a row, extending its worst slide since the St. Louis Browns moved to Maryland in 1954 and became the Orioles.

The Orioles were swept for the seventh time this season with their latest loss at Tampa Bay and have an AL-worst record of 22-42.

“We have to keep playing, keep our heads up,” Baltimore shortstop Freddy Galvis said. “That’s it, man.”

Orioles manager Brandon Hyde said a pitcher probably will be called up from Triple-A Norfolk to start at Cleveland.