Jae Crowder received all sorts of quizzical text messages for his decision to sign with the Phoenix Suns in the offseason.

What was he thinking? The Suns hadn't been to the playoffs in a decade. The West was stacked.

“I look like a genius, huh?” cracked Crowder, who took his talents to the Suns after helping Miami reach the NBA Finals last season. “I knew the type of group these guys were. I felt like they were hungry. They wanted to do some special things and I wanted to be a part of it.” 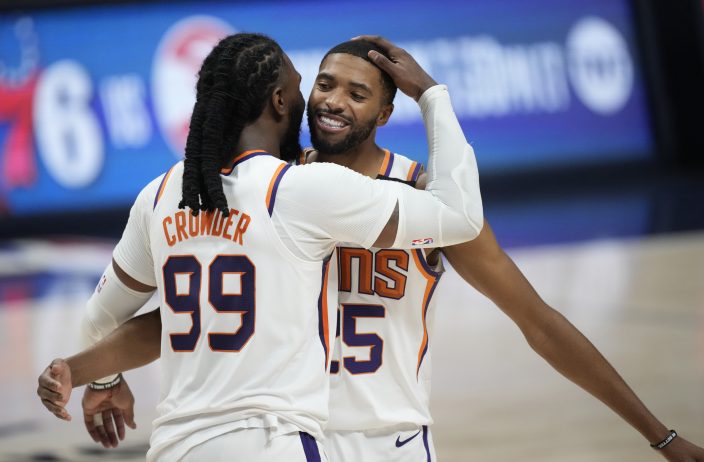 Phoenix Suns forward Jae Crowder, left, hugs forward Mikal Bridges as time runs out in the second half of Game 4 of an NBA second-round playoff series against the Denver Nuggets, Sunday, June 13, 2021, in Denver. Phoenix won 125-118 to sweep the series. (AP PhotoDavid Zalubowski)

Behind the brilliant backcourt of Chris Paul and Devin Booker and steady contributions from the likes of Crowder, the Suns are roaring into the Western Conference Finals for the first time since 2010, the last year they reached the postseason.

The Suns completed a four-game sweep of the short-handed Denver Nuggets with a 125-118 win Sunday night in a testy game in which MVP Nikola Jokic was ejected in the third quarter for a flagrant foul on Cameron Payne.

It was the seventh straight win for Phoenix — the longest playoff winning streak in team history. 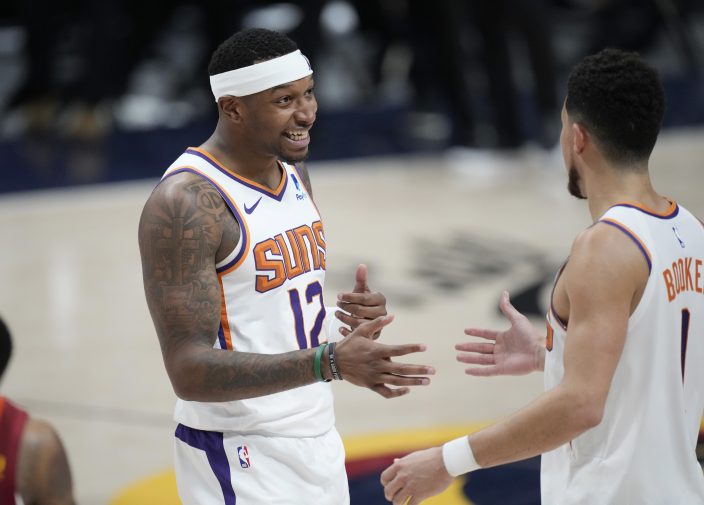 Phoenix Suns forward Torrey Craig, left, congratulates guard Devin Booker as time runs out in the second half of Game 4 of an NBA second-round playoff series against the Denver Nuggets, Sunday, June 13, 2021, in Denver. Phoenix won 125-118 to sweep the series. (AP PhotoDavid Zalubowski)

After bouncing LeBron James and the defending champion Lakers in six games during the first round, the Suns made even quicker work of Jokic and the Nuggets.

Now, they get to rest up before playing either top-seeded Utah or the Los Angeles Clippers. The Jazz lead that series 2-1 heading into Game 4 on Monday night in Los Angeles. Phoenix was 1-2 against the Clippers in the regular season and 3-0 against the Jazz.

“Everybody at this point is banged up and can use that kind of recovery,” Phoenix coach Monty William said. "We earned it and we want to take advantage of it. 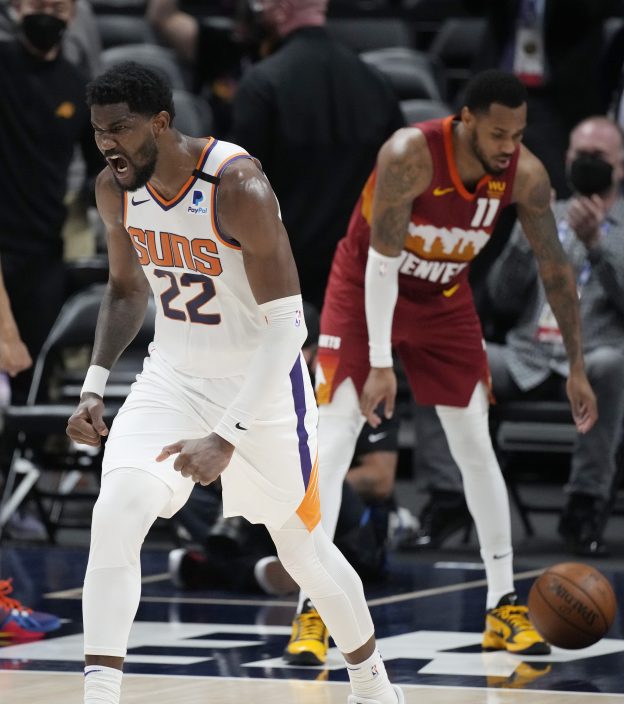 Phoenix Suns center Deandre Ayton reacts after dunking the ball in the second half of Game 4 of an NBA second-round playoff series against the Denver Nuggets, Sunday, June 13, 2021, in Denver. Phoenix won 125-118 to sweep the series. (AP PhotoDavid Zalubowski)

“But right now, I'm not even thinking about that. I’m just happy about what these guys have accomplished."

“Very impressive how locked in we are as a unit,” Crowder said. “We have great leadership. We have great coaching putting us in a position to succeed right now.

"I definitely feel like we’re connected as a group and it shows.”

Right after the final horn, Paul and Booker — who combined for 71 points — made their way through the post-series handshakes and hugs near the Nuggets logo.

Waiting on the side was Williams. He shared a heartfelt embrace with each one.

Williams is tight with Paul, from their coach/guard time together in New Orleans. They have a strong bond away from the court, too, and Paul was there for Williams when Williams lost his wife from injuries in a car accident in 2016.

“Monty has been through things in his life that a lot of people don’t necessarily come back from,” said Paul, who scored 13 of his 37 points in the fourth quarter. "Basketball aside, he means so much to me and my family. So to be on this journey with him and to see it paying off is nice. We’re a lot alike. We stay locked in. I don’t feel good until the buzzer sounds. Monty’s the same way. When the series is over, and the game is over, it’s nice to share those moments.”

The last time the Suns were this far was 2010 behind a cast that included the likes of Amar’e Stoudemire, Steve Nash, Jason Richardson and Grant Hill. They fell to Kobe Bryant and the Los Angeles Lakers 4-2.

“The emotions are happy, grateful, tired, relieved," Williams said of advancing to the conference finals. “It’s one of those moments for me that quite frankly I never thought I’d have a chance to experience. For me, I have a level of gratitude I can’t even explain.”

To share it with Paul means that much more.

"That’s where it is right now. I’m not really good at waxing eloquent about how I feel other than just telling you I just feel grateful for this opportunity and to be on this team and in this moment and have a chance to move forward.”