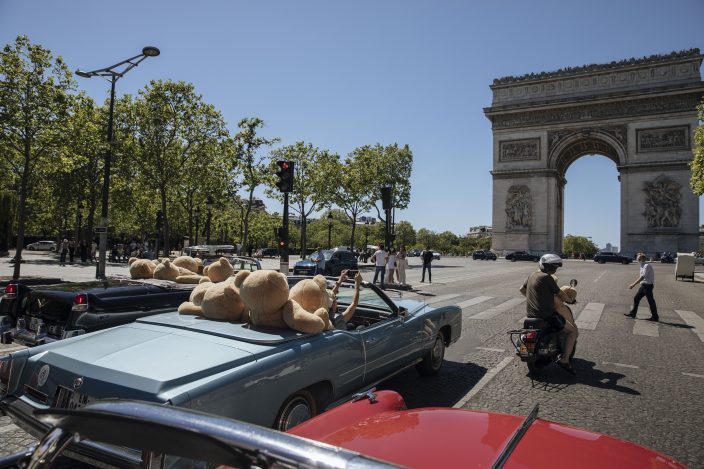 Teddy bears, set up by Philippe Labourel, who wants to be named 'Le papa des nounours' (Teddy Bears father) are pictured inside American vintage cars driving through Paris, Sunday, June, 13, 2021. The event took place in a show of support for the tourism industry which was hit by the COVID-19 pandemic. (AP PhotoLewis Joly) 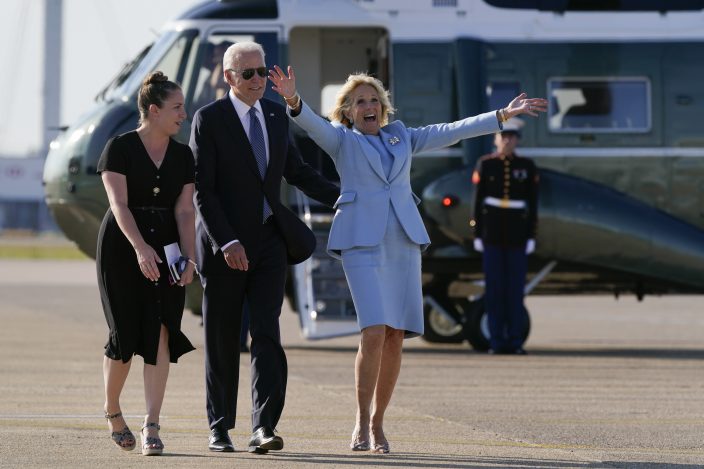 NATO-BIDEN — President Joe Biden makes his entrance at a NATO summit aiming to consult European allies on efforts to counter provocative actions by China and Russia while highlighting the U.S. commitment to the 30-country alliance that was frequently maligned by predecessor Donald Trump. By Jonathan Lemire, Aamer Madhani, and Lorne Cook. SENT: 1,000 words, photos.

BIDEN-PUTIN — Biden frequently talks about what he sees as central in executing effective foreign policy: building personal relationships. But Biden has made clear that the virtue of fusing a personal connection with Russia’s Vladimir Putin might have its limits. By Aamer Madhani. SENT: 1,230 words, photos. Also see US-RUSSIA-SUMMIT-NERVOUS-ALLIES below.

ISRAEL-POLITICS — For the first time in 12 years, Israelis woke up to a new government and a new prime minister after Naftali Bennett secured the backing of parliament and ousted longtime leader Benjamin Netanyahu. The two were slated to hold a handover meeting later in the day, but without the formal ceremony that traditionally accompanies a change in government. By Ilan Ben Zion. SENT: 570 words, photos.

IRAN-ELECTIONS-VOICES — Iranians this week are preparing to vote in — or perhaps to boycott — a presidential election that many fear will only underscore their powerlessness to shape the country’s fate. The disappointment in term-limited President Hassan Rouhani’s relatively moderate administration has given hard-liners an edge this time, analysts say, even as the U.S. and Iran now negotiate a return to the landmark 2015 nuclear accord. By Mohammad Nasiri. SENT: 910 words, photos.

MYANMAR-SUU KYI — Myanmar’s ousted leader Aung San Suu Kyi was set to go on trial on charges that many observers have criticized as attempt by the military junta that deposed her to delegitimize her democratic election and cripple her political future. By Grant Peck. SENT: 750 words, photo.

JAPAN-GHOSN’S ESCAPE-TRIAL — Two Americans who are charged with helping former Nissan chairman Carlos Ghosn flee Japan while facing accusations of financial misconduct agreed they took part in a scheme in which Ghosn hid in luggage and was flown out of the country. By Business Writer Yuri Kageyama. SENT: 650 words, photos.

VIRUS OUTBREAK-BRITAIN — British Prime Minister Boris Johnson is expected to confirm that the next planned relaxation of coronavirus restrictions in England will be delayed as a result of the spread of the delta variant first identified in India. SENT: 560 words, photos. With VIRUS-OUTBREAK-THE-LATEST.

BIDEN-CABINET-TRAVEL — Biden’s Cabinet secretaries have been touring the country to marshal support for the administration’s infrastructure package and the larger Biden agenda, a departure from the previous president’s preference for remaining the center of attention. SENT: 930 words, photos.

SUPREME COURT-AFFIRMATIVE ACTION — With abortion and guns already on the agenda, the conservative-dominated Supreme Court is considering adding a third blockbuster issue — whether to ban consideration of race in college admissions. SENT: 780 words, photos.

US-RUSSIA-SUMMIT-NERVOUS-ALLIES — Central and Eastern European nations are anxious about the coming summit meeting between Biden and Putin, wary of what they see as hostile intentions from the Kremlin. SENT: 1,090 words, photos.

OBIT-NED BEATTY — Ned Beatty, the Oscar-nominated character actor who in half a century of American movies, including “Deliverance,” “Network” and “Superman,” was a booming, indelible presence in even the smallest parts, has died. He was 83. By Film Writer Jake Coyle. SENT: 750 words, photos.