A judge on Monday ordered that the murder trial of New York real estate heir Robert Durst will continue, despite defense requests for a delay because they say he's in such pain that he can't stand up to dress for trial.

Durst was hospitalized and the trial was put on pause Thursday. On Monday, with the Los Angeles County jail system doctors declaring Durst fit for court, Superior Court Judge Mark E. Windham ordered that testimony in the trial, which resumed last month after a 14-month pandemic delay, would continue.

The 78-year-old Durst, charged with killing his best friend Susan Berman, appeared in court looking frail in a wheelchair and jail garb, with a catheter attached that he held up to show the judge. 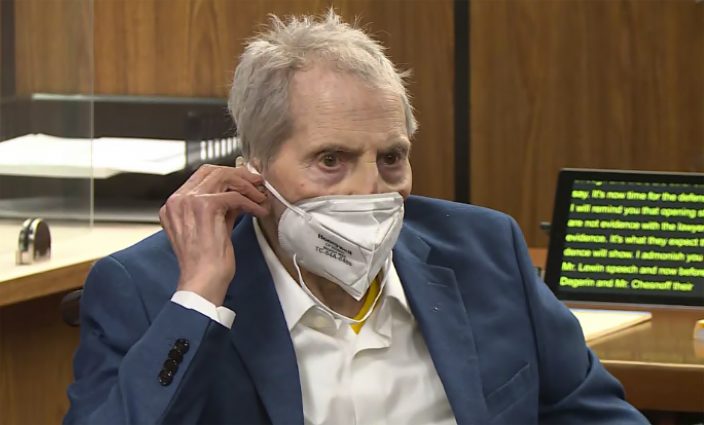 FILE - In this still image taken from the Law&Crime Network court video, real estate heir Robert Durst watches as his defense attorney Dick DeGuerin presents a new round of opening statements in the murder case against Durst after a 14-month recess due to the coronavirus pandemic in Los Angeles County Superior Court in Inglewood, Calif., on Wednesday, May 19, 2021. Durst, 78, an heir to a New York commercial real estate empire, is charged with first-degree murder in the slaying of his best friend, Susan Berman. A judge on Monday, June 14 has ordered that the trial of Durst will continue, despite defense requests for a delay because he's in too much pain. Durst was hospitalized and the trial was put on pause Thursday, June 10. (Law&Crime Network via AP, Pool, File)

Defense attorneys argued adamantly that the trial should be adjourned again because Durst was in pain, and because he couldn't get into the street clothes he is allowed to wear to avoid prejudicing the jury. The lawyers said Durst had a urinary tract infection as a consequence of bladder cancer, and had undiagnosed health problems that they couldn't name because the jail hospital had denied them information and access to him.

“I understand he’s in a good amount of pain because of the catheter,” Windham said.

As testimony resumed, the judge had a blanket put over Durst to cover up his jail clothes and to “maintain his dignity to some degree,” adding that “one doesn’t ordinarily meet with the public with a catheter bag in full view.”

Durst is on trial for the 2000 killing of Berman at her Los Angeles home. Prosecutors have also been allowed to present evidence that Durst killed his wife, who disappeared in 1982, and that he deliberately killed a Texas man in 2000. Durst has denied killing Berman or having any involvement in his wife's disappearance. He was acquitted in the killing in Texas, which his lawyers argued was an accident.

Deputy District Attorney John Lewin argued Monday that Durst, who fled authorities after two of the deaths, had used countless ploys to avoid facing trial. The prosecutor argued that if anything Durst's appearance hurt the prosecution.

Durst trial to resume after long delay. Will jury be ready?