Top leaders from the The Church of Jesus Christ of Latter-day Saints announced $9.25 million in new educational and humanitarian projects Monday as they seek to build on an alliance formed with the NAACP in 2018 as part of the faith's efforts to improve race relations.

The Utah-based church will donate $3 million to fund scholarships for three years for Black students through the United Negro College Fund and give $250,000 to create a fellowship for students from the United States to travel to Ghana to learn about slavery, said church president Russell M. Nelson at a news conference in Salt Lake City.

The faith known widely as the Mormon church will also give $6 million to fund three years of humanitarian aid aimed at helping underprivileged people in six metro areas of the United States. They announced the initiatives ahead of Juneteenth, a holiday celebrated June 19 that commemorates the date of the emancipation of enslaved people in the United States. 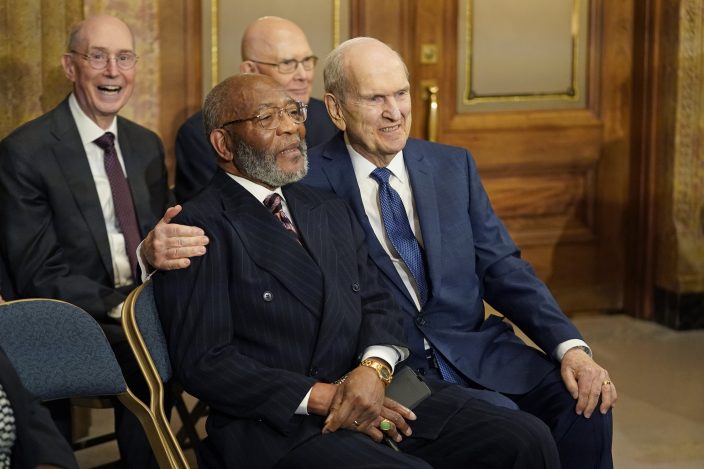 Nelson made yet another plea for people to root out the “ugly sin of racism” during his prepared remarks as he continues to make racial injustice a priority since assuming the top post in 2018 overseeing the faith of 16.5 million members worldwide.

“Leaders of the church have found common ground with the NAACP as we have discussed challenges that best some of God’s children,” Nelson said. “We have considered specific things we might do to alleviate problems and improve the future of some who are currently in distress. We know our limitations. The challenges are huge, and our capacities are limited. But together we want to make a difference, even though our efforts may seem relatively small.”

Its partnership with the civil rights organization is part of the religion's efforts to improve race relations. Until 1978, the church had a ban on Black men in the faith's lay priesthood that was rooted in the belief that black skin was a curse. The issue lingers as one of the most sensitive topics in the religion’s history. 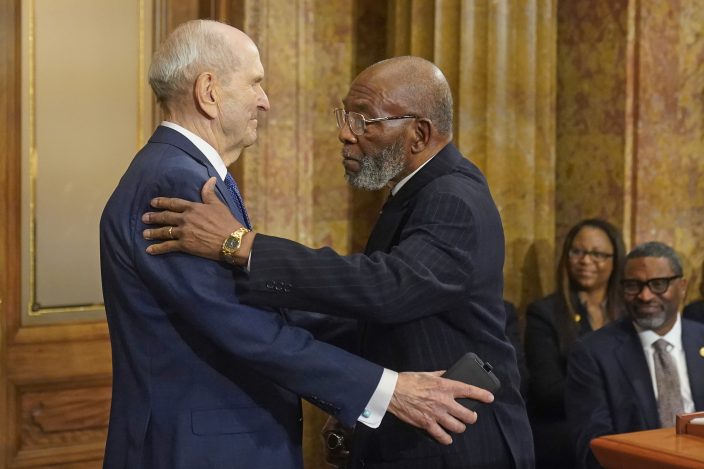 The Utah-based religion doesn’t provide ethnic or racial breakdowns of its members, but scholars say Black people make up a small portion of its membership.

In 2013, the church wrote an essay disavowing the ban and giving the reasons behind it, saying it was put into place during an era of great racial divide that influenced early teachings of the church. The writing was the most comprehensive explanation of why the religion had previously had barred men of African descent from the lay clergy and was lauded by many as an important step in the religion’s history. Others, though, wished it had gone further and included a formal apology.

As was the case when the church and NAACP announced the alliance three years ago, there was no talk of the ban or any past issues. The focus stayed squarely on the present and future.

The new programs come after a year of worldwide reckoning over racial injustice triggered by the killing of George Floyd by a police officer in Minneapolis that triggered protests.

“In this environment where people seek to create otherness or tribalism, we can stand here today as a beacon of light,” NAACP President Derrick Johnson said. “If we can see the Christ in one another, we can start from a place of being open and understanding, start from a place to appreciate one's uniqueness as their genius.”

The Rev. Amos C. Brown, a pastor of the Third Baptist Church of San Francisco who will be the namesake of the fellowship to Ghana, delivered spirited remarks that started with him effusively complimenting Nelson for his leadership and jokingly calling him “my brother of another mother.”

His quip drew a wide smile and laugh from Nelson, who embraced Brown after his remarks.

Brown said the 50 students chosen to participate in the fellowship in Ghana — scheduled to take place next summer — will be able to retrace the slave routes from the African country and witness the horrible and inhuman system of slavery. He said students won't become bitter over it, but rather become “agents of betterment."

Calling the United States a nation in crisis, Brown said the partnership has the opportunity to do important work.

“This partnership sees the extreme situation as being the opportunity for a faith community in America to do more than just talk the talk, but walk the walk of telling the truth, of being trusting with each other, respecting the worth and dignity of everyone no matter how different they may be,” Brown said. “We're on our way, and we ain't going to let nobody turn us around.”