Patrik Schick scored both goals for the Czech Republic on Monday in a 2-0 victory over Scotland at the European Championship.

His second goal will be talked about for years to come.

Scotland lost possession when a shot toward the Czech goal was blocked and the ball fell to Schick. The Bayer Leverkusen forward looked up and spotted opposing goalkeeper David Marshall way off his line before hitting a long, curling shot that bounced into goal. 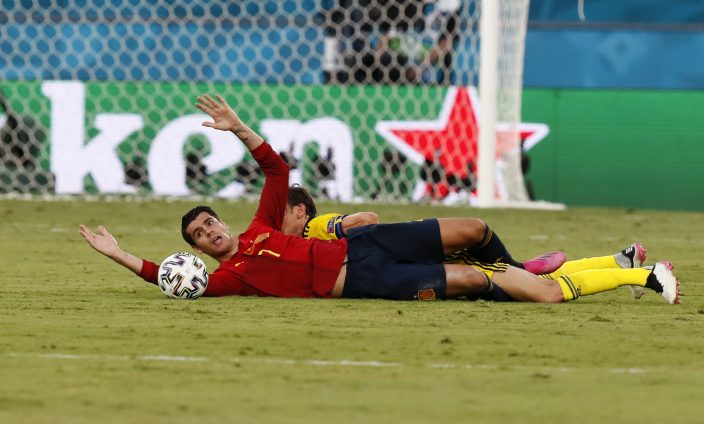 Marshall gave chase, but he could only watch the ball sail into the goal before he ended up tangled in net.

“I took a look (at the goalkeeper) to see where he was standing and he was pretty high," Schick said. "I checked it again and fired.”

UEFA said it was the longest distance for a goal in the tournament at 49.7 meters. The previous record of 38.6 meters came from Germany midfielder Torsten Frings at Euro 2004.

Schick had earlier given the Czechs the lead in the 42nd minute with a powerful header after muscling himself between two Scotland defenders. It was an excellent finish that came from an equally outstanding cross from right back Vladimír Coufal.

The chances came and went but neither Spain nor Sweden managed to put any of them in the net in a 0-0 draw.

Spain dominated possession and kept the pressure on the opposing area for most of the match, but the Swedes had the best opportunities to score.

Alexander Isak, who plays for Spanish club Real Sociedad, had a shot from inside the area hit the post after deflecting off Spain defender Marcos Llorente in front of the goal line.

Early in the second half, Marcus Berg was inside the area with the ball coming his way, but he mishit his shot.

Álvaro Morata had Spain’s best chance just a few minutes before Isak but his shot missed wide with goalkeeper Robin Olsen the only opponent to beat. Olsen also saved a close-range header by substitute Gerard Moreno in the 90th minute.

Spain pressed until the end, but kept misfiring.

Slovakia defender Milan Skriniar stopped Robert Lewandowski from scoring at one end, and then showed the world player of the year just how to do it on the other.

Underlining his growing importance for his national team, Skriniar played a crucial role at both ends of the field and scored the winning goal in Slovakia’s 2-1 victory over Poland.

Lewandowski endured another tough match in a major soccer tournament, with the uncompromising Skriniar helping to stifle the Bayern Munich striker. Lewandowski didn’t have a clear-cut chance and now has only two goals in 12 matches at a World Cup or European Championship.

The center back then demonstrated he also has an eye for goal by stretching to bring down the ball at a corner and swivelling to toe-poke his shot into the net from 15 meters in the 69th minute.

It was a bad day for Poland’s other best-known player, too.

Wojciech Szczesny became the first goalkeeper to score an own-goal at the tournament, even if he was completely blameless. The Juventus keeper was unfortunate as the ball rebounded off his near post, onto his outstretched arm and back into the net following a shot by Slovakia winger Robert Mak in the 18th minute.

Karol Linetty, justifying his selection ahead of Jakub Moder in central midfield, equalized for Poland barely 30 seconds into the second half.