A woman was killed and three other people were injured when a vehicle drove into demonstrators during a protest in the Minneapolis neighborhood where a Black man was fatally shot this month during his attempted arrest by members of a federal task force, police said Monday.

The crash happened at about 11:40 p.m. Sunday in Minneapolis' Uptown neighborhood. Witnesses said the driver of an SUV struck a parked car, tossing it into the crowd of demonstrators. Police spokesman John Elder did not confirm that account, and said authorities are still investigating.

Police said protesters pulled the driver from his vehicle and witnesses told police that demonstrators began striking him. The driver was taken into custody and was being treated for injuries at a hospital. Authorities have not released his name or the names of the three people who were injured. 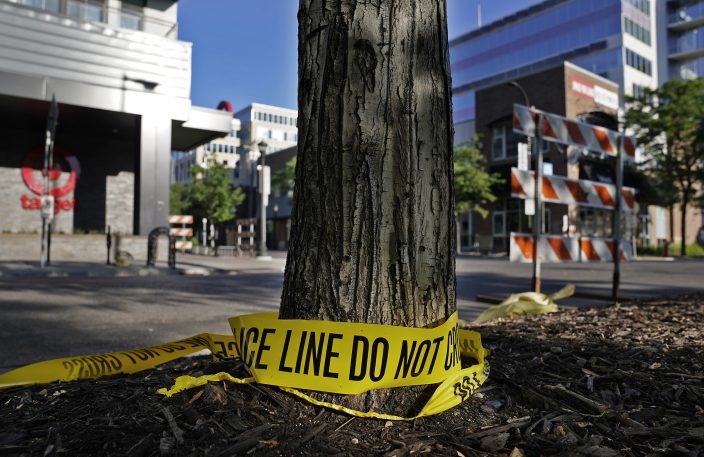 Discarded police tape lays outside a Target Monday, June 14, 2021, in Uptown Minneapolis. Minneapolis police and witnesses say a woman was killed and multiple others were injured when an SUV struck a parked car and tossed it into demonstrators during a protest late Sunday in Minneapolis. (David JolesStar Tribune via AP)

The brother of the woman who died identified her as Deona M. Knajdek. Garrett Knajdek told the Star Tribune his sister would have celebrated her 32nd birthday on Wednesday. He said she had 11- and 13-year-old daughters, and was actively involved in issues surrounding social justice.

“She constantly (was) sacrificing herself for everyone around her,” he said, “no matter the cost, obviously.”

Police said the driver’s motive was not immediately known, but that a preliminary investigation indicated drugs or alcohol may have been a contributing factor. A 35-year-old St. Paul man was booked into the Hennepin County Jail early Monday on suspicion of criminal vehicular homicide, driving after a license was canceled and providing false information to police. The man, who hasn't been formally charged, has multiple convictions for driving while impaired, according to online court records. 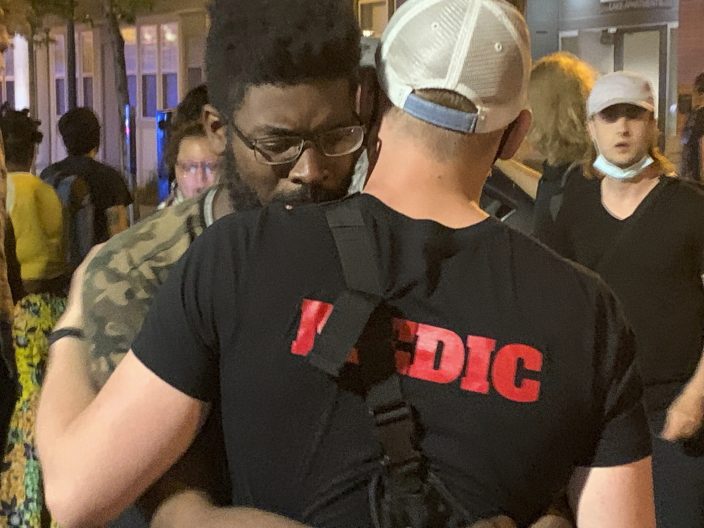 A medic embraces activist D.J. Hooker after an SUV struck a parked car and tossed it into demonstrators during a protest in Minneapolis early Monday, June 14, 2021. A woman was killed and three others were injured. “The car went through the air and it hit a young woman,” Hooker told Minnesota Public Radio. (Matt SepicMinnesota Public Radio via AP)

A witness told Minnesota Public Radio that the SUV was going very fast and appeared to accelerate as it got closer to demonstrators who had blocked off a street. D.J. Hooker said the driver struck a car parked across one of the traffic lanes, sending that car flying.

Another witness, Brett Williams, said Knajdek was thrown into a stop light. 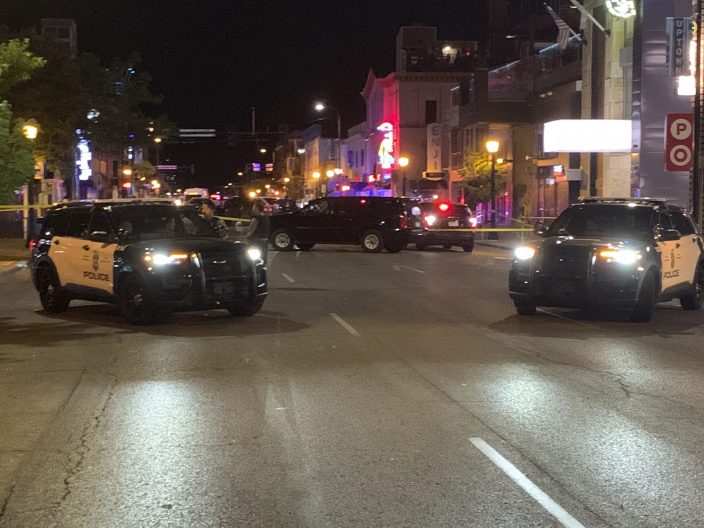 Police vehicles block a street in Minneapolis early Monday, June 14, 2021, after a woman was killed and three others were injured when an SUV struck a parked car and tossed it into demonstrators during a protest in the Minneapolis neighborhood where a Black man was fatally shot earlier this month during an arrest attempt, police and witnesses said Monday. (Matt SerpicMinnesota Public Radio via AP)

Her mother, Deb Kenney, asked for prayers for the driver's family.

“The emotion we need to have right now is we need to be grateful that Deona was here and she shared it all with us,” Kenney said, according to KARE-11. “She wouldn’t want us to be angry at that man. She would have let it go in a minute, and said, what could we have done for him? What would have made a difference for him?”

She added: "She was here on her own accord, she chose to do this. She wanted to make that impact.” 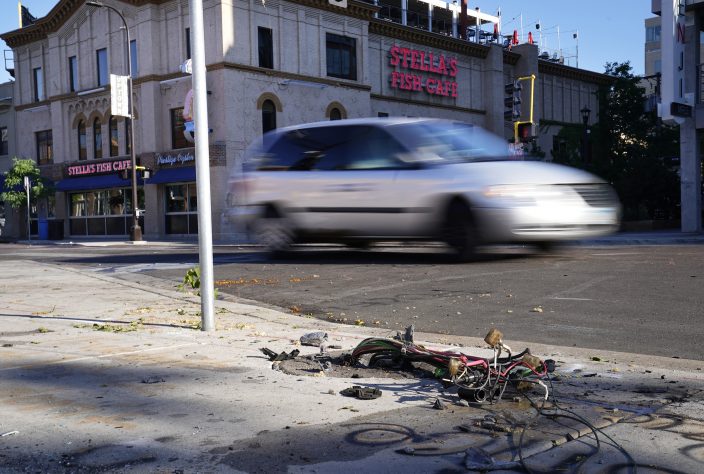 A car drives past the scene Monday, June 14, 2021, where police and witnesses say a woman was killed and multiple others were injured when an SUV struck a parked car and tossed it into demonstrators during a protest late Sunday in Uptown Minneapolis. (David JolesStar Tribune via AP)

Kenney said she hopes people don’t stop protesting because of her daughter's death, but she said demonstrators should make sure they are staying safe.

Other injuries and deaths have been reported involving vehicles at protests across the U.S. as people have increasingly taken to streets to press their grievances. In Minneapolis, marching onto freeways has become a common tactic in recent years. Last year, a semitrailer rolled into a crowd marching on a closed Minneapolis freeway following George Floyd's death. No one was seriously injured.

In response to such protests, Republican politicians in several states, including Oklahoma, Florida and Iowa, have sought legal immunity for drivers who hit protesters. 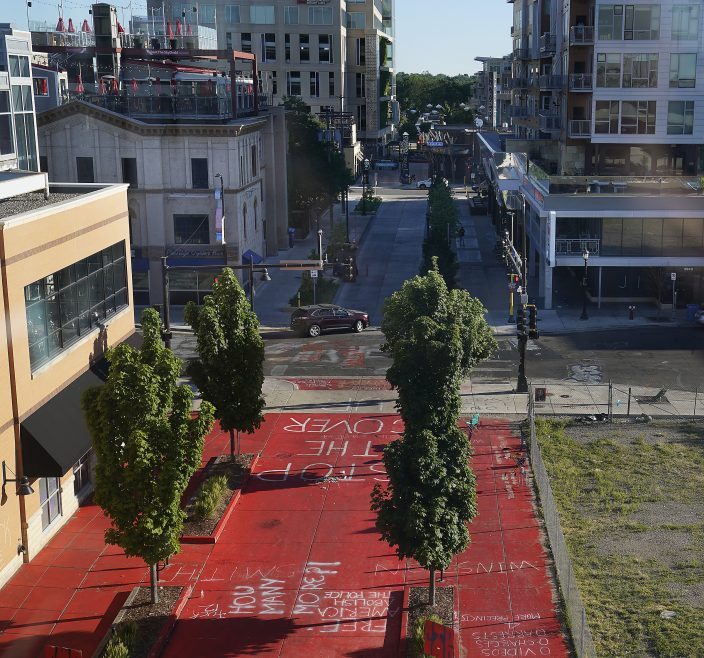 A vehicle navigates the intersection in Uptown Minneapolis, Monday, June 14, 2021. Minneapolis police and witnesses say a woman was killed and others were injured when an SUV struck a parked car and tossed it into demonstrators during a protest late Sunday in Uptown. (David JolesStar Tribune via AP)

There had been ongoing protests in Uptown, about 2 1/2 miles (4 kilometers) south of downtown, since the June 3 shooting of Winston Boogie Smith Jr., a 32-year-old father of three, by members of a federal U.S. Marshals Service task force. The Uptown area includes a mix of trendy restaurants, shops and theaters popular with the city’s younger professionals, many of whom live in apartments and condominiums in the area.

The city of Minneapolis has been on edge since Floyd’s death under an officer’s knee and the more recent fatal police shooting of another Black man, Daunte Wright, in a nearby suburb.

Smith was killed earlier this month. According to authorities, members of the U.S. Marshals Fugitive Task Force were trying to arrest Smith on a warrant for allegedly being a felon in possession of a gun. The Marshals Service said in a statement that Smith, who was in a parked vehicle, didn’t comply with law enforcement and “produced a handgun resulting in task force members firing upon the subject.” State investigators said evidence showed he fired the gun from inside his vehicle.

Smith died at the scene. A 27-year-old woman who was a passenger in Smith's vehicle said she never saw a gun on Smith or in the vehicle, her attorneys said last week — contradicting authorities' account about Smith's actions.

This story has been updated to correct the name of the neighborhood to Uptown, not Upton.