Diego Maradona's life was honored in a tribute featuring lights and projections onto the pitch before Argentina's Copa America opener against Chile.

No fans were present at the Nilton Santos stadium in Rio de Janeiro for the latest tribute to the Argentine football great, this one organized by South American soccer body CONMEBOL. Maradona died at age 60 last November.

The 3-minute video, which was shared by CONMEBOL's social media channels, had “Live is Life” by Opus as its soundtrack. It's the same song that was on as Maradona famously warmed up with Napoli ahead of a UEFA Cup semifinal against Bayern Munich in 1989. 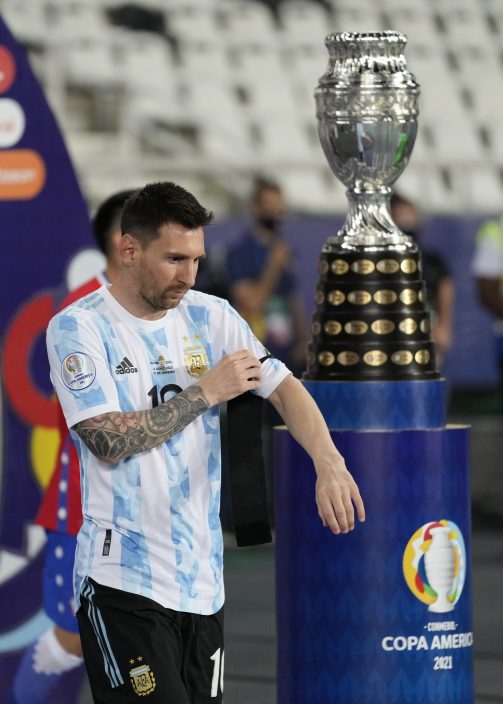 Argentina's Lionel Messi walks past the Copa America trophy as he enters the field for a soccer match against Chile at the Nilton Santos stadium in Rio de Janeiro, Brazil, Monday, June 14, 2021. (AP PhotoRicardo Mazalan)

The tribute video featured a holographic of Maradona doing kick-ups while his shirt changed colors to represent all the teams he played for: Argentinos Juniors, Boca Juniors, Barcelona, Napoli, Sevilla, Newell’s Old Boys and Argentina.

It also featured images of some of Maradona's most representative moments; as a kid talking about his desire to play in the World Cup; receiving the trophy from Mexico's president in 1986; and his goals against England in that World Cup.

“We are paying our respects to one of the greatest players in history," CONMEBOL said in a statement. 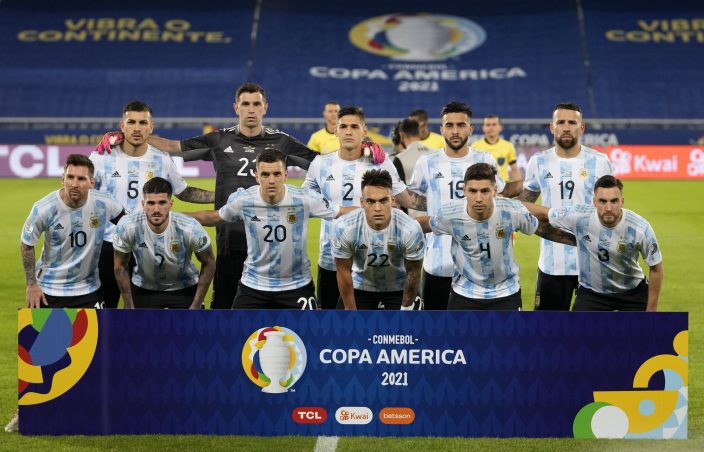 Argentina's team pose for a picture prior to a Copa America soccer match against Chile at the Nilton Santos stadium in Rio de Janeiro, Brazil, Monday, June 14, 2021. (AP PhotoRicardo Mazalan)

After Maradona's death last year, the governing body for South American soccer described him as “the greatest ever,” which caused a stir in Brazil — where Maradona is also beloved, but Pelé is considered better.

The video tribute to Maradona was expected to take place in Argentina, but the country was dropped as tournament host. Brazil became stepped in as emergency host only two weeks ago despite its alarming COVID-19 figures.

The tribute ends with Maradona's speech during his goodbye to Boca Juniors in 2001 at the La Bombonera stadium.

“May this party never end. May this love you have for me never end," Maradona said then. The projection ends with his year of birth and the infinity symbol.

Argentina drew Chile 1-1 after the tribute.