IOC Vice President John Coates arrived in Tokyo on Tuesday, the same day that organizers and the International Olympic Committee were set to roll out the third and final edition of their so-called Playbooks.

Coates is the International Olympic Committee's official in charge of overseeing the Tokyo Games. He has been a controversial figure in Japan, saying the postponed Olympics would go ahead even if the country were under a state of emergency.

Organizers confirmed Coates' arrival from Australia. Officials last week said he would be quarantined for three days, followed by 11 days of restricted activities during the COVID-19 pandemic. 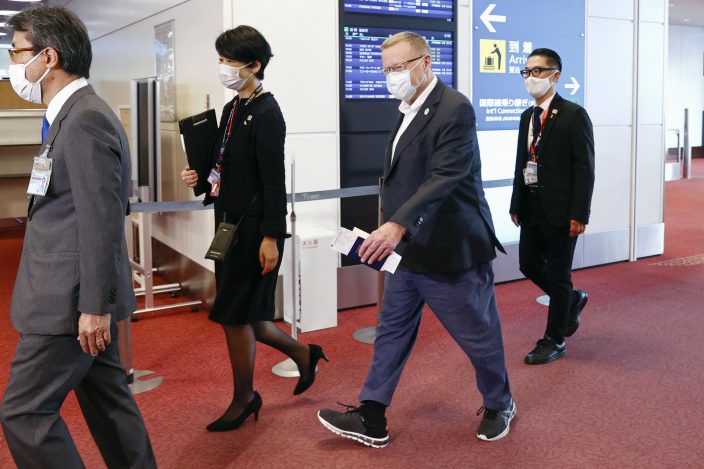 International Olympic Committee Vice President John Coates, third from left, walks upon arrival at Haneda Airport in Tokyo Tuesday, June 15, 2021. Coates arrived in Tokyo on Tuesday, the same day organizers and the IOC roll out the final rendition of their so-called Playbooks.(Takuto KanekoKyodo News via AP)

Coates arrives with Tokyo and other parts of Japan under a state of emergency until June 20, but with reported new cases falling and a slow vaccine rollout finally speeding up.

Less than 5% of Japanese have been fully vaccinated.

The IOC says more that 80% of those staying in the Olympic Village will be fully vaccinated, although it did not provide details how it reached that conclusion. 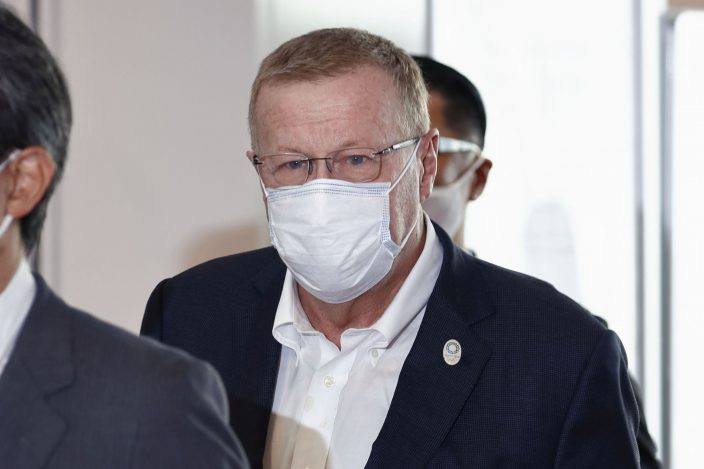 The Japanese medical community has largely opposed holding these Olympics in Tokyo, arguing the risks are too great. The government’s main medical adviser Dr. Shigeru Omi has said it’s “abnormal” to hold the Olympics during a pandemic.

The Playbooks are COVID-19 rule books for athletes and all others entering Japan to participate in the Olympics.

The second version, published in April, was criticized last month in an editorial by The New England Journal of Medicine that said, among other things, that the Playbooks “are not built on scientifically rigorous risk assessment."

The final version is not expected to deliver major changes, but likely more small details for everyone from athletes to media, broadcasters, and tens of thousands of support staff.

— All participants will have to pass two COVID-19 tests before leaving their home country. And they will be tested upon arrival in Japan.

— Athletes will be tested daily, as will those in close proximity to athletes.

— Other games participants will be tested daily for the first three days, and then as required.

— All games participants must use dedicated vehicles and avoid public transportation for the first 14 days.

— Games participants will avoid a 14-day quarantine rule for entering Japan, but to do so they must fill out a schedule listing their plans for that period, and also download a tracking app.

Since the second edition was published, organizers have said participants' movement will be monitored by GPS, and that they must sign a pledge to follow the rules. In addition, athletes must sign a waiver in regard to any harm suffered by COVID-19.

Fans from abroad have been banned, and organizers say a decision on having any local fans at Olympic venues will be announced by the end of the month.

The IOC is pushing ahead, partly because it gets almost 75% of its revenue from selling broadcast rights. That income flow has been stalled during the postponement of the Tokyo Games. In addition, Japan has officially spent $15.4 billion or organize the Olympics, although government audits say the figure is much larger.

Organizers say, including 15,400 Olympic and Paralympic athletes, the total number of people expected to enter Tokyo for the Olympics is about 93,000.