An investigation has begun into the cause of a gas line explosion at a market in central China where the death toll has risen to 25.

Rescuers climbed over smashed bricks and slabs of concrete to find victims following the blast early Sunday that ripped through the market in the Hubei province city of Shiyan as residents were buying breakfast and fresh vegetables.

Local officials announced the higher death toll and the formation of an investigation team at a news conference late Monday. 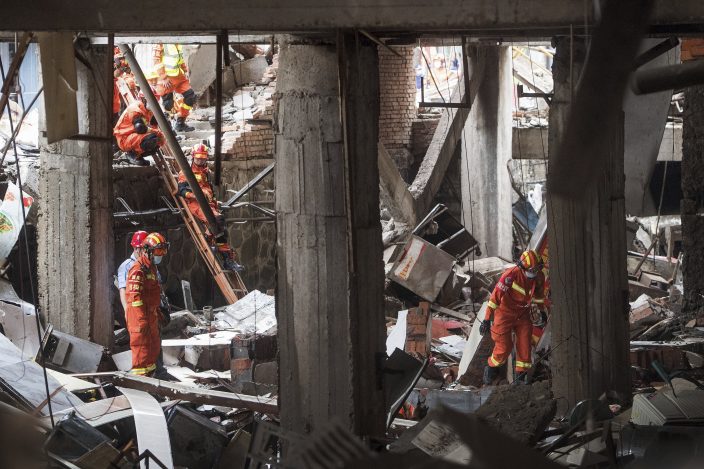 In this photo released by Xinhua News Agency, rescue workers search for survivors in the aftermath of a gas explosion in Shiyan city in central China's Hubei Province on Sunday, June 13, 2021. At least a dozen people were killed and more seriously injured Sunday after a gas line explosion tore through the residential neighborhood in central China. (Xiao YijiuXinhua via AP)

The two-story building built in the early 1990s included pharmacies, restaurants and other businesses. More than 900 people were evacuated from the area.

Chinese President Xi Jinping has called for a thorough investigation into the cause of the blast in order to create a “good atmosphere” for the 100th anniversary of the founding of the ruling Communist Party on July 1, state media reported.

The blast appeared similar to one that occurred in the northeastern port of Qingdao in 2013, in which 55 people were killed when underground pipelines ripped open following a leak.

Frequent deadly accidents are usually traced to weak adherence to safety standards, poor maintenance and corruption among enforcement bodies. Among the worst accidents was a massive 2015 explosion at a chemical warehouse in the port city of Tianjin that killed 173 people, most of them firefighters and police officers.