José Ramírez picked up a pair of RBIs — made possible by Baltimore blunders in the field — and the Cleveland Indians extended the Orioles' road losing streak to 16 straight games with a 4-3 win Monday night.

The Indians' victory was tempered by the team losing reigning AL Cy Young winner Shane Bieber for an unknown period due to a shoulder strain. Bieber was placed on the injured list and won't pick up a baseball for at least two weeks.

Ramírez drove in a run off Dean Kremer (0-6) in the first inning when Baltimore left fielder DJ Stewart slipped in the wet grass going after a routine fly. Ramirez added an RBI double in the sixth after Orioles second baseman Stevie Wilkerson dropped his foul pop, giving him another try. 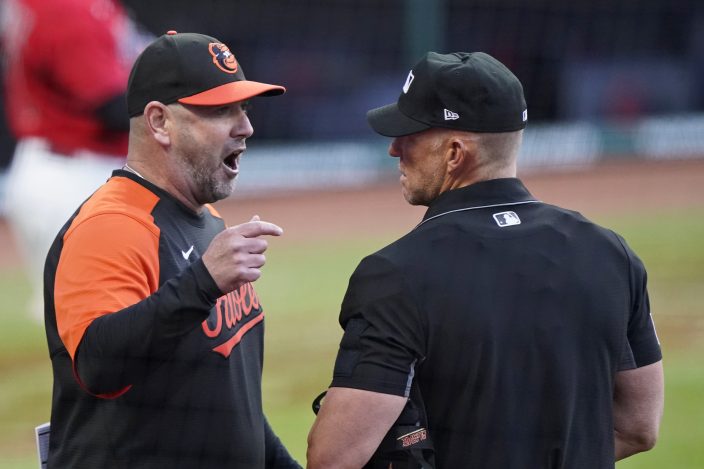 Indians rookie reliever Nick Sandlin (1-0) picked up his first career win by striking out three of the five batters he faced.

James Karinchak worked out of a jam in the seventh and followed a leadoff walk by striking out the side in the eighth. Emmanuel Clase worked a 1-2-3 ninth for his 10th save.

The start was pushed back one hour by rain, but the Orioles couldn't delay extending their team record road losing slide. Baltimore hasn't won away from home since John Means pitched a no-hitter at Seattle on May 5. 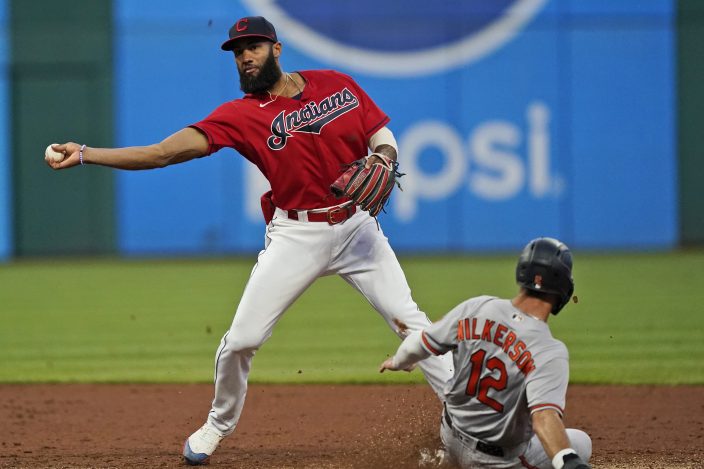 Cleveland Indians' Amed Rosario, left, gets Baltimore Orioles' Stevie Wilkerson at second base in the third inning of a baseball game, Monday, June 14, 2021, in Cleveland. Rosario was able to make the throw to get Orioles' Cedric Mullins at first base for a double play. (AP PhotoTony Dejak)

As bad as it is, Baltimore's streak isn't even the longest in the majors this season. Texas also lost 16 in a row from May 10 to June 11, and Arizona had dropped 19 straight, heading into its Monday night matchup with San Francisco.

Orioles manager Brandon Hyde made it through the rain delay, but not the first inning as he got ejected for arguing. 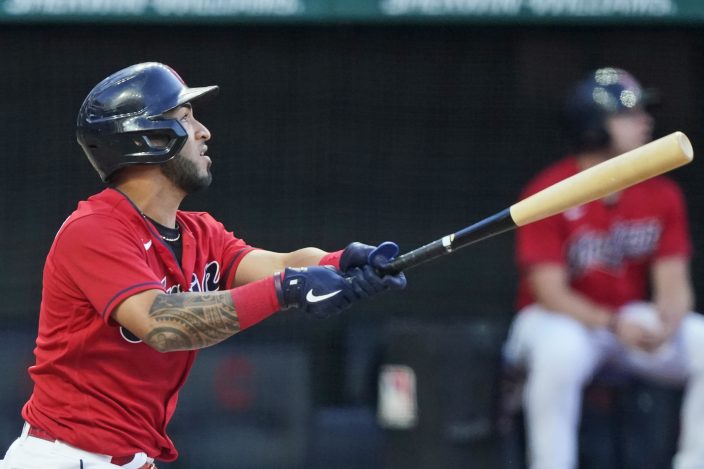 The Indians caught a break while scoring three runs in the first inning, which included Hyde getting tossed for protesting an overturned call.

With a runner on first, Indians manager Terry Francona won a video review challenge when Amed Rosario was awarded first after being hit by a pitch. Hyde charged from the dugout and was immediately thrown out by first base umpire Nestor Ceja.

Cleveland's first run scored when Ramírez lofted a fly and Stewart lost his footing and fell. Eddie Rosario followed with a sacrifice fly and Bobby Bradley hit an RBI single. 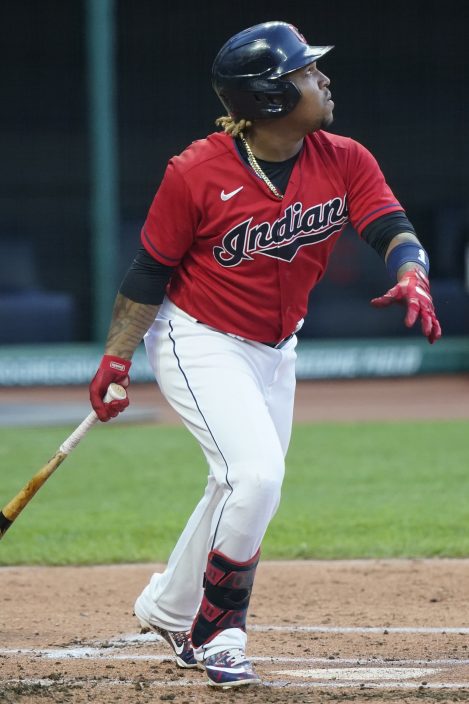 Cleveland Indians' Jose Ramirez watches his RBI-single in the first inning of a baseball game against the Baltimore Orioles, Monday, June 14, 2021, in Cleveland. (AP PhotoTony Dejak)

The Orioles cut it to 3-2 in the fourth on RBI groundouts by Stewart and Freddy Galvis.

Ramírez capped a nine-pitch at-bat with his double in the sixth, the hit coming after failed to squeeze his deep foul ball way down the first base line.

Baltimore closed within 4-3 in the seventh on pinch-hitter Maikel Franco's RBI single. 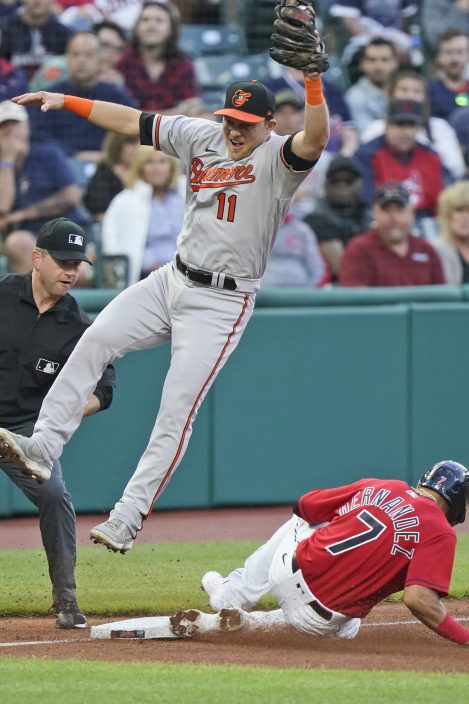 Baltimore Orioles' Pat Valaika (11) jumps for the ball as Cleveland Indians' Cesar Hernandez (7) advances to third base on a wild pitch in the first inning of a baseball game, Monday, June 14, 2021, in Cleveland. (AP PhotoTony Dejak)

Bieber hasn’t pitched up to his lofty standards lately, and the right-hander could be feeling the effects of averaging an MLB-leading 105 pitches per start. He threw 107 in only five innings in a loss to Seattle on Sunday and underwent an MRI that revealed swelling.

Bieber won’t throw for two weeks and be re-evaluated. 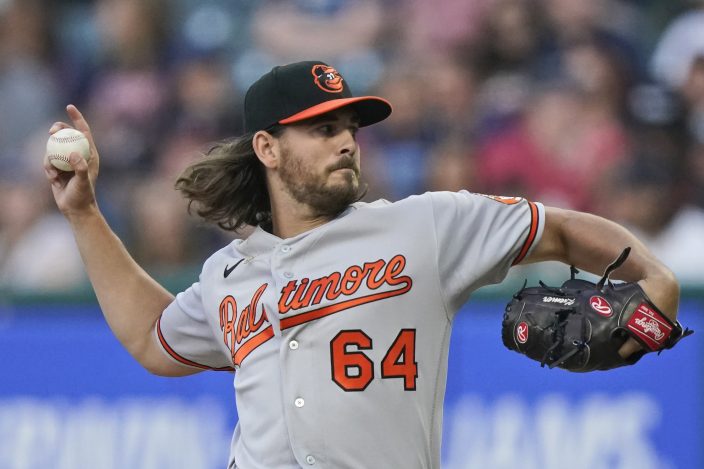 “So we need to slow him down, let this thing calm down,” manager Terry Francona said.

The Indians will only play two teams currently with winning records the rest of June. After four games with the Orioles, who came in with the AL's worst record, they'll face Pittsburgh, the Cubs, Minnesota and Detroit. 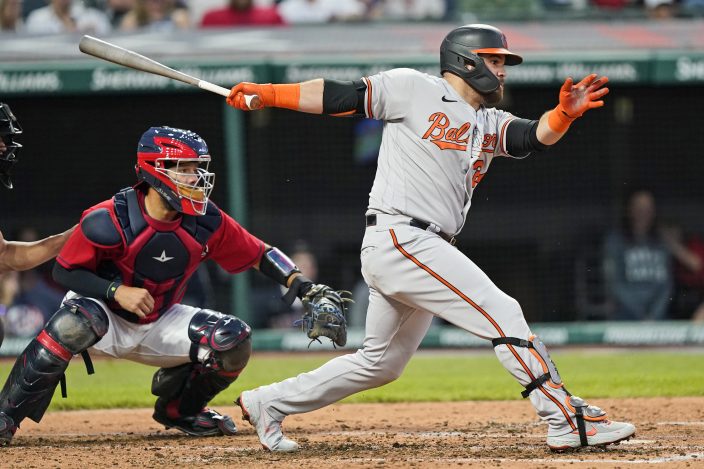 Baltimore Orioles' DJ Stewart, right, hits against the Cleveland Indians in the fourth inning of a baseball game, Monday, June 14, 2021, in Cleveland. Stewart was out at first base. Trey Mancini scored on the play. Indians catcher Rene Rivera watches. (AP PhotoTony Dejak)

The easy schedule doesn't necessarily help. Cleveland entered the series 16-17 against clubs under .500 and 18-11 against winning teams.

Indians RHP Cal Quantrill (0-2) makes his third start and faces Orioles RHP Matt Harvey (3-7), who has lost seven of his past eight starts. 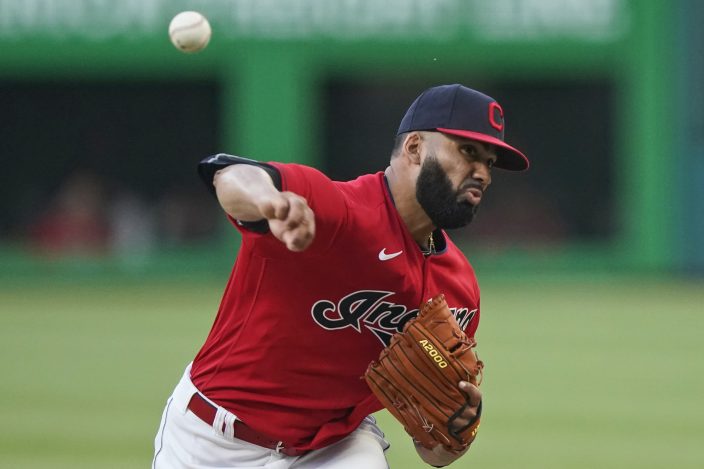