Brandon Crawford homered and drove in three runs as the San Francisco Giants sent the Arizona Diamondbacks to their 20th straight road loss with a 5-2 victory Monday night.

The Diamondbacks moved closer to the dubious major league record for consecutive road defeats held by the 1963 New York Mets, who dropped 22 in a row away from the Polo Grounds. 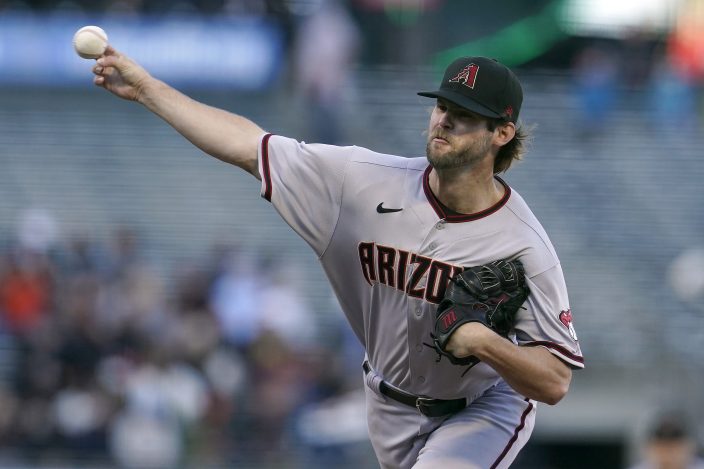 Alex Wood (6-3) won for the first time in five starts, allowing two runs and four hits in six innings, striking out seven. He snapped his three-game losing streak with his first win since May 16 at Pittsburgh.

Jake McGee closed it out for his 13th save.

Curt Casali, 7 for 70 at the plate coming into his start to spell regular catcher Buster Posey, had three hits for the Giants. 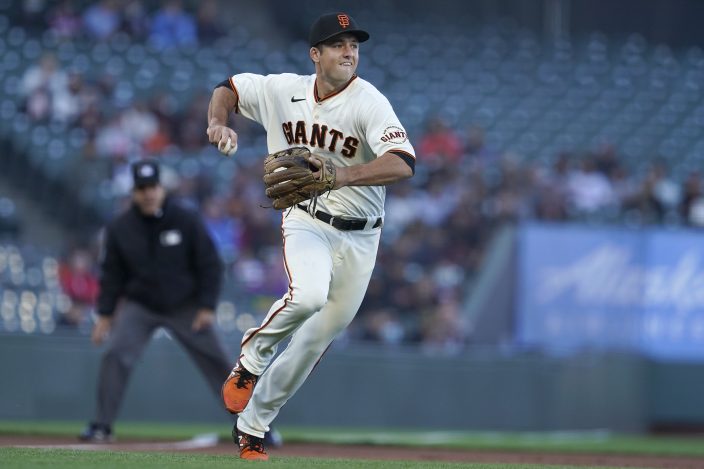 San Francisco Giants third baseman Jason Vosler throws to first base on a base hit by Arizona Diamondbacks' Eduardo Escobar during the first inning of a baseball game in San Francisco, Monday, June 14, 2021. (AP PhotoJeff Chiu)

Austin Slater’s RBI single in the eighth provided insurance for San Francisco following a four-game road split in Washington during which the Giants scored just three runs the entire series.

Crawford hit a two-run homer in the fifth for a 3-1 lead. 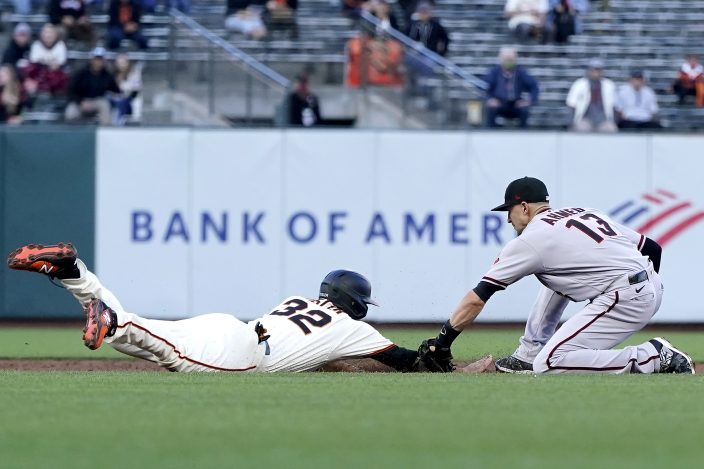 San Francisco Giants' Jason Vosler, left, is tagged out at second base by Arizona Diamondbacks shortstop Nick Ahmed on a double play hit into by Giants' LaMonte Wade Jr. during the second inning of a baseball game in San Francisco, Monday, June 14, 2021. (AP PhotoJeff Chiu)

San Francisco loaded the bases in the first with two out against Matt Peacock (2-4). After a mound visit, he induced Mike Tauchman’s inning-ending grounder.

Peacock was done after five innings for his third straight losing start.

Arizona hasn't won on the road since a 7-0 victory at Atlanta on April 25. This is the club's second double-digit losing streak this season after a 13-game skid from May 17-29. 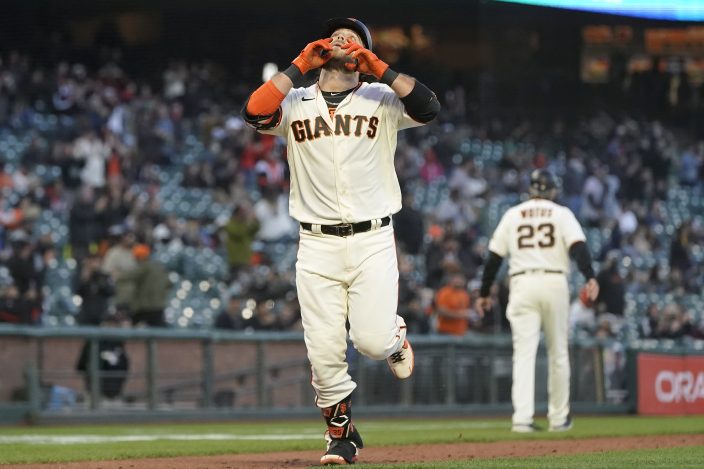 San Francisco has won six straight against Arizona, going 11-2 in the NL West matchup since the beginning of the shortened 2020 season and 7-1 at home during that stretch.

Diamondbacks: RHP Zac Gallen (sprained right elbow) is “getting close, that's a guy I think could win a Cy Young, so that's awesome," pitching coach Matt Herges said. ... RHP Luke Weaver isn't yet ready to throw as he works back from a strain in his pitching shoulder. "Luke Weaver is still in the treatment phase, he's still shut down," manager Torey Lovullo said. 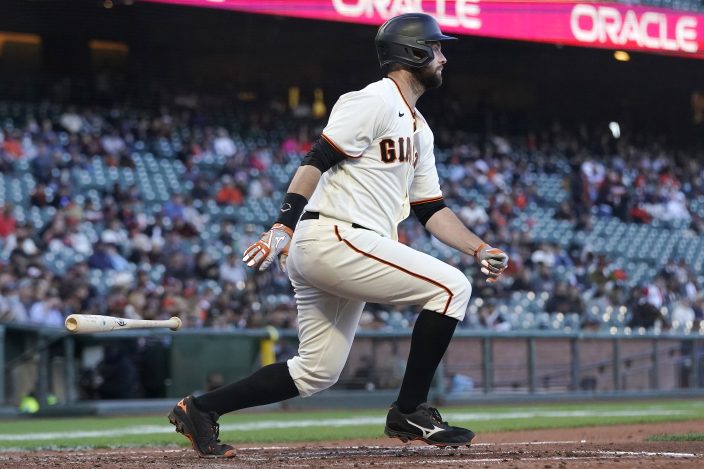 Giants: RHP Reyes Moronta (right flexor strain) began his throwing program and RHP Logan Webb (strained shoulder) was set to begin his Tuesday. ... OF Alex Dickerson could be on track to to be activated as soon as Saturday after nursing a strained upper back. ... Darin Ruf tested his strained right hamstring running the bases for the second time Monday while INF Tommy La Stella began the baserunning progression as he works back from a strained left hamstring. ... RHP Aaron Sanchez, dealing with tightness in his right biceps, is set to pitch three or four innings in a rehab appearance Thursday for Triple-A Sacramento.

The D-backs recalled RHP Corbin Martin from Triple-A Reno after optioning RHP Jon Duplantier to Reno after Sunday's game to gain more control and command. Martin arrived and did his pregame work, with Herges saying, “he's ready to roll.” 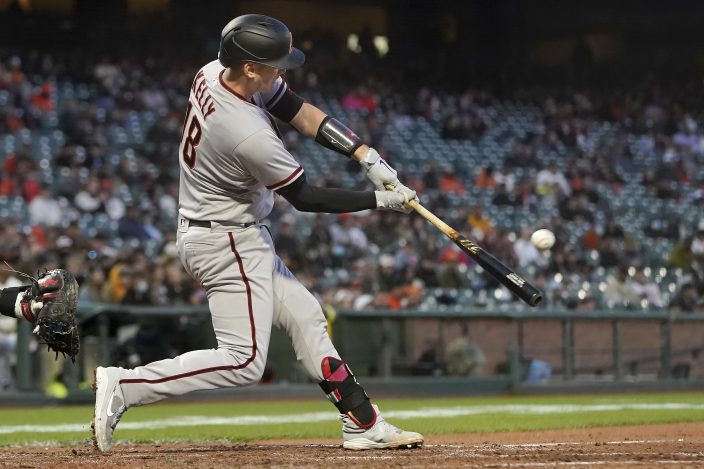 Neither team announced a Tuesday starter.

For Arizona, Lovullo said he wanted to stay versatile with the decision — and Martin was a possibility. “Corbin could be used in a variety of roles," Lovullo said. 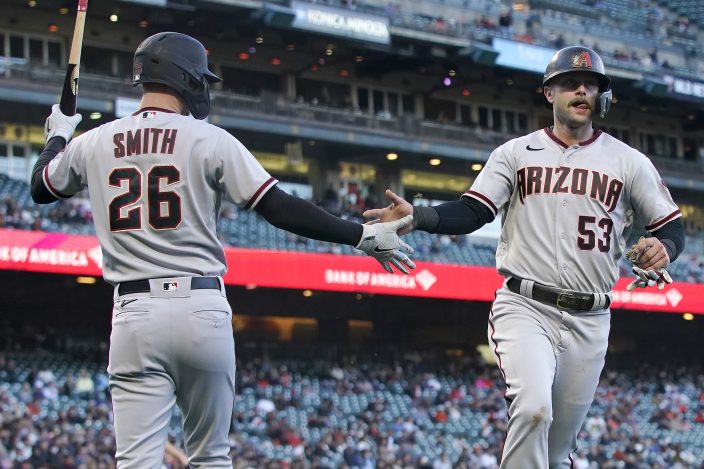 Arizona Diamondbacks' Christian Walker (53) is congratulated by teammate Pavin Smith (26) after scoring against the San Francisco Giants during the fourth inning of a baseball game in San Francisco, Monday, June 14, 2021. (AP PhotoJeff Chiu)