President Joe Biden is seeking to tamp down trade tensions with European allies as he spends one last day consulting with western democracies ahead of his highly anticipated meeting with Russian President Vladimir Putin.

After a pair of summits with Group of Seven world leaders in the U.K. and then NATO allies in Brussels, Biden meets Tuesday with European Council President Charles Michel and European Commission President Ursula von der Leyen.

The president has sought to marshal widespread European support for his efforts to counter Russia prior to his Wednesday meeting in Geneva with Putin. But the U.S.-EU relationship is not without some tensions. 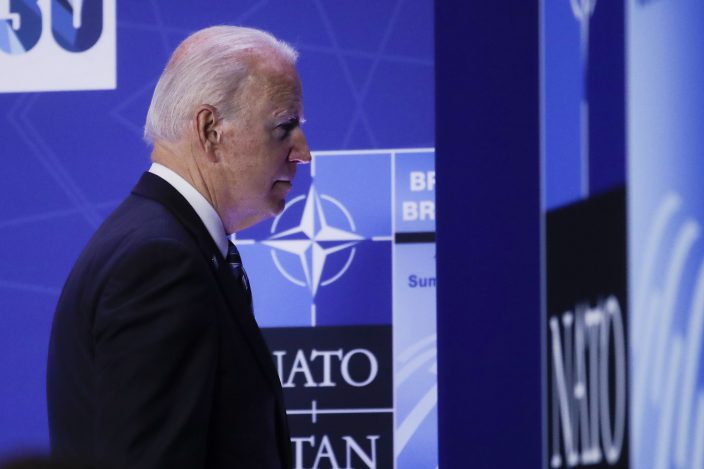 U.S. President Joe Biden leaves the podium after a media conference at a NATO summit in Brussels, Monday, June 14, 2021. U.S. President Joe Biden is taking part in his first NATO summit, where the 30-nation alliance hopes to reaffirm its unity and discuss increasingly tense relations with China and Russia, as the organization pulls its troops out after 18 years in Afghanistan. (Olivier Hoslet, Pool via AP)

Biden will meet with the top EU officials at a moment when the continent’s leaders are becoming impatient that the American president has not yet addressed his predecessor Donald Trump’s 2018 decision to impose import taxes on foreign steel and aluminum. There’s also a longstanding dispute over how much of a government subsidy each side unfairly provides for its aircraft manufacturing giant — Boeing in the United States and Airbus in the EU.

Biden isn’t expected to take action on the tariffs before heading to Geneva later Tuesday. He bristled that he needed more time to address the matter when asked by a reporter about the tariffs at his news conference at the end of the G-7 on Sunday. “A hundred and twenty days," Biden said, underestimating his time in office by weeks. "Give me a break. Need time.”

Still, White House officials think they can build more good will with Europe ahead of the Putin face-to-face meeting. 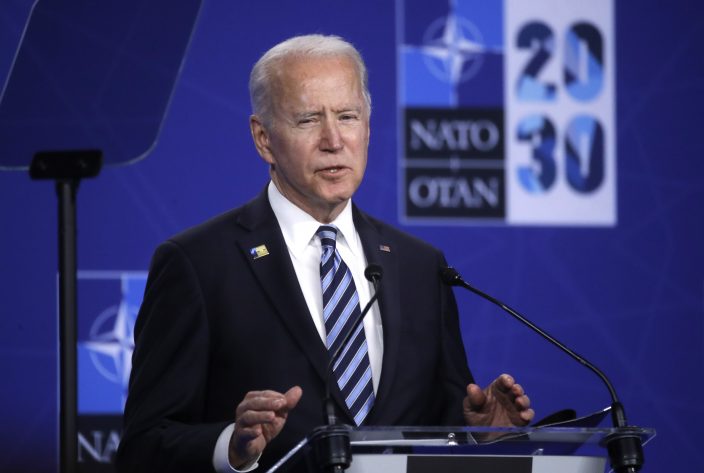 U.S. President Joe Biden speaks during a media conference during a NATO summit in Brussels, Monday, June 14, 2021. U.S. President Joe Biden is taking part in his first NATO summit, where the 30-nation alliance hopes to reaffirm its unity and discuss increasingly tense relations with China and Russia, as the organization pulls its troops out after 18 years in Afghanistan. (Olivier Hoslet, Pool via AP)

To that end, Biden, Michel and von der Leyen awee expected to announce the creation of a joint trade and technology council, according to a senior administration official who spoke on condition of anonymity ahead of the announcement.

The official said that trans-Atlantic council would work on coordinating standards for artificial intelligence, quantum computing, bio-technologies, as well as coordinating efforts on bolstering supply chain resilience. Biden is appointing Secretary of State Antony Blinken, Commerce Secretary Gina Raimondo and U.S. Trade Representative Katherine Tai to co-chair the U.S. side of the effort.

The U.S.-EU summit is also expected to include a communique at its conclusion that will address concerns about China’s provocative behavior, according to the official. 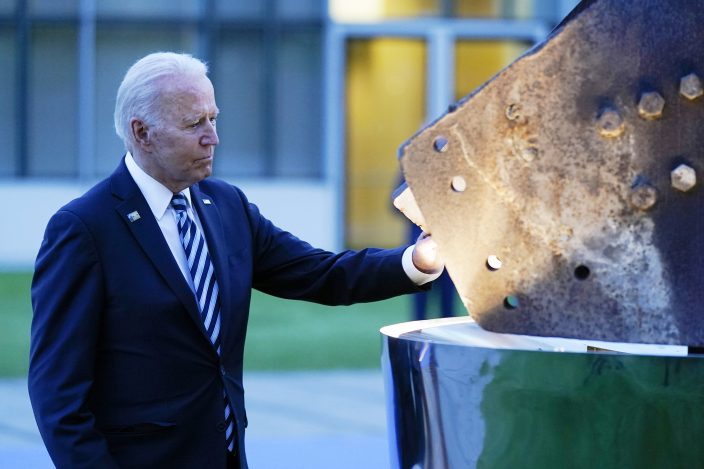 President Joe Biden touches a piece of steel from the North Tower of the World Trade Center while visiting a memorial to the September 11 terrorist attacks at NATO headquarters in Brussels, Monday, June 14, 2021. (AP PhotoPatrick Semansky)

Tuesday's statement would follow a NATO summit communique on Monday that declared China a constant security challenge and said the Chinese are working to undermine global order. On Sunday, the G-7 called out what it said were forced labor practices and other human rights violations impacting Uyghur Muslims and other ethnic minorities in the western Xinjiang province

Since taking office in January, Biden has repeatedly pressed Putin to take action to stop Russian-originated cyberattacks on companies and governments in the U.S. and around the globe, decried the imprisonment of Russian opposition leader Alexei Navalny, and publicly aired intelligence that suggests — albeit with low to moderate confidence — that Moscow offered bounties to the Taliban to target U.S. troops stationed in Afghanistan.

Both Biden and Putin have described the U.S.-Russia relationship as being at an all-time low.

The Europeans are keen to set up a “high-level dialogue” on Russia with the United States to counter what they say is Moscow’s drift into authoritarianism and anti-Western sentiment.

At the same time, the 27-nation bloc is deeply divided in its approach to Moscow. Russia is the EU’s biggest natural gas supplier, and plays a key role in a series of international conflicts and key issues, including the Iran nuclear deal, and conflicts in Syria and Libya.

The hope is that Biden’s meeting with Putin on Wednesday might pay dividends, and no one in Brussels wants to undermine the show of international unity that has been on display at the G-7 and NATO summits, according to EU officials.

In addition to scolding China, NATO leaders in their communique on Monday took a big swipe at Russia, deploring its aggressive military activities and snap wargames near the borders of NATO countries as well as the repeated violation of the 30-nations’ airspace by Russian planes.

They said that Russia has ramped up “hybrid” actions against member countries by attempting to interfere in elections, political and economic intimidation, disinformation campaigns and “malicious cyber activities.”

“Until Russia demonstrates compliance with international law and its international obligations and responsibilities, there can be no return to ‘business as usual,'" the NATO leaders wrote. “We will continue to respond to the deteriorating security environment by enhancing our deterrence and defense posture.”