Johnny Lorenzo Bolton was lying with his eyes closed on a couch in his apartment near Atlanta when police serving a narcotics search warrant burst through the front door with guns drawn and no warning.

Bolton stood up and at least one of the officers fired, sending two bullets into Bolton's chest. The 49-year-old Black man died from his injuries.

Details of the pre-dawn encounter in December — most of which come from a lawyer representing Bolton’s family — resemble a case that is well known nationwide: the killing nine months earlier of Breonna Taylor in Kentucky. The 26-year-old Black woman also died after being shot by officers serving a drug search warrant at her apartment. 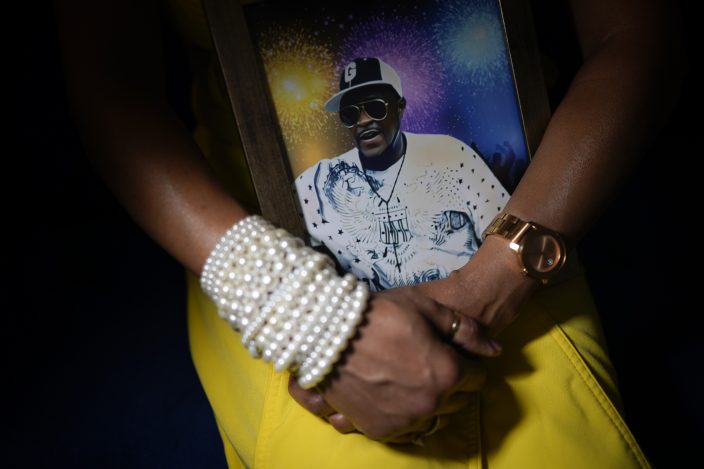 Daphne Bolton poses for a portrait holding a photograph of her brother at her home on Monday, May 31, 2021, in Charlotte, N.C. Bolton's brother, Johnny Lorenzo Bolton, a 49-year-old Black man was shot to death by a Cobb County Sheriff's Office SWAT team member serving a search warrant last December. (AP PhotoChris Carlson)

But unlike Taylor’s, Bolton’s name is not painted in large letters on protest signs or mentioned in the ongoing nationwide discussions on racial injustice and police brutality that began after Taylor’s death in March 2020 and that of George Floyd, who died under the knee of a Minneapolis police officer in May 2020.

Bolton’s relatives and their lawyers wanted to try to get information about the shooting from law enforcement before drawing attention to his killing, they said. Frustrated in those efforts, the attorneys sent a draft of a lawsuit to Cobb County officials in mid-April along with a letter threatening litigation if county officials didn’t provide more information and address accountability and compensation for Bolton's death.

“For almost six months, we gave them quiet,” Bolton's sister Daphne Bolton said in a recent interview with The Associated Press. “That lets me know that’s not what gets a response.” 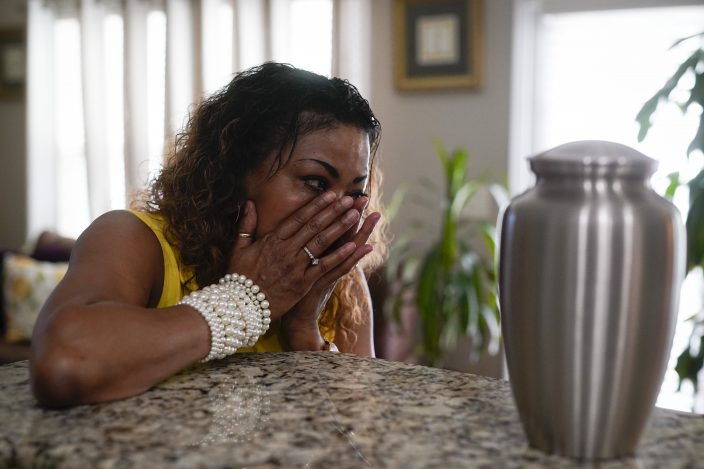 Daphne Bolton wipes away tears as she looks at an urn containing the ashes of her brother at her home on Monday, May 31, 2021, in Charlotte, N.C. Bolton's brother, Johnny Lorenzo Bolton, a 49-year-old Black man was shot shoot to death by a Cobb County Sheriff's Office SWAT team member serving a search warrant last December. (AP PhotoChris Carlson)

The specifics of Taylor’s killing have been laid out in detail: Police arrived after midnight and used a battering ram to knock open the door. Taylor’s boyfriend, Kenneth Walker, said he grabbed his gun and he and Taylor got out of bed and walked toward the door. Police say they knocked and identified themselves. Walker said he didn’t hear them say police and feared the officers were intruders. He fired once, hitting an officer in the leg. Three officers returned fire, discharging a total of 32 bullets, five of which hit Taylor.

Far fewer details about Bolton’s death have been released. 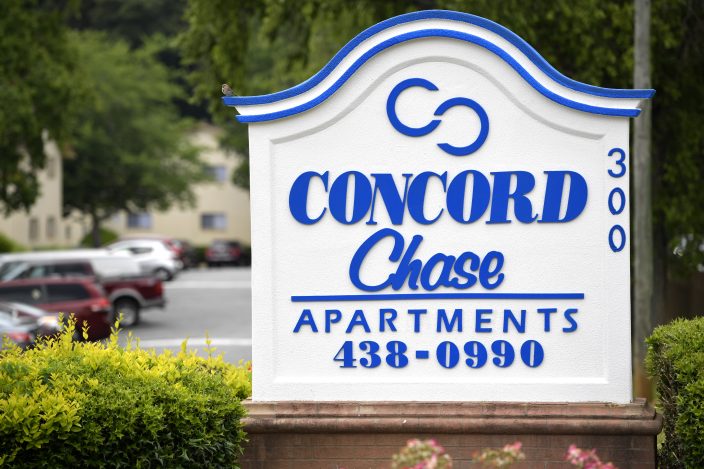 This Monday, June 14, 2021 photo shows a sign for the apartment complex in Smyrna, Ga., where Johnny Lorenzo Bolton was shot in December by the Cobb County Sheriff's Office SWAT team. Bolton was on a couch in his apartment near Atlanta when police serving a narcotics search warrant burst through the front door with no warning. A lawyer for the family says that when the 49-year-old Bolton stood up from the couch, at least one of the officers fired, hitting him with two bullets. (AP PhotoMike Stewart)

In a bare-bones news release issued the day he died, the Georgia Bureau of Investigation, or GBI, which investigates shootings involving police at the request of local agencies, said officers had executed a narcotics search warrant at a Smyrna apartment around 4:40 a.m. on Dec. 17.

“During entry into the residence, a SWAT team member discharged his firearm and an occupant of the apartment was struck,” the release said.

It was a Cobb County Sheriff’s Office SWAT team. The agency has said it’s cooperating with the investigation. 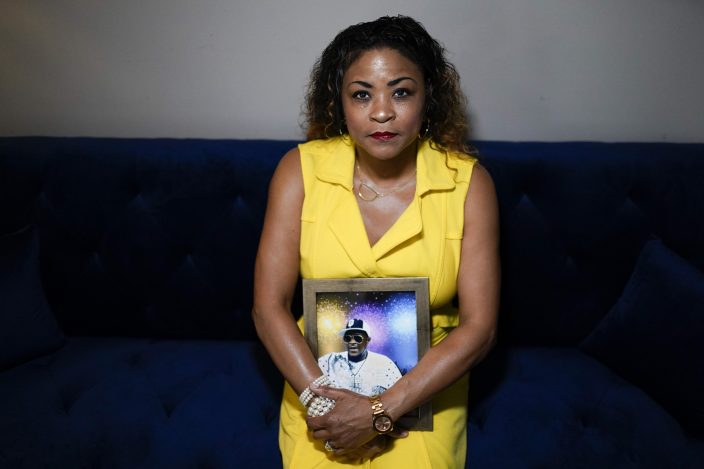 Daphne Bolton poses for a portrait holding a photograph of her brother at her home on Monday, May 31, 2021, in Charlotte, N.C. Bolton's brother, Johnny Lorenzo Bolton, a 49-year-old Black man was shot to death by a Cobb County Sheriff's Office SWAT team member serving a search warrant last December. (AP PhotoChris Carlson)

The GBI said it turned over its investigative file to the Cobb County district attorney’s office on March 16.

The district attorney’s office has said it’s still investigating and — as it does with all cases involving shootings by police — plans to present the case to a grand jury.

In a letter responding to the family's lawyers, an attorney representing Cobb County said officials were reviewing the claims raised by the family's lawyers but they “believe there are several material inaccuracies” in the draft lawsuit and accompanying letter. County officials have declined requests from the AP for documents detailing the shooting, citing an exemption in the state’s open records law for material related to an ongoing investigation. 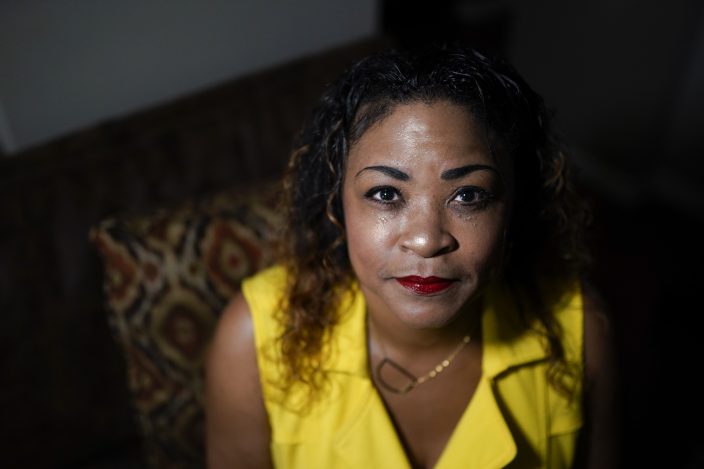 The two-bedroom apartment where Bolton lived served as an unofficial boarding house, according to Zack Greenamyre, one of the family's lawyers. A woman and her teenage daughter lived in one bedroom, another woman rented the other bedroom, and Bolton slept on a couch in the living room, Greenamyre said.

As part of an investigation targeting a suspected drug dealer, police served two warrants at roughly the same time: one at a townhouse where the suspected dealer lived and the second at the apartment where Bolton lived, which police said was paid for by the alleged dealer. The officer who provided sworn statements for both warrant applications said they were based on information from a confidential law enforcement source and surveillance. The officer said the confidential informant bought cocaine at the apartment in September and that drug sales continued there in December.

The officer asked for a “no-knock” warrant, which allows police to enter without announcing themselves. He cited the criminal histories of people who were known to associate with the suspected dealer at the apartment and previous reports of guns seen there.

Greenamyre says the warrant for the apartment was based on false and outdated information and that the apartment was purely residential, with no drug sales taking place there. Bolton’s name doesn’t appear in the paperwork for either warrant.

Greenamyre said witnesses told him Bolton was lying on a couch with his eyes closed, possibly sleeping, when officers crashed through the door. He stood in response to the noise and was shot by police, the witnesses said. They also said that as Bolton lay dying, officers didn't immediately provide first aid but instead handcuffed him.

“The limited information available to the family now does not make this look like a justified shooting,” said the letter accompanying the draft lawsuit.

About two weeks after the shooting, police got additional arrest warrants for the alleged dealer, who had already been arrested in the raid on the townhouse, and his brother, saying the pair had access to a locked closet in the apartment where a backpack containing drugs was found.

Police also got arrest warrants for two women and a man who were in the apartment with Bolton when police entered. The warrants charge all three with possession of a gun despite prior felony convictions after one gun was found in the kitchen and another in a bedroom. The man also had a backpack containing cocaine, marijuana and methamphetamines, a warrant says.

Daphne Bolton, who says her brother was a talented singer with a big heart, wants to know why he was shot and wants the officers involved to be fired and charged. She also wants an end to “no-knock” warrants.

Bolton said she was at work at a bank in Charlotte, North Carolina, on Dec. 17 when she got a Facebook message from her brother's daughter saying he'd been shot. The hours that followed are a blur, but she remembers pacing in her home, calling hospitals near Atlanta to try to find him before eventually learning he'd died.

Her anger and grief are still raw.

The two siblings were born about a year apart and grew up, along with an older sister who died five years ago from complications of multiple sclerosis, in a tightknit family in Mississippi. As teenagers, they moved to South Carolina with their mother after their parents divorced.

Johnny Bolton never really liked school, but he was funny and well liked and drew a crowd when he'd sing in public. He began dabbling with drugs in his late teens, possibly as a way to cope with their parents' divorce, his sister said. He moved to the Atlanta area as a young man.

Daphne Bolton saw her brother a couple of times a year, but spoke to him more often. She treasures a memory from one of her birthdays when her brother came to surprise her and the family went bowling. Since his death, she's regretted not going to a family reunion last summer where he was set to sing.

Johnny Bolton loved women and always had a girlfriend, some of whom reached out to his sister for advice about him. He'd been working at a carwash and was popular with customers and staff there, Daphne Bolton said.

Johnny Bolton ran into trouble with the law over the years, mostly drug and misdemeanor offenses, and spent some time locked up. He'd often call his sister to ask for money and she'd send it. Even though she didn't agree with some of her brother's choices, she figured it was safer if he got money from her.

“He always told me, he said, ‘Baby Sis, I’m gonna get better.’ I said, ‘I know you are,’” Daphne Bolton said through tears. “I never gave up hope that he would get better. Now I, unfortunately, will never get to see that day.”