Iran's presidential election on Friday, though likely more a coronation for a hard-line candidate long cultivated by Supreme Leader Ayatollah Ali Khamenei, still carries implications for a wider Middle East already roiled by years of tensions between Tehran and the West.

Khamenei holds final say over Iran's military and its nuclear program, but the presidency does control domestic matters such as the economy, and serves as the public face of the Islamic Republic.

Its decisions, though on a narrow bandwidth, can affect how the rest of the world interacts with Iran. The far different tenures of hard-line President Mahmoud Ahmadinejad and that of the relative moderate President Hassan Rouhani, whose administration reached the 2015 nuclear deal with world powers, are a stark reflection of that. 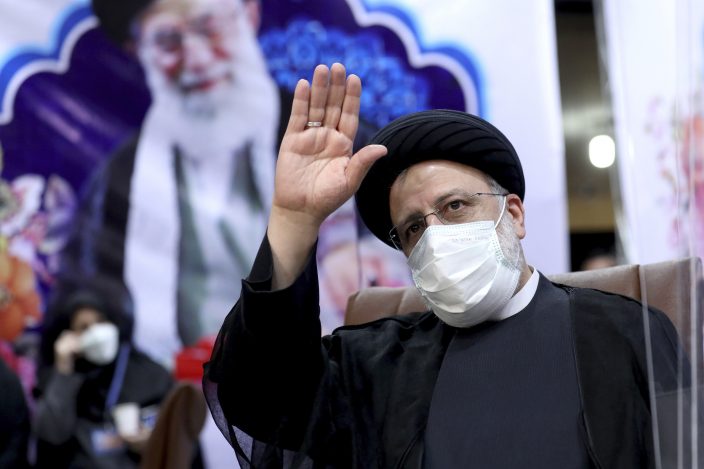 FILE - In this May 15, 2021 file photo, Ebrahim Raisi, head of Iran's judiciary, waves to journalists while registering his candidacy for the upcoming presidential elections, in Tehran, Iran. The presidential election on Friday, June 18, is likely to be a coronation for Raisi, a hard-line candidate long cultivated by Supreme Leader Ayatollah Ali Khamenei, shown in poster. (AP PhotoEbrahim Noroozi, File)

How an administration overseen by hard-line judiciary chief Ebrahim Raisi would behave, remains in question. Raisi — who analysts and polling suggest is the clear front-runner after a panel overseen by Khamenei disqualified his major rivals — already faces strong skepticism from the West. That is in part for running a judicial system in Iran that remains one of the world's top executioners and sees its Revolutionary Courts operate many trials behind closed doors.

In 2019, the U.S. Treasury under President Donald Trump sanctioned Raisi “for his administrative oversight over the executions of individuals who were juveniles at the time of their crime and the torture and other cruel, inhuman or degrading treatment or punishment of prisoners in Iran.”

Raisi as the head of the judiciary also oversees a system long criticized by families of detainees and activists as targeting dual nationals and those with Western ties to use them as bargaining chips in negotiations. 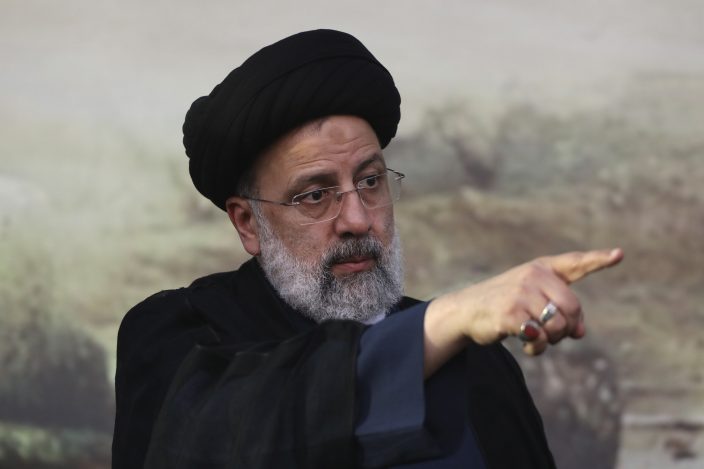 FILE - In this June 6, 2021 file photo, Presidential candidate Ebrahim Raisi, points during a campaign rally in Eslamshahr, southwest of Tehran, Iran. The presidential election on Friday, June 18, is likely to be a coronation for Raisi, a hard-line candidate long cultivated by Supreme Leader Ayatollah Ali Khamenei. (AP PhotoVahid Salemi, File)

The Treasury also noted Raisi's time in the Tehran's prosecutor's office, describing him as being “involved” in the security force crackdown on Iran's 2009 Green Movement protests surrounding Ahmadinejad's disputed re-election at the time. The Treasury said Raisi participated in the so-called “death panels” of 1988, which Amnesty International says oversaw the execution of as many as 5,000 people at the end of the Iran-Iraq war.

President Joe Biden's administration so far has made no move to remove Raisi from the sanctions list. The State Department and the Treasury declined to answer questions about how sanctions on Raisi could affect American foreign policy if he's elected.

It probably would not help matters that Raisi in early January threatened Trump — still president at the time — with assassination while speaking at the first anniversary of the U.S. drone strike in Baghdad that killed Iranian Gen. Qassem Soleimani. 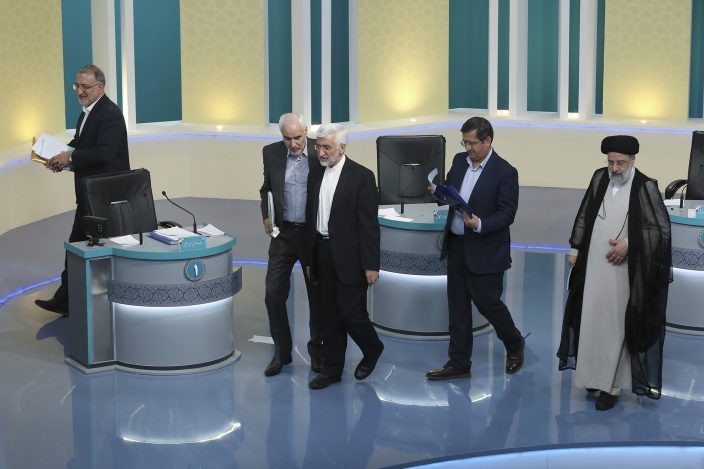 “The enemy should not think that if someone (who) appeared in the guise of the American president (and) is responsible for the assassination, they will be safe from justice," Raisi said then. "None will be safe anywhere in the world. The resistance is determined to take revenge.”

In recent presidential debates, however, Raisi said he would oversee a return to the nuclear deal reached by Rouhani. That accord saw Iran limit its enrichment of uranium in exchange for the lifting of economic sanctions. Since Trump's unilateral withdrawal of America from the agreement, Iran has been enriching small amounts of uranium to up to 63% purity — a record high though still below weapons-grade levels of 90%.

Iran's economy has cratered since America's withdrawal from the accord. Rejoining the deal, even though the agreement remains despised by hard-liners, could help ease the economic hardship.

The deal “would not be executed by you," Raisi told his moderate competitor, Rouhani's former Central Bank chief Abdolnasser Hemmati, at the final pre-election debate Saturday. “It needs a powerful government to do this.”

Those remarks followed his previous comments during his failed 2017 campaign for president against Rouhani, in which he compared the deal to a “check that has not been cashed” through government inaction.

Raisi has not offered other hints on foreign policy during the campaign, though he's praised the Lebanese militant group Hezbollah in the past and criticized normalization efforts between Israel and Arab nations as undermining the Palestinians. A return to the nuclear deal could have a knock-on effect for Hezbollah as Iran is its main patron, freeing up cash as Lebanon faces what the World Bank has described as the world's worst financial crisis since the 1850s.

Iran's Gulf Arab neighbors meanwhile have sought to improve ties in recent months as they anticipate a return by the Biden administration to the nuclear deal.

Saudi Arabia and Iran held talks in Baghdad in April, with Riyadh likely hoping it can avoid a direct confrontation such as the one it saw in 2019, when a suspected Iranian attack struck the heart of its oil industry. The United Arab Emirates, home to Abu Dhabi and Dubai, similarly held talks after tankers off its coast came under attack in another assault suspected to have been carried out by Tehran. Those attacks, as well as others in a shadow war between Tehran and Israel, can be linked directly back to Trump's withdrawal from the deal.

That doesn't mean a rapprochement with Tehran is immediately in the cards. But that hedging could indicate a possibly easier time for Raisi in managing ties to other countries, especially to the UAE, which had been a crucial economic outlet for Iran.

But for Raisi himself, the immediate danger may be coming from inside Iran itself. Anger over its ailing economy has seen nationwide protests erupt twice in recent years and spin out of control. Polling from the state-linked Iranian Student Polling Agency puts turnout — long viewed by officials as a sign of support for the theocracy — on track to be the lowest since the 1979 Islamic Revolution.

With that public disenchanted with the government, Raisi is likely to soon become its face both at home and abroad.