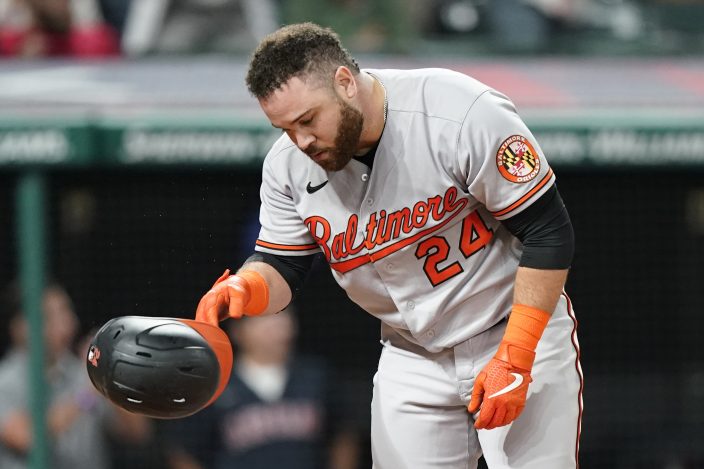 Baltimore Orioles' DJ Stewart drops his helmet after striking out in the eighth inning of a baseball game against the Cleveland Indians, Monday, June 14, 2021, in Cleveland. (AP PhotoTony Dejak)

Washington right-hander Max Scherzer won't take his scheduled turn in the rotation Wednesday due to tightness in his groin.

And starter Tyler Glasnow of the Tampa Bay Rays was expecting to get an MRI after leaving Monday’s game against the White Sox with right elbow inflammation.

Bieber allowed a season-high 10 hits and threw 107 pitches over five innings Sunday in a loss to Seattle. The 26-year-old righty was put on the injured list for the first time in his career.

“We’re still obviously reaching out for more information and sending the images to different doctors and things like that, trying to get the best information we can,” Indians manager Terry Francona said.

Scherzer threw a bullpen Monday that lasted only 10 pitches because his groin would not loosen up. The three-time Cy Young Award winner said it’s up to manager Dave Martinez whether he goes on the injured list or simply has his start pushed back a few days. Scherzer tweaked his groin Friday against the Giants and got only one out.

Glasnow tossed four innings Monday night and left with Tampa Bay leading 3-2. The 6-foot-8 right-hander said he sensed something wasn’t right in the elbow as he made his final pitches in the fourth.

"The last couple of pitches I felt just a little tug,” Glasnow said. “I didn’t want to go out and chance it. The velo was still there, it just felt not right.”

Approaching a dubious record, the Arizona Diamondbacks try to avoid their 21st consecutive road loss when they visit the San Francisco Giants. The major league mark is held by the 1963 New York Mets, who dropped 22 in a row away from the Polo Grounds.

Arizona has lost 11 straight overall, its second double-digit losing streak this season after a 13-game skid from May 17-29. With the worst record in the big leagues, the Diamondbacks (20-47) haven't won on the road since a 7-0 victory at Atlanta on April 25.

Meanwhile, the Baltimore Orioles have dropped 16 in a row on the road heading into their game at Cleveland. Matt Harvey (3-7), who has lost seven of his past eight starts, faces Cal Quantrill (0-2) and the Indians.

Baltimore hasn’t won away from home since John Means pitched a no-hitter in Seattle on May 5.

The 25-year-old lefty is 0-0 with a 1.53 ERA in three starts, covering 17 2/3 innings. Davidson made his big league debut last season and lost in his only outing.

Padres ace Yu Darvish starts against Colorado for the third time this season, taking on Charlie Blackmon at Coors Field.

Darvish (6-2, 2.28) pitched a season-low four innings at Coors on May 12 despite allowing just an unearned run. He beat the Rockies in his next start, striking out 10 in seven scoreless innings.

Outfielder George Springer is set to begin a rehabilitation assignment with Triple-A Buffalo, with no definite timetable on when he’ll rejoin the Blue Jays. Toronto manager Charlie Montoyo said Springer is expected to play five innings in the field at Rochester.

The 2017 World Series MVP with Houston, Springer signed a six-year, $150 million deal with the Blue Jays this winter. He started the season on the injured list with a strained right quadriceps muscle and lasted just four games when he returned in April before going back on the IL with the same problem.

The 31-year-old Springer is 3 for 15 with two home runs for the Blue Jays.