The last time Patrick Reed teed it up at Torrey Pines, he had to dodge yet another rules controversy before hoisting the trophy at the Farmers Insurance Open.

Now he’s got an Open of a different magnitude in front of him. He likes his chances of adding a second major championship to the Masters title he won in 2018.

And, so far at least, he’s done nothing to get tongues wagging once again. 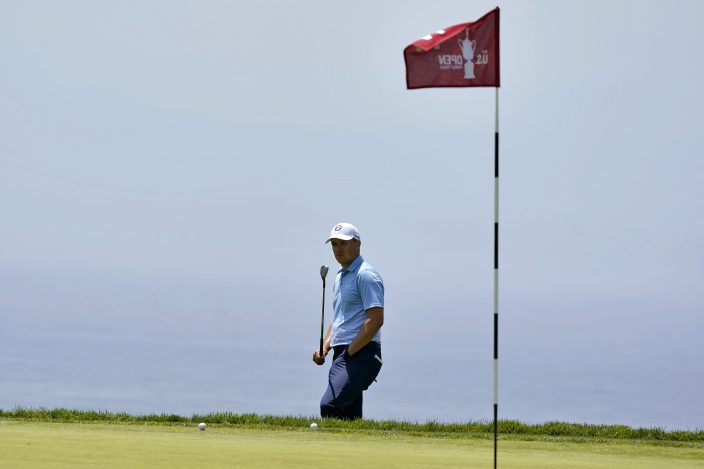 Jordan Spieth watches his shot on the 14th green during a practice round of the U.S. Open Golf Championship, Tuesday, June 15, 2021, at Torrey Pines Golf Course in San Diego. (AP PhotoMarcio Jose Sanchez)

Five months after winning his ninth PGA Tour title at the Farmers, Reed returns to a golf course that is both familiar and somewhat different. He does it brimming with confidence that his game is in good shape and that he’s has proven it’s a golf course he can play — and play very well.

What was cold and wet then is now dry and mostly warm. The course will play faster, and that’s an adjustment all by itself.

Add in the rough that the USGA likes to torment players with, and it’s a different animal with the same skin.

Fun is not a word usually heard uttered by players at the Open, but Reed is not the typical PGA Tour player. He seems to play better when things get a little tough, and play even better when he finds a way to make it even tougher.

That’s what happened in January, when Reed was involved in a rules controversy in the third round as he moved into a tie for the lead in a tournament he eventually won by five shots. Reed picked up his ball on the 10th hole, believing it was embedded even though others saw it bounce once before settling in the deep grass.

He was eventually given a free drop, much to the consternation of many watching on TV, and tour officials cleared him of any wrongdoing. Coming off an incident in 2019 at Tiger Woods’ Hero World Challenge where he was penalized two strokes for appearing to deliberately improve his lie in a bunker, though, it rubbed some people the wrong way.

Reed didn’t address the incidents — and wasn’t asked about them — on a day when so many storylines were swirling around this Open that he was almost an afterthought. But he did give notice that he expects to contend this week, and his mind is full of good memories from a win just months earlier.

“I think the biggest thing is it’s playing firmer and faster with it a different time of year, and with it being a little warmer, the ball is traveling farther,” he said. “With that, it’s still Torrey Pines. It’s brutal if you miss a fairway, brutal if you miss a green. You have to make putts early in the day because, as the days go on, the greens get a little bumpier with the poa and make everything just a little tougher.”

Reed will get a test on the greens early with an afternoon time on the 10th tee Thursday. He’s playing with Jon Rahm, back from his positive COVID-19 test, a pairing that should get a lot of attention both on course and on TV.

A win would make him a two-time major champion, which would surely make Reed happy.

Doing it without any controversy would make the folks at the USGA quite happy, too.