A federal jury is deciding whether one of the nation's biggest private prison companies must pay minimum wage — instead of $1 a day — to immigration detainees who perform tasks like cooking and cleaning at its jail in Washington state.

Democratic Washington Attorney General Bob Ferguson sued the Florida-based GEO Group in 2017, saying the company had unjustly profited by running the Northwest detention center in Tacoma on the backs of captive workers.

A separate lawsuit filed on behalf of detainees was also filed that year, seeking back pay. Tacoma-based U.S. District Judge Robert Bryan, who rejected several attempts by GEO to dismiss the lawsuits, consolidated the cases for trial, which he conducted via Zoom because of the pandemic. 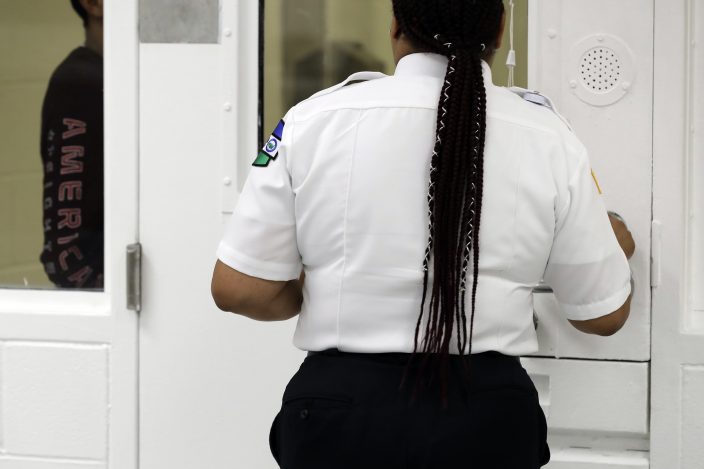 In this photo taken Sept. 10, 2019, a detainee wearing a shirt that says "America" on its sleeve is kept in a holding area at the GEO Group’s immigration jail in Tacoma, Wash., during a media tour. After nearly four years of litigation and pandemic-related delays, a federal jury on Tuesday, June 15, 2021, began deliberating whether the GEO Group must pay minimum wage to detainees who perform cooking, cleaning and other tasks at the facility – instead of the $1 per day they typically receive. (AP PhotoTed S. Warren)

“What GEO is doing to exploit captive detainee workers at the Northwest detention center is for real — and at a massive scale,” Assistant Attorney General Andrea Brenneke told the jury in closing arguments Tuesday. “GEO could easily pay detainee workers the minimum wage and still make millions of dollars in profits from the facility each year.”

GEO's response is that the detainees simply aren't employees. Even if they were, the company says, it would be unlawfully discriminatory for Washington to require GEO to pay them minimum wage — now $13.69 an hour — when the state doesn't pay minimum wage to inmates who work at its own prisons or other detention facilities.

In her closing argument, GEO attorney Joan Mell accused the state and detainee advocates of using the lawsuits to attack the immigration detention system. GEO has operated the detainee work program for more than a decade, and the state made no effort to get the company to pay the minimum wage until 2017, amid a flurry of lawsuits Ferguson filed against the Trump administration. 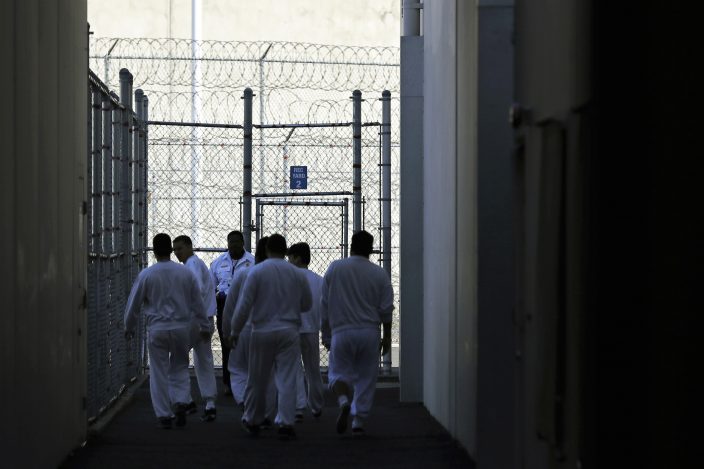 In this photo taken Sept. 10, 2019, detainees walk toward a fenced recreation area at the GEO Group’s immigration jail in Tacoma, Wash., during a media tour. After nearly four years of litigation and pandemic-related delays, a federal jury on Tuesday, June 15, 2021, began deliberating whether the GEO Group must pay minimum wage to detainees who perform cooking, cleaning and other tasks at the facility – instead of the $1 per day they typically receive. (AP PhotoTed S. Warren)

“If the plaintiffs can prove the Minimum Wage Act is – quote — applicable ... then they can reform immigration detention without ever having to go to Congress,” she said. “They’re taking a shortcut via the courthouse to get what they want.”

The Northwest detention center houses people who are in custody while the government seeks to deport them or reviews their immigration status. It can hold up to 1,575 detainees, making it one of the nation's largest immigration jails, though as of early this month its population was just 216, largely due to the pandemic.

U.S. Immigration and Customs Enforcement, which pays GEO to run the facility, requires the company to operate a “voluntary work program” to keep the detainees occupied. It requires them to be paid at least $1 per day for work that includes cleaning bathrooms, showers and industrial kitchens; washing and folding laundry; sweeping and buffing floors; preparing and serving food; and cutting hair.

Former detainees testified that they worked because they needed money to buy extra food or clothing at the commissary or to make phone calls to loved ones.

The shifts often last just an hour or two. GEO's own analysis said it that if detainees didn't do the work, it would need to hire 85 full-time workers from the community.

GEO's contract with ICE also requires it to comply with applicable state and local law — which, the state says, includes the Washington Minimum Wage Act.

Washington appears to be the only state suing a private detention contractor for not paying minimum wage to immigration detainees. But similar lawsuits have been brought on behalf of immigration detainees in other states, including New Mexico, Colorado and California, seeking to force GEO and another major private detention company, CoreCivic, to pay minimum wage to detainees there.

The Colorado and California cases are pending, but a federal judge rejected the lawsuit brought by former detainees of CoreCivic's Cibola detention center in New Mexico — a decision upheld by a federal appeals court panel in March.

“Persons in custodial detention—such as appellants—are not in an employer-employee relationship but in a detainer-detainee relationship,” the panel wrote.

That is the crux of GEO's argument in the Washington case. The company acknowledges it has the money to pay detainees the minimum wage if it wants. In 2018 GEO made $18.6 million in profits from the facility; it would have cost $3.4 million to pay the minimum wage to detainees.

Mell also pointed to provisions in GEO's contract with ICE that state that any employees GEO hires must have legal status in the U.S. Many of the detainees don't. “The contract spells it out: The detainees are not employees,” Mell said. “They can’t be.”

But the definition of “employee” in Washington's minimum wage law is extremely broad — it includes anyone who is permitted to work by an employer, without regard to immigration or legal work status. The law says residents of “a state, county, or municipal" detention facility are not entitled to minimum wage.

According to lawyers for the state and for the detainees, that exception doesn't cover a private, for-profit jail such as GEO's. Further, GEO oversaw the scheduling and performance of the work just as a typical employer does, they said.

If the jury finds that the minimum wage law applies to GEO, a second phase of the trial will be held to determine damages. Jurors did not reach a verdict Tuesday; they were to resume deliberations Wednesday.

In a separate effort, Washington is trying to close the detention center entirely. This spring Gov. Jay Inslee signed a law that would ban for-profit detention centers in the state. GEO has sued to block it.