Yan Gomes connected for a grand slam and Trea Turner got four hits, leading Patrick Corbin and the Washington Nationals over the Pittsburgh Pirates 8-1 on Tuesday night.

The Nationals won their third in a row and sent Pittsburgh to its ninth straight loss.

Corbin (4-5) pitched 8 1/3 innings, allowing one run and eight hits. He struck out seven and walked one while going at least eight innings for the first time since Aug. 21, 2019. 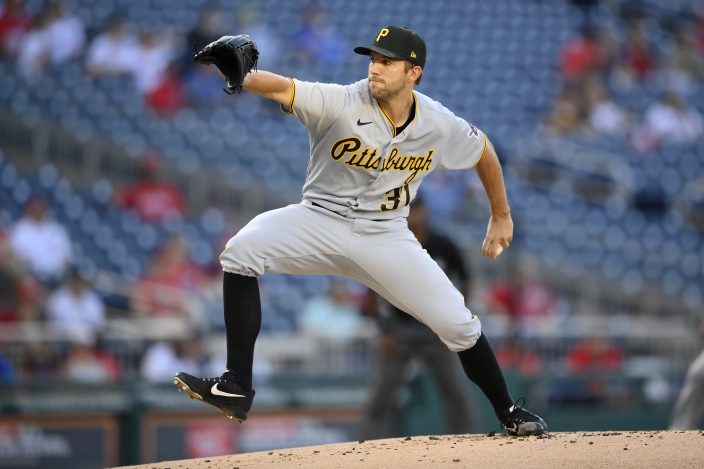 Gomes’ slam finished a five-run first inning against Tyler Anderson (3-7). It was Gomes’ first grand slam since joining the Nationals in 2019 and the fourth of his career.

Kyle Schwarber led off the bottom of the first with one of three consecutive singles by the Nationals to start the inning. Ryan Zimmerman struck out with the bases loaded before Josh Harrison hit an RBI single and Gomes followed with his home run to left field.

The Nationals entered the game with a league-worst .460 OPS with the bases loaded this season. They'd hit one other grand slam — Josh Harrison against Baltimore — before Gomes connected. Prior to that, Washington had struck out 21 times and picked up only eight hits with the bases loaded in 2021. 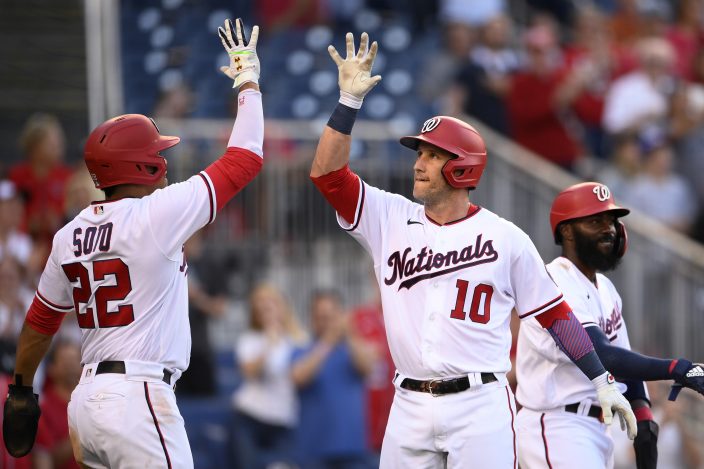 Turner's first triple of the season made it 6-0 in the fourth.

Phillip Evans doubled home the Pirates’ run in the seventh.

Major League Baseball announced Tuesday it will begin cracking down on the use of “sticky stuff” by pitchers on June 21. Both managers in this game were glad at least the rules will be clear. 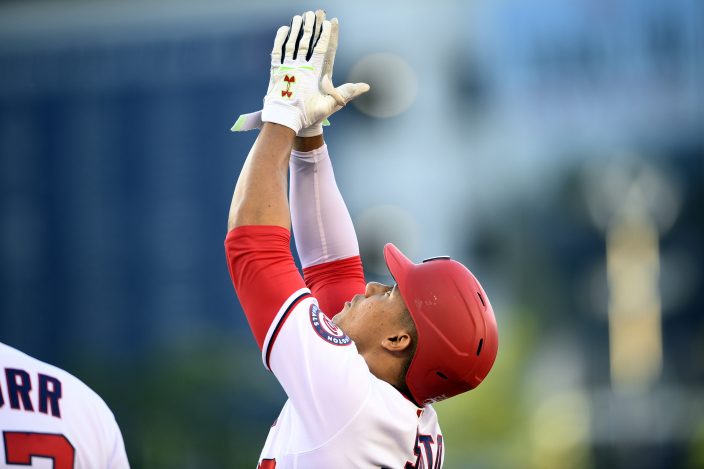 Washington Nationals' Juan Soto gestures after he hit a single in the first inning of a baseball game against the Pittsburgh Pirates, Tuesday, June 15, 2021, in Washington. (AP PhotoNick Wass)

“MLB is trying to level the playing field,” Nationals manager Dave Martinez said. “They’re trying to find some consistent balance for everyone. My biggest concern is the health of the players. We’re going to have to navigate through this for a few days.”

Pittsburgh manager Derek Shelton was focused on making sure his players were informed of the new changes that prevent anything other than rosin being used to help grip the baseball.

“I don’t want anybody to be in an ambiguous situation where they weren’t aware of what the enforcement might be,” Shelton said.

Pirates: Pittsburgh 3B Colin Moran remains day-to-day after leaving Sunday’s game because of lower back tightness. Shelton said Moran is moving around better. Moran has played 38 of the Pirates’ 65 games this season coming into Tuesday.

Nationals: RHP Austin Voth (nose fracture) threw 23 pitches Tuesday in a simulated game. Voth was placed on the 10-day injured list June 8 (retroactive to June 7) after being struck in the face by a pitch. Martinez said Voth will be put back into the bullpen, as opposed to the rotation, when he returns. The Nationals want to be sure he is comfortable handling balls hit back at him before he pitches again in a game.

Pittsburgh sends RHP Chase De Jong (0-0, 4.80 ERA) to the mound in game three of the three-game series. The Nationals are unsure who their Wednesday starter will be. Max Scherzer was scheduled to pitch Wednesday, but was placed on the 10-day injured list Tuesday because of groin inflammation.