In consecutive visits this month, Vice President Kamala Harris and Homeland Security Secretary Alejandro Mayorkas have conveyed to the most important U.S. partner that the Biden administration is taking a more nuanced approach to immigration than its predecessor, but still asking what more Mexico can do.

Mayorkas said Tuesday at the conclusion of two days of high-level meetings: “We have challenged one another with respect to what more can each of us do to address the level of irregular migration that has persisted for several months.”

In May, encounters with migrants at the U.S.-Mexico border inched up from April to more than 180,000, more than double the number in January, according to data from U.S. Customs and Border Protection. 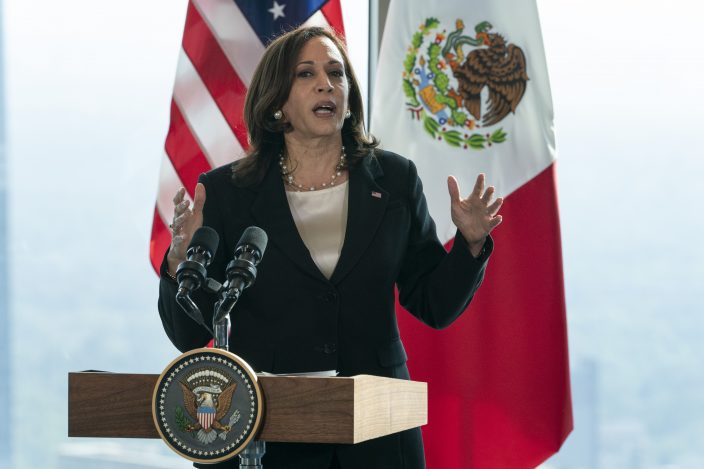 Record arrivals of migrant children have been especially challenging for the Biden administration, as they were for his predecessors, with the U.S. government picking up nearly 60,000 children traveling without their parents across the Mexican border from February to May.

When then President Donald Trump threatened damaging tariffs on all Mexican imports unless Mexico did more to stem the flow of migrants in 2019, Mexico deployed its newly created National Guard to boost enforcement efforts.

The Biden administration is taking what Mayorkas called a “multipronged approach” and he rejected any suggestion that the White House had sent mixed messages that could have encouraged more migration to the border. 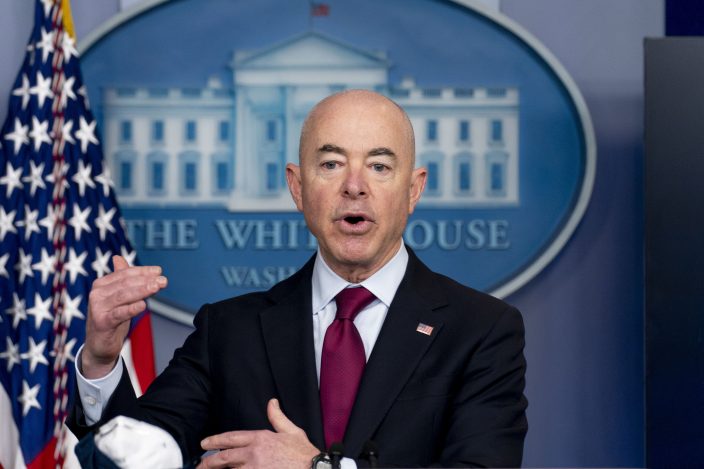 FILE - In this March 1, 2021, file photo, Homeland Security Secretary Alejandro Mayorkas speaks during a news conference at the White House in Washington. The Biden administration says four families who were separated at the Mexico border during Donald Trump’s presidency would be reunited in the United States during the first week of May, the first of what Mayorkas calls “just the beginning” of a broader effort. (AP PhotoAndrew Harnik, File)

Harris is leading U.S. efforts to identify and address the root causes of immigration. On her visit to Guatemala and Mexico earlier this month, she urged Central Americans not to try to reach the U.S. border while also trying to give people a sense of hope that would encourage them to stay home.

The Biden administration has struggled to show a more compassionate face on U.S. immigration policies and undo some of Trump’s harshest measures while not spurring more migration.

Samantha Power, head of the U.S. Agency for International Development, has been visiting the Northern Triangle countries this week announcing new aid aimed at improving conditions there. Power and Harris have spoken against the endemic corruption in the region and the need for greater economic opportunity. 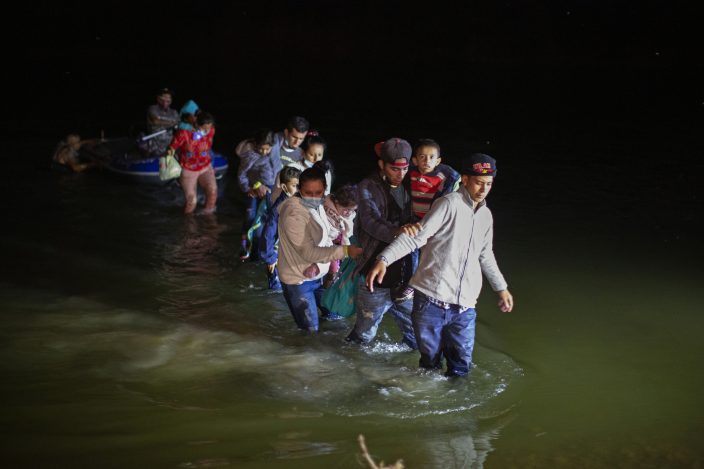 In this March 24, 2021 photo, migrant families, mostly from Central American countries, wade through shallow waters after being delivered by smugglers on small inflatable rafts on U.S. soil in Roma, Texas. The Biden administration said Monday that four families that were separated at the Mexico border during Donald Trump's presidency will be reunited in the United States this week in what Homeland Security Secretary Alejandro Mayorkas calls “just the beginning” of a broader effort. (AP PhotoDario Lopez-Mills)

Mayorkas said other elements of that approach were opening alternative legal pathways to the U.S., including the expansion of the Central American Minors Program announced Tuesday.

The U.S. restarted the program in March for children from Guatemala, Honduras or El Salvador who had applied to be paroled into the United States before Trump ended the program. The expansion announced Tuesday makes eligible families whose parents are in the U.S. with various forms of legal status, including green cards and Temporary Protected Status for designated countries afflicted by natural disasters or civil strife.

Parents with pending asylum claims and people who applied for visas for crime victims before May 15 may also be eligible to bring their children from Central America.

The administration didn’t say how many people may be covered by the expansion but Mayorkas and Secretary of State Antony Blinken said in a joint statement that the changes will “dramatically expand” eligibility.

The visits to the region for Harris, Mayorkas and Power were all their first foreign trips for a new administration, sending a message that the region’s problems have its attention.

Mexico has other priorities, in particular reopening to the U.S.-Mexico border, which has been closed to non-essential travel for more than a year.

On Tuesday, 1.35 million doses of Johnson & Johnson coronavirus vaccine donated by the United States arrived in Mexico. The U.S. vaccine shipment will be used to vaccinate anyone over 18 in four cities along the U.S. border: Tijuana, Mexicali, Ciudad Juárez and Reynosa. Mexico has said the goal is to boost vaccination rates there to levels similar to the U.S. cities they adjoin.

Mexico Foreign Affairs Secretary Marcelo Ebrard said that after the vaccinations “there will be no public health arguments for keeping the border closed.”

Later, Ebrard added via Twitter that he had told Mayorkas that Mexico wanted to accelerate the vaccination of people living along their shared border so that life there can return to normal. “The Secretary indicated that facilitating trade, tourism and travel is his priority,” Ebrard wrote.

“We both also understand the economic consequences of the restrictions on not only the border communities of Mexico, but the border of the United States,” Mayorkas said.

On the touchy subject of security cooperation, Mayorkas said he emerged from a meeting with Mexican Attorney General Alejandro Gertz Manero “optimistic.”

After U.S. authorities arrested former Mexican Defense Secretary Gen. Salvador Cienfuegos last year on drug trafficking charges and then released him under pressure from Mexico, security cooperation between the two countries took a hit. Mexico imposed restrictions on U.S. agents in the country.

“I left that meeting, as I hope the attorney general did, optimistic that those restrictions will not serve as an impediment to address our security imperatives,” Mayorkas said.

Mayorkas declined to pass judgment on Mexico President Andrés Manuel López Obrador’s “hugs not bullets” approach to dealing with Mexico’s drug cartels, saying he did not understand what it means in practice. López Obrador has criticized the policies of his predecessors that prioritized going after cartel leaders.

Mexican leader to talk with Kamala Harris on migration