A look at what’s happening around the majors Wednesday:

Now that Major League Baseball has detailed the coming crackdown on illegal substances, pitchers must get prepared to command their stuff without the same sort of tacky aides. 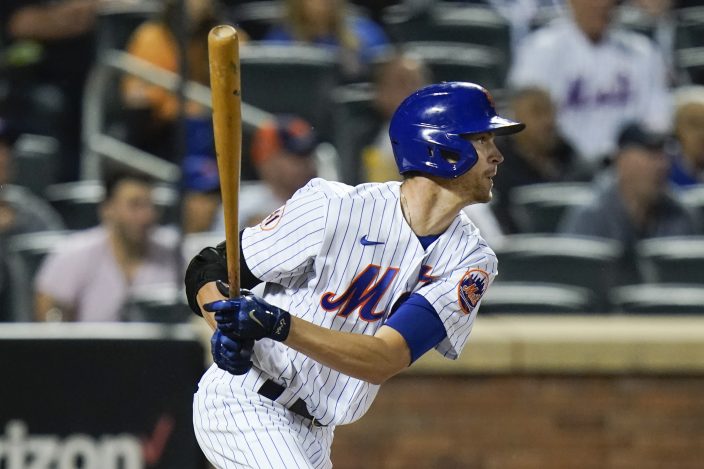 New York Mets' Jacob deGrom (48) follows through on a two-run single during the fifth inning of a baseball game against the San Diego Padres, Friday, June 11, 2021, in New York. (AP PhotoFrank Franklin II)

The commissioner’s office announced that pitchers will be ejected and suspended 10 games for using illicit sticky stuff to better their grip on the baseball. Increased enforcement begins Monday.

Responding to record strikeouts and a league batting average at a more than half-century low, MLB said Tuesday that major and minor league umpires will start regular checks of all pitchers, even if opposing managers don’t request inspections.

While suspensions would be with pay, repeat offenders would receive progressive discipline, and teams and club employees would be subject to discipline for failure to comply.

“After an extensive process of repeated warnings without effect, gathering information from current and former players and others across the sport, two months of comprehensive data collection, listening to our fans and thoughtful deliberation, I have determined that new enforcement of foreign substances is needed to level the playing field,” Commissioner Rob Manfred said in a statement.

The two-time Cy Young Award winner has a 0.56 ERA, the lowest ever for a pitcher through 10 starts. He permitted one hit in six innings last week against San Diego, extending his shutout streak to 22 innings. He has 103 strikeouts and eight walks in 64 innings.

The right-hander has fired 128 of his 839 pitches this season 100 mph or harder. No other starter had more than 10 such pitches before last Friday.

A former college infielder, deGrom has also delivered at the plate. He’s batting .400 with more hits (10) and RBIs (five) than earned runs allowed this season (four).

Tampa Bay ace Tyler Glasnow says he won’t have surgery — for now — to fix a partially torn ligament in his right elbow, and plans to see another doctor on Friday.

An MRI showed the tear and a flexor strain, a day after Glasnow was forced to leave a start after four innings. Glasnow said he’s sure that trying to throw slick baseballs without any grip enhancer helped cause the problem.

“I 100% believe that contributed to me getting hurt,” he asserted Tuesday.

“Just don’t throw for a while, but they also said no surgery,” Glasnow said. “So I’m just going to try and rehab it and try to come back.”

If Glasnow chose to undergo Tommy John surgery, that would sideline him this season and could prevent him from pitching next year, too. The Rays own the best record in the majors after reaching the 2020 World Series.

The AL Central-leading White Sox will be missing sparkplug Nick Madrigal for the rest of the season after the rookie second baseman had surgery to repair tears in his right hamstring.

The scrappy 24-year-old was hurt last week trying to beat out a grounder. He hit .305 while scoring 30 runs and driving in 21 over 54 games, and is still tied for the AL lead with four triples.

Madrigal is expected to be fully recovered by next spring. Danny Mendick and Leury García will take over Madrigal’s spot.

Chicago has been winning despite significant injuries.

Slugging outfielder Eloy Jiménez hasn’t played this season after rupturing his left pectoral tendon in spring training. He was cleared this week to resume baseball activities and the White Sox hope to have him in the lineup down the stretch.

Center fielder Luis Robert is out with torn right hip flexor and also could be back late in the season.