Eric Cole has witnessed golf at the highest levels firsthand.

He watched his father, Bobby, play on the PGA Tour and contend for major championships — even if he couldn't always see the ball in the air. He spent time on the road with his mother, Laura, as she put her name on leaderboards during a long LPGA Tour career.

Now it's Cole's turn to show was he can do under the sport's brightest spotlight. 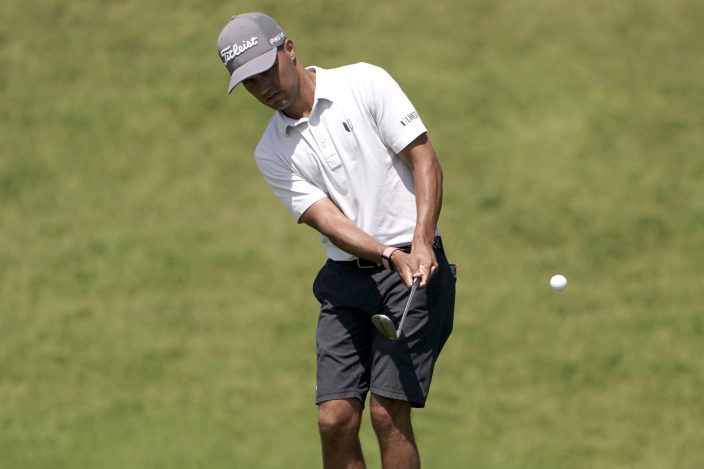 Eric Cole plays a shot on the second green during a practice round of the U.S. Open Golf Championship, Tuesday, June 15, 2021, at Torrey Pines Golf Course in San Diego. (AP PhotoJae C. Hong)

A mini tour veteran, the 33-year-old will play in his first major championship this week at Torrey Pines after qualifying for the U.S. Open.

“I expect to play well. I feel good about my game right now,” Cole said. “I have kind of a high opinion of my game and I'm excited to see where it falls among the best golfers in the world.”

Golf has been as much a part of Cole's life as the thick rough at Torrey Pines during U.S. Open week.

Bobby Cole became the youngest player to win the British Amateur at 18 in 1966 and went on to have a steady PGA Tour career. He won the 1977 Buick Open, took third at the 1974 PGA Championship and 1975 Open Championship, and had two other top-15 finishes at majors.

Eric was still young at the height of his dad's career, but got a chance to travel with his mom on the LPGA Tour.

Laura Baugh's father, Hale, competed at the 1948 Olympics as a pentathlete and was an excellent amateur golfer before becoming a lawyer. Laura followed her father's golf-shoe footsteps and had a similar start to her career as Eric's father, becoming the youngest player to win the U.S. Amateur at 16 in 1971.

She was the 1973 LPGA rookie of the year during a 25-year career, posting 71 top-10 finishes — 10 as runner-up — while piling up endorsements, including Ultra-Brite toothpaste.

Life on the road with his mother gave Cole an insight to life on tour, from the type of skill it takes to succeed to the mental grind of trying to make a living playing golf.

“You see the pros and cons of professional golf,” said Laura, a teaching professional at Sawgrass Country Club in Ponte Vedra Beach, Florida. “You see non success, you see success, you see how you're away from your family, how badly do you want it. You see things like that sooner than if your parents weren't involved with golf. You see success comes from hard work, period.”

Cole has never had a swing coach — at least not one outside of the family.

His father handles more of the technical side, tweaking his swing, working on mechanics. His mother helps with the mental and game management aspects.

Both have shown him the ropes they've already climbed.

Cole played numerous sports as a kid until he realizing his size — 5-foot-9, 155 pounds — was more suited for golf than basketball or football. He turned pro in 2009 after playing at Nova Southeastern University in Florida, winning 36 times on the Minor League Golf Tour before earning eight starts on the then-Web.com Tour in 2017.

Cole has made 26 starts in the 2020-21 Korn Ferry Tour season, ranking 106th with more than $78,000 in earnings. He missed the cut in seven of eight Korn Ferry events heading into U.S. Open qualifying, but shot 66-68 at Dallas Athletic Club last week to earn a spot in his first major.

Next up: a 10th straight week of playing, against the best players in the world on a course lined with rough that swallows golf balls.

It also happens to be a course where Laura, who's from Southern California, won the 1969 Junior World Championship in the girls 13-14 division.

Cole, with an assist from his parents, has been preparing for this moment all his life.